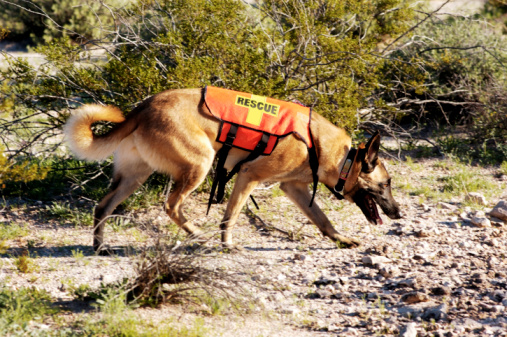 Dogs play many roles in our lives. Some dogs are playmates. Some are guardians. Some are service dogs. And some dogs are best described as heroes. The canines involved in search and rescue missions are heroic dogs that optimize their natural abilities to help distressed people.

What are search and rescue dogs?

Search and rescue (SAR) dogs spring into action assisting humans during difficult times. They track people lost in the wilderness or those lost after a natural disaster. SAR dogs find Alzheimer’s patients who have wandered away from a care facility. They locate people trapped in debris after an earthquake or buried under an avalanche of snow. SAR dogs adapt to a variety of circumstances and work well under pressure.

Why are dogs used for search and rescue work?

Dogs are specially equipped to be rescuers and can home in on a lost person with their amazing sense of smell. With noses that far surpass ours, dogs have more than 100 million sensory receptor sites in the nasal cavity, as compared to 6 million in people. Moreover, the area of the canine brain devoted to analyzing odors is about 40 times larger than the comparable part of the human brain. In fact, it has been estimated that dogs can smell anywhere from 1,000 to 10,000 times better than people. Dogs simply have a “nose” for rescue work.

Humans may readily smell baking cookies, but dogs can detect a lot more because they have an additional olfactory organ that increases their ability to smell. Located inside the nasal cavity, Jacobsen’s organ opens into the roof of the mouth behind the upper incisors. The nerves from Jacobsen’s organ lead directly to the brain and, unlike other nerves in the nose that respond to ordinary smells, these nerve cells respond to a range of substances that often have no odor at all. In other words, they work to detect “undetectable” odors.

What are the types of rescue dogs?

Although all SAR dogs depend on their sense of smell, they are distinguished as either air-scenting or trailing dogs. Air-scenting dogs detect human scent that is airborne and often work off-lead to cover large areas of land. They are usually non-scent-discriminating, meaning that they detect scent from any human as opposed to a specific person.

By comparison, trailing dogs are trackers that can discriminate the scent of a specific person after smelling an article of clothing or object touched by the missing person. These scent-specific dogs track by keeping their noses to the ground, only occasionally raising their heads to detect air-borne particles. Trailing dogs work both on- and off-lead and follow the actual path taken by the missing person.

How do air-scenting dogs work?

Air-scenting dogs follow diffused or wind-borne aromas until they find the site where the smells originated. Once they find the source of the odor, these SAR dogs call their handlers by barking. If the handler is far away, the SAR dog may return to the handler and guide him to the scent's origin, such as a lost person.

Since air-scenting dogs detect air-borne particles, weather conditions affect their job performance. Wind speed, temperature, humidity, and wind direction all impact the dog’s ability to work. Amazingly, despite less-than-optimal conditions, these talented dogs can cover a search area that may range from a few blocks to 150 acres and can detect a scent source as far as ¼ mile away.

Although an astute sense of smell is a common canine trait, some dogs perform better than others. Air-scenting SAR dogs are often herding or sporting breeds, such as Border Collies, German Shepherds, Golden Retrievers, Springer Spaniels, or Labrador Retrievers.

How do trailing dogs work?

Trailing dogs follow a specific scent left behind by a missing person on earth and vegetation. They are so focused in on the scent that they can accurately map turns or even “double backs” taken by the lost person. The discerning noses of tracking dogs can rule out other human scents and focus on the “smell of the day”, an important aspect of successful rescue missions. Since these dogs often work on-lead and move at a slower pace than their air-scenting co-workers, the handlers of tracking dogs are usually close by.

Most people identify Bloodhounds as the premier tracking dog, but other breeds perform well too. Sporting, working, and herding breeds excel at the task. Larger, sturdier breeds can adapt to rough terrains and face grueling conditions. Handlers must also be able to face the physical challenges of search and rescue missions.

Do the two types of SAR dogs ever work together?

In times of disaster, air-scenting and trailing dogs may work together. Air-scenting dogs are released in high-probability areas or places where the lost person is likely to be and scan broad swaths of terrain. Tracking dogs are deployed from the person’s last known point (LKP) or the site of a discovered piece of evidence and maneuver outwards from there. Both types of SAR dogs must be able to work 4-8 hours straight and not be distracted by human rescue workers or wildlife. As crucial team members, handlers must be proficient in wilderness survival techniques when working in rough terrain.

Both air-scenting and tracking dogs can be cross-trained as cadaver dogs that are used to locate the remains of deceased victims. These dogs work over large areas in the event of natural disasters (hurricanes, floods, tornadoes) or small areas (specific crime scenes).

What training is required to become a SAR dog?

A good nose is not enough. A proficient SAR dog needs lots of training, starting with basic obedience skills. Then SAR dogs learn how to track, signal their handlers, and behave appropriately in stressful situations. Their handlers need training, too. Handlers are often trained as law enforcement, fire service, and emergency response professionals.

Young pups begin training as early as 8-10 weeks old and go on the job by 1 or 1 1/2 years of age. Since the job is physically demanding, SAR dogs often retire when they are 5-10 years old. These hard-working canines then enjoy a much-deserved retirement, often alongside their handlers where they are part of the family.