Well trained dogs oblige their masters. They sit, stay, and come when asked. Our faithful companions respond when we speak directly to them. Do they also understand when we talk to other people? Do they grasp our private telephone conversations? Do they comprehend our dinner table discussions? Are our dogs eavesdropping on us? 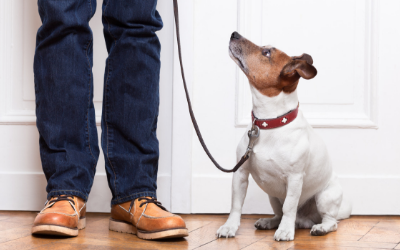 Most dog owners will agree that their dogs understand familiar words. Say, “Sit” and your dog will collapse upon his haunches. Say “Let’s go for a walk” and he’ll run to the door and grab his leash. Say, “It’s time to eat” and he’ll head for the food bowl. It appears that they understand the words sit, walk, and eat leading us to believe that dogs learn to associate specific words with specific actions or objects.

Our dogs may get what we say, but what we say is only part of the equation. How we say it impacts how much a dog comprehends. Dogs interpret human spoken language as well as human body language in their effort to understand us. There are debates regarding just how much each factor (what we say and how we say it) plays in canine communication.

Some people think how we say something can be more important than what we say. Dogs read more into our tone and body language than our actual words. They focus on us and observe our physical clues to determine what we want them to do or not do. They watch our facial expressions, posture, and body movements. They listen to the tone of our voice. They combine all of these observations to determine our meaning.

"Some people think how we say something can be more important than what we say."

If you smile and excitedly say “Let’s go for a walk!”, your dog will likely wag his tail and prance around enthusiastically. If you utter those very same words in a gruff voice with a scowl on your face, he may cower and whine.

Making these observations led many scientists to feel that dogs respond much like human infants in understanding our language. In fact, dogs may have basically the same cognitive ability as a 6-12-month-old human infant. Think about this. Both a dog and a human baby quickly grasp the meaning of “NO!” when grabbing a crumb from the floor and trying to pop it in their mouths. Do they really know the difference between “yes” and “no” or do they respond to our commanding tone of voice and anxious body language?

Could it be a combination of learned vocabulary and observation of body language and tone? With repetition, both dogs and babies will associate certain words with certain objects or actions. That’s why we say, “Sit” over and over while prompting the dog to actually sit. Eventually he associates the word with the action. It’s also why we say “dog” to our baby while pointing to the dog. Eventually the little human understands that this furry creature is called “dog”.

"Body language, tone, and words are all involved in effective canine communication."

Even though many scientists agree that dogs understand specific words, some believe they don’t comprehend full sentences. They feel that saying “trees, birds, grass, walk” invokes the same meaning as, “let’s go for a walk”. While the dog may not understand every word in the sentence, he gets “walk”. And if you say those words with enthusiasm in a sweet voice, your dog will bolt for the front door! Body language, tone, and words are all involved in effective canine communication.

Despite a limited vocabulary, dogs and babies communicate with us. They may not be verbal creatures, but they manage to “speak” back to us. Even without an extensive vocabulary, they make us understand their whines, cries, and coos especially when combined with their own special body language.

Now let’s focus on what we say. Some scientists believe that dogs understand the actual meaning of many words unrelated to the tone in which they are delivered. Here’s how this theory took root.

Researchers trained dogs to lie in an MRI machine. The scientists monitored the dogs’ brain activity while speaking to them. They learned that dogs process language much like humans do. The left side of the brain processes word meaning while the right side interprets intonation. Dogs, like humans, integrate the function of both sides of the brain to arrive at a clearer meaning.

"Some scientists believe that dogs understand the actual meaning of many words unrelated to the tone in which they are delivered."

Some dogs fully activate the brain’s left side learning words regardless of how they are spoken. Case in point—Rico. A border collie named Rico was featured in a 2004 article in Science Magazine because he could “fast map” new words. Rico learned the names of over 200 different items. He could grasp a word’s meaning after hearing it only once, much like young children during their years of language development. Rico also retained the meaning of the words 4 weeks after learning them. This illustrates the dog’s uncanny ability to learn words independent of intonation.

How and What Together 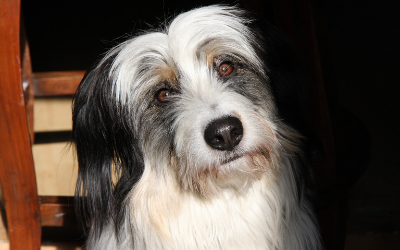 Like most opposing theories, the truth may lie somewhere in the middle. Dogs use both left and right sides of the brain. They read our body language and listen to our tone. They combine all this data to understand us.

In another study with MRI screening, the dog’s left and right sides of the brain were activated when the researcher said “good boy” in a praising tone. The same words spoken in a neutral tone stimulated only the left side of the brain and the dog didn’t always grasp what was said. Furthermore, when study dogs heard random words like “however” in a sweet tone, the right side of the brain was active, while the left was not. This led scientists to believe that dogs understand better when both sides of the brain are in play simultaneously. In other words, what words are said and how they are said are both critical to understanding.

The study also showed that the reward center of the brain that responds to pleasurable sensations like affection, playing, or eating was only activated when the dogs heard words they understood in a tone they liked! So praising your dog is nice, but it’s nicer if you say it sweetly!

What does this mean?

All this research is a good first step in understanding how our dogs interpret our speech. It’s interesting to learn how the canine brain works, but we don’t need scientific studies to know that our dogs understand us. Humans and dogs have lived side by side for generations. The survival of our canine companions is due, in part, to their ability to communicate with their protectors and providers, i.e., us. Spending that much time with anyone should lead to better communication, right?

With that in mind, research may help us have more respect for our dog’s ability to understand not just our words, but also how we say them. The canine ability to comprehend human body language and intonation is amazing. Our dogs know more than just “Sit” or “Stay” or “Walk”. They can learn the meaning of many words and can grasp that meaning even better when we say those words in an appropriate tone. We can talk to our dogs and feel gratified that they “get” us.

But what about eavesdropping?  Do we need to speak softly on the phone so our dog doesn’t overhear our private conversations? Do we need to go in the yard to have an argument?  Who are we kidding??? Our dogs witness almost everything in our lives, so what’s one more conversation? And even if they understand us, we can rest assured that they won’t repeat a single word!