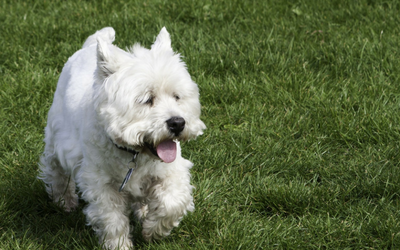 My friend had a West Highland White terrier that died as a puppy. She never grew properly, and once she reached six months of age she became more and more uncoordinated until she could barely get around. My friend had her puppy euthanized, and a test was done that showed a disease called globoid cell leukodystrophy. Her veterinarian said that this disease is always fatal. I don’t really understand why her puppy died so young.

Globoid-cell leukodystrophy (GCL) is also called Krabbe disease, and it is uniformly fatal. GCL is a very rare disease, and it is caused by a mutation on the dog’s DNA. GCL is called a “lysosomal storage disease”. It results in abnormal processing and storage of an enzyme that is critical in the production of myelin, the substance that coats and protects the nerves throughout the brain and spinal cord. The myelin sheath develops until dogs are about 18 months of age. When the myelin is defective, the nerve cells are damaged and destroyed, and they fire randomly resulting in tremors, staggering, weakness, and incoordination.

When do symptoms show up?

Puppies early in life do not generally show signs of GCL. When symptoms emerge, generally between one and six months of age in small terriers, the puppy will begin having tremors and overall muscle weakness. The dog will seem to lose control over its legs. They stop growing normally, and they may develop vision problems. Larger breed dogs with GCL may not show symptoms until between 18months and five years of age

In addition to the neuromuscular symptoms, affected puppies will develop behavior changes, dementia, lack of appetite, starvation from inability to eat properly, and urinary and fecal incontinence. Most dogs must be euthanized due to their neuromuscular decline about two to six months after the onset of clinical signs.

The breeds most commonly affected by GCL include:

How is a definitive diagnosis made?

A definitive diagnosis of GCL can be made with a blood test in Cairn terriers and West Highland White terriers. GCL is known to be caused by a recessive gene which means that both parents must be carriers. Even with two recessive carriers, not all litters or all puppies in a particular litter will have GCL. They may however, be carriers. Reputable breeders work to identify carriers and to eliminate them from their breeding program.