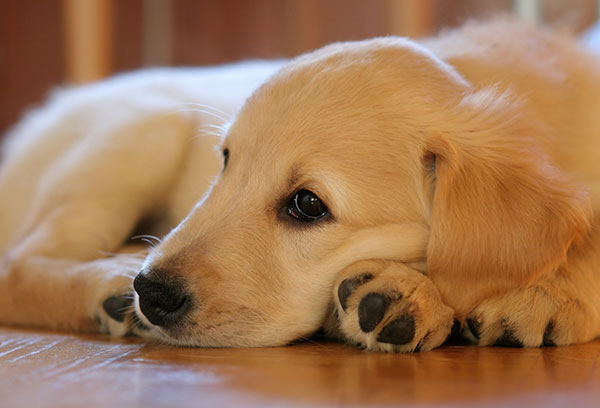 What is muscular dystrophy?

"In dogs with muscular dystrophy, the body produces a defective version of a protein called dystrophin."

In dogs with this form of muscular dystrophy, the body produces a defective version of a protein called dystrophin. Without functional dystrophin, the membranes of muscle cells are leaky. Abnormal dystrophin allows substances that should remain inside the cell to leak out, and allows foreign substances to enter the cell. Leaky cell membranes lead to abnormalities in muscle structure and function.

Other, less common forms of muscular dystrophy also exist, in both dogs and cats. What they all have in common is an abnormality in, or a deficiency of, cytoskeletal proteins that affect muscle health and function.

What are the signs of muscular dystrophy?

The first signs of muscular dystrophy are a stiff gait or a dog that “bunny hops” awkwardly with his back legs. These dogs also have decreased agility and exercise tolerance, compared to normal dogs. Affected dogs often lose muscle mass. This may make the bones along the dog’s spine, ribs, and skull appear more prominent than in a normal dog.

"The first signs of muscular dystrophy are a stiff gait or a dog that “bunny hops” awkwardly with his back legs."

Dogs with muscular dystrophy often have abnormally large tongues, making it difficult to eat and drink. They may drool excessively, because it is difficult for them to swallow their saliva.

How is muscular dystrophy diagnosed?

Your veterinarian may suspect muscular dystrophy based on your dog’s clinical appearance. Routine bloodwork is often normal, although some dogs will have elevated levels of a muscle enzyme called creatine kinase (CK). A specialized test called electromyography (EMG) may be performed as well to establish that the signs of weakness are muscular in origin rather than being due to a neurological problem.

Diagnosis of muscular dystrophy requires a muscle biopsy. For this test, your dog will be placed under general anesthesia. Once he is anesthetized, your veterinarian will create an incision in the skin directly over a muscle. Several small samples of muscle tissue will be removed through this incision. The incision will then be sutured closed. Depending on the suture material used, your veterinarian may need to schedule your dog for a follow-up visit for suture removal. In some cases, the veterinarian may use dissolving suture that will break down in the coming weeks.

After surgery, the muscle samples will be sent to a diagnostic laboratory for special processing and evaluation. Examination of the muscle cells under the microscope is typically adequate to diagnose muscular dystrophy, but further specialized testing will be needed to determine the exact type of muscular dystrophy that is present.

Is there a genetic test available for muscular dystrophy?

"There are genetic tests available that screen for muscular dystrophy."

If my dog is diagnosed with muscular dystrophy, what can be done?

There is no treatment for muscular dystrophy. A number of experimental therapies have been studied, including stem cell injections and gene therapy, but these therapies have not been approved for clinical use. Steroids may slow the progression of the disease, but the disease remains fatal in most cases. As the muscles deteriorate, dogs have increased difficulty meeting their nutritional needs and experience reduced heart function.

"There is no treatment for muscular dystrophy."