Punishment is the application of a stimulus that decreases the chance that a behavior will be repeated. It must be timed to coincide with the undesirable behavior, and must be unpleasant enough to deter the dog from repeating the behavior. Keep in mind that you are punishing the behavior not the dog. Punishment can be an effective means of reducing undesirable behavior if the dog immediately and consistently stops when punished and if the behavior is reduced to the point that it eventually is not repeated. However, punishment should not be used during training since it is intended to make outcomes unpleasant and can lead to fear and avoidance. In addition, punishment should never be considered unless the pet first has the means to satisfy its nature and its needs. For example, the chewing dog should be provided with appropriate exercise and appealing toys to chew on before any attempts to punish undesirable chewing are initiated. If however, we can train our pets to do what they are supposed to do and provide outlets for their needs, then it will seldom be necessary to punish inappropriate behavior. 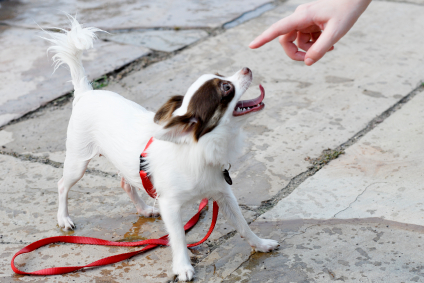 How can punishment be used to correct behavior problems?

The key to successful punishment is to associate an unpleasant consequence with undesirable behavior. Punishment must take place while the behavior is occurring, so that the pet learns what behavior leads to an unpleasant outcome and eventually learns to cease the behavior or avoid the situation.

Physical or direct interactive punishment should be avoided since the pet may become fearful of the owner or of being around the owner in particular situations. The pet justifiably might become defensive when punished, leading to aggressive responses. Furthermore, even if the behavior ceases when the owner is watching, it might continue in the owner’s absence. In particular, whenever the hand is used as a punishment, whether hitting, pinning or grabbing the collar, this could lead to fear of the hand. This is an unacceptable consequence, since the hand should always be associated with something positive and never with anything negative.

The use of punishment products may be more appropriate and more effective, since they are less likely to be associated with the owner, and are more specific and immediate than an owner’s voice or physical handling.

Many of these devices actually serve to interrupt or disrupt the inappropriate behavior, so that the dog can be directed to perform an appropriate behavior, and as such may not be a true form of punishment. For example, the dog that is barking could be interrupted with an air horn or shaker can and immediately taught to approach the owners to play with a favored toy. On the other hand, if the pet is frightened of repeating a behavior because the environment is set up (booby-trapped) to deter the pet, then the owner does not even need to be present to stop the behavior.

"Many of these devices actually serve to
interrupt or disrupt the inappropriate behavior."

Punishment should never be used to train a pet. Pets should be taught what we want them to learn through reinforcement and shaping rather than attempting to train them what we don’t want them to do. It is illogical to wait until the pet misbehaves and then administer something unpleasant. Punishing the pet can lead to fear of the owner, fear of handling or fear of particular stimuli (approach, reaching out, pulling leash) and the real possibility of aggression. If punishment is effective it can at best stop the behavior from recurring in that location, but will not stop the behavior (e.g., chewing, elimination) from being repeated at other times or locations. With owner-initiated punishment, the pet may soon learn to inhibit the behavior in the owner’s presence (and continue the behavior in the owner’s absence). On the other hand, when punishment is not sufficiently unpleasant, it may serve as a reward (attention). If the pet continues the behavior after two or three applications of the punishment, then it is ineffective and should be discontinued.

Punishing the pet while the owner remains out of sight is a better way of teaching the pet to avoid the behavior altogether, whether the owner is present or not. This is known as remote punishment (punishment administered by the owner while remaining out of sight) and takes a great deal of preparation, time and forethought. Perhaps the only practical application of punishment is to booby-trap the area (sometimes known as environmental punishment), so that the dog is punished even in the owner’s absence.

What is direct interactive punishment, and how does it work?

If you catch your dog or cat engaging in an incorrect behavior, try a loud noise such as clapping your hands or a loud “no”. Remember, reprimands need to occur while the behavior is happening, preferably just as it begins, and never after. Often pets will be startled when they hear these noises and temporarily stop the behavior. One such device is a “shaker can.” This is an empty soda can that has a few pennies inside and then is taped shut. When given a vigorous shake it makes a loud noise that will often interrupt the puppy’s behavior. Other devices that make a loud noise are ultrasonic trainers, battery operated alarms, and air horns. However, caution should be used when exposing the pet to noises or other forms of punishment that may startle, since some pets might become excessively aroused and may redirect their aggression to a person or other pet in the home. Physical handling as a form of punishment should be avoided.

For remote techniques to be successful there are two key elements. First, the owner must be able to monitor the dog to determine when the undesirable behavior begins and must be able to administer the “punishment” while remaining out of sight. A long range water rifle, a remote citronella collar or a long leash left attached to the dog’s head halter often work best. To know when the problem begins you will need to watch your dog closely while remaining out of sight (from around a corner, or perhaps through a window if the dog is outdoors). A one-way mirror, intercom, or motion detector might also be practical methods of remotely monitoring behavior. Second, as soon as the dog enters the area or begins to perform the undesirable behavior, the remote punishment device can be activated. If your dog finds the noise or spray unpleasant and cannot determine where it is coming from it should quickly learn to stay away from the area whether the owner is present or not.

How can I booby trap the environment to punish my pet?

Punishing the behavior remotely, with the owner out of sight, is impractical if the owner is away from home or unavailable to supervise. Booby traps are a way of teaching the pet to avoid the area, or the behavior itself. Some innovative ways to discourage a dog from entering an area where an undesirable behavior is likely to be performed (garbage raiding, chewing, entering rooms) would be to make the area less appealing by placing balloons set to pop, a pyramid of empty cans set to topple, or a bucket of water set to dump as the pet enters the area. Motion activated alarms and spray devices, double sided tape, a plastic or vinyl carpet runner with the nubs up, unpleasant odors and perhaps an indoor remote spray collar deterrent, may be effective at keeping pets away from problems areas.

"To be effective, the first exposure to a product
must be as repulsive as is humanely possible, so
that the dog is immediately repelled whenever it smells
or tastes that product again."

Taste deterrents might also be helpful for destructive chewing, provided they are unpleasant enough to deter the behavior. Products such as bitter apple, bitter lime or Tabasco sauce are often recommended, but many dogs do not mind, or learn to enjoy the taste. A little water mixed with cayenne pepper, oil of eucalyptus, any nontoxic mentholated product, or one of the commercial anti-chew sprays often work better. To be effective, the first exposure to a product must be as repulsive as is humanely possible, so that the dog is immediately repelled whenever it smells or tastes that product again. Never leave any objects or areas untreated until the dog learns to leave the object or area alone. Punishment alone will not work unless the need and desire to chew is filled by appropriate toys and objects.

What is negative punishment, and how does it work?

All of the punishment techniques discussed above are forms of positive punishment, in which the application of an unpleasant stimulus decreases the chance that the pet will repeat the behavior. Another form of punishment occurs when a reward is removed as a consequence for a behavior. In other words, the removal of something pleasant is punishing the pet because it is learning that good things are taken away if the behavior is repeated. For example, if the puppy is playing and this escalates to play biting and you stop the game and walk away, this is known as negative punishment.

What should I do if I find a problem after it has already occurred?

If you find something that your pet has done (destruction, elimination), but you did not catch him in the act, just clean it up and vow to supervise your puppy better in the future. Do not get your pet and bring him over to the mess, then yell and physically discipline him. Remember that you need to punish the behavior you wish to change. If you did not see your pet chew up the object or eliminate in the area, all you are doing is disciplining your pet for being present at a mess on the floor. Because that makes no sense to your pet, your reprimands could create fear and anxiety, which could lead to aggression and owner avoidance.

If I must not punish my pet after the problem has occurred, what can be done?

There is no point in punishing undesirable behavior once it has ceased. Other than designing appropriate environmental booby-traps, the only thing that you can do to avoid undesirable behavior is to supervise your pet when you are around, and to prevent access to potential problems when you are not available to supervise. Keeping a leash attached to a head halter for dogs, or a leash attached to a body harness for cats, will allow you to maintain good supervision and interrupt problems immediately when you are around and supervising. Remember that problems such as chewing and other forms of destructiveness may be part of normal exploratory play. Always provide suitable play objects designed to entertain your pet so that he will not want to destroy your possessions. For more information, see the American Veterinary Society of Animal Behavior punishment guidelines at avsabonline.org.