What is redirected aggression? 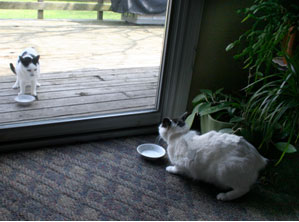 Redirected aggression occurs when a cat is aroused by another animal, person or event, but is unable to direct aggression toward the stimulus. For example, your cat is sitting on a windowsill and sees another cat out on the property. Your cat becomes very agitated, begins to focus on the other cat and shows aggressive body postures, hisses, or growls. If a person or animal in the home were to walk into the room, they may be the recipients of an aggressive attack. When this happens between resident cats, sometimes they will no longer tolerate being together and will fight whenever they see each other. The initial stimulus that arouses the cat is most frequently another cat, but it could be any sight, sound, or a source of discomfort that leads to a heightened level of anxiety or arousal.

What should I do if that happens?

"First and foremost, you must avoid the cat until it calms down."

First and foremost you must avoid the cat until it calms down. If the aggression is being redirected toward a second cat in the household, the two cats may have to be separated. In some cats, separation to another room with water and litter may only be required for a few minutes, but it is not unusual for it to take hours, or in some cases days, until the cat is calm enough to be reintroduced safely to the other cat. In some cases, regardless of the length of confinement, the cat remains aggressive to the other cat after it is released. This is most likely if the redirected aggression was met with retaliation, punishment or another fearful event (perhaps in an effort to separate the cat from the victim). In addition, if the attack leads to a change in relationship between the cat and the victim (fear, defensiveness) then the aggression may persist.

The best way to calm an agitated cat is to put the cat in a darkened room and leave it there. If the cat does not retreat into a room where it can be confined, or cannot be moved safely into the room, then a large blanket, thick gardening gloves, or a large piece of wood or cardboard should be used to protect yourself while maneuvering the cat into the room. Alternately throw a large blanket or comforter over the cat, wrap it around the cat and quickly deposit the cat in the room, blanket and all. If the problem is recurrent, you should work to devise a safe method to enable quick and effective future confinement. While the best solution would be reward training so that the pet immediately comes to its room on verbal cue or perhaps a shake can of treats. Other options would be to leave a leash and harness attached at times when problems might arise, or to use a citronella spray, water spray, or noise deterrent device to chase the cat to its room.

"The biggest mistake that owners make in trying to resolve this problem is to try and bring the cats together too soon."

Once confined, the cat may need to be kept in the room anywhere from several minutes to several days. You can go in, turn on the light, offer food or a favored treat, and if the cat remains fearful or does not accept the food, turn out the lights and leave. If the cat continues to remain aroused for a couple of days, make certain that there is a minimum of food, litter, and water in the room, and offer favored treats or play toys each time you open the door. Be certain to read the cat’s actions and attitude to determine if it is calm enough to be released. If aggression has been directed toward a second cat in the home, it is very important to wait until the cats are calm before reintroducing them. The biggest mistake that owners make in trying to resolve this problem is to try and bring the cats together too soon. The use of pheromones in a spray or diffuser (Feliway®) may help calm very agitated cats. 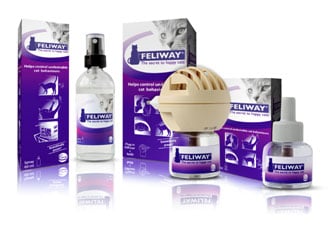 How should I get my cats back together again?

Reintroductions are best done slowly. Food rewards should be used to facilitate calm, nonanxious behavior. The cats need to be far enough apart (10 to 20 feet) so that they are relaxed and will take food or a treat while in the presence of the other cat. For safety and control, it is often advisable that the cats have harnesses and leashes on them. If the cats will not eat, then they are too anxious and probably too close together, and should be moved apart. In this situation, try moving the dishes further apart. If the cats still will not eat, separate them until the next feeding. If the cats eat at that time, allow them to remain together while they eat, and then separate them. Repeat at the same distance for the next feeding. If things go well the next time, the dishes can be moved slightly closer together. If the cats are comfortable, you can leave them together to let them groom, and then separate them.

This is a slow process; you cannot rush things. Allowing the cats to interact in an aggressive manner sets the program back. The cats are separated except when they are distracted, occupied, and engaged in an enjoyable act (feeding or playing). The goal is to make sure that good things are associated with the presence of the other cat. It may be helpful to switch litter pans between the cats. Another technique is to rub the cats with towels and switch the towels from one to the other, mixing their scents.

If the aggression has not been severe, it may be possible to get the cats reacclimated to one another through play. The best toy is a rod-type handle with a catnip mouse or feathers on the end for chasing and pouncing. With each cat on either side of a slightly open door introduce the toy and see if they will play with each other.

Another possible way to reintroduce cats is with the use of a crate. Place one cat in the crate while the other cat is loose in the room, usually starting with the victim loose so that it can find a comfortable distance and feel secure. This might best be done at feeding or play times. Allow the cats to become comfortable in the presence of one another. Then, the next time, switch occupants of the crate for the session, unless the occupant of the crate is too frightened. An alternate method is to use a screen door on a room to separate the cats but allow them to visualize each other and get used to the sight of one another. Feeding the cats on either side of the door can also be used to facilitate the process. The use of pheromones in a spray or diffuser may help calm very agitated cats.

If the problem is severe, one or both of the cats may need to be medicated. This is a step that needs to be discussed with your veterinarian and all the risks and benefits explored.

Can redirected aggression be directed toward people?

"Resolving the aggression requires that the source of the arousal, agitation, or aggression be identified."

Yes. Aggression can also be redirected toward people when a cat that is highly aroused by a stimulus is approached or disturbed by a person. Avoidance of the aggression-producing situation is necessary. Situations include the sight or sound of intruder cats on the property, especially in the spring and fall, new people or pets in the household, the sight or sound of prey, loud or unusual noises, and a variety of other new or novel stimuli that are sometimes difficult to identify. If the problem arises, the owners must avoid the cat until it is calmed down. As with redirected aggression to other cats, the immediate treatment is to avoid the cat, preferably by finding a safe way to confine the cat in an area away from people, and then releasing the cat only after it is calm. Again this can take a few minutes to a few days and each time you open the door to check on the cat, you must determine if it is calm and safe to release. Offering food, treats, or a play toy can help to determine whether the cat is sufficiently settled.

How can redirected aggression be treated?

Resolving the aggression requires that the source of the arousal, agitation or aggression be identified. Although desensitization and counter-conditioning would be the best way to resolve the anxiety associated with the stimulus, this is seldom practical except perhaps for noises (which might be presented at varying gradients of intensity) or when the arousal is due to other cats or people in the home (see Introduction to Desensitization and Counter-Conditioning, Overcoming Fears with Desensitization and Counter-Conditioning). It might also be possible to teach the cat to settle and take food rewards in the areas where it gets aroused by stimuli such as other cats (e.g., on the windowsill). Avoiding exposure to the arousing stimuli is, at least from the outset, the safest and most practical means of preventing further aggression.

This might be achieved by confining your cat away from the doors and windows, where the stimulus might be seen, heard, or smelled. Keep it out of the room (this may only be necessary at times when the stimuli, such as other cats, are livkely to be around) or use booby-traps such as motion detectors to keep your cat away from the doors and windows. Installing vertical blinds or shutters, or placing sticky tape or upside down carpet runners along the windowsills or in front of the doorway may be sufficient. Alternately remove the stimulus or keep an intruder off the property by using repellents or outdoor booby-traps such as ultrasonic devices or motion detector alarms or sprinklers. Keeping garbage locked up and removing bird feeders can reduce the chances that animals will enter your property and disturb your cat. Drug therapy may also be useful in some cases to prevent excessive arousal.