My dog was suddenly unable to turn her head to the side. She was diagnosed with a bulging intervertebral disc in her neck. What does this mean? 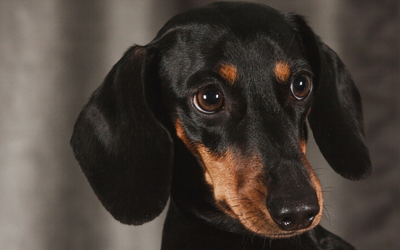 If the disc degenerates or is damaged in some way, the disc may bulge (like a jelly-filled donut) and put pressure on the spinal cord and/or the roots of the spinal nerves that come off the sides of the spinal cord. This pressure can cause symptoms ranging from severe pain to weakness to paralysis.

Is there any genetic or breed predisposition for cervical intervertebral disc disease?

There are several breeds that seem to experience a higher frequency of the condition, but it is unknown whether it is inherited genetically. Dog breeds with long backs, and shortened and bowed legs, like the Pekingese and Dachshund, have faster disc deterioration than other breeds.

Hansen type I disc disease is most common in the breeds with long backs and short legs. It occurs most commonly in younger dogs, 3-6 years of age. The most commonly affected breeds are Dachshunds, Beagles, and Poodles.

In contrast, Hansen type II disc disease is most common in large-breed dogs like Doberman Pinschers. These dogs tend to be a bit older, ranging in age from 8-10 years of age.

Are the signs of cervical disc disease always as sudden as what happened to my dog? Are the signs always the same?

The severity of a dog’s clinical signs depends upon several factors, including the rate and volume of disc protrusion or extrusion, the pressure on the spinal cord and/or nerve roots, and the violence of the disc material extrusion.

The most common signs include:

Examination will reveal neck pain with both flexion and extension of the neck, turning the neck from side to side, or by deep palpation of the cervical muscles. Over time, there will be a loss of muscle mass over the shoulders. There may be front leg lameness such as knuckling or weakness as a result of pressure on the nerve roots.

A more severe disc disease scenario involves partial paralysis in both front and/or rear legs. The nervous system symptoms may be confined to only one side of the body involving the front leg and rear leg on that side.

Aside from the breed predispositions for the two types of disc disease, are there other risk factors for bulging or ruptured intervertebral discs?

Both obesity and repeated traumatic events in the predisposed breeds may enhance the risk of disc disease.

I was told that cervical intervertebral disc disease may be treated either conservatively or with surgery. How is the decision made between these approaches?

Conservative management with pain relievers and anti-inflammatory medication is recommended with a gradual onset of clinical signs or when clinical signs are limited to pain and/or a mildly wobbly gait. Surgery is recommended when there are repeated episodes of neck pain, when neck pain is severe, when there are severe nervous system deficits, or when the dog has not responded to conservative treatment. It is important to monitor a dog’s ability to urinate and defecate normally.

With or without surgery, physiotherapy is a critical part of healing and recovery. Physiotherapy may include acupuncture, therapeutic laser, passive range of motion to prevent loss of muscle mass, massage, and hydrotherapy.

What happens after treatment? 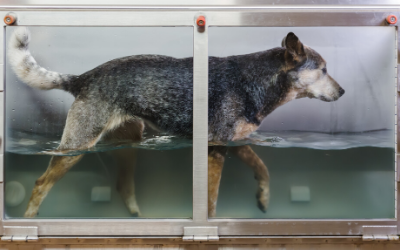 All affected dogs should be fitted with a harness instead of a neck collar, and they should have their activity limited, at least early in the recovery period. Strict rest is required in the first 3-6 weeks following a disc protrusion or rupture, with or without surgery. Your veterinarian will help to prescribe increasing levels of activity as healing progresses.

If surgery is needed, the goal is to remove disc material from the space surrounding the spinal cord. This surgery usually provides immediate pain relief and long-term restoration of nervous system function. The surgical approach is typically through the bottom side of the neck, gently moving the tissues of the neck aside to provide access to the spine.

Initially, veterinary rechecks will be frequent until clinical signs are resolved. Getting the dog to a healthy weight if needed and keeping him there, will help him recover more quickly and maintain an active lifestyle. Unfortunately, there is no way to prevent intervertebral disc disease.

"For most patients, the long-term outlook is favorable."

Long-term complications are uncommon, but may include persistent neck pain or a deterioration in standing and/or walking. For most patients, the long-term outlook is favorable. Dogs with chronic disc disease or with multiple disc involvement, are likely to have a recurrence of clinical signs. Dogs with cervical disc disease should always be walked using a harness rather than with a leash attached to a collar.