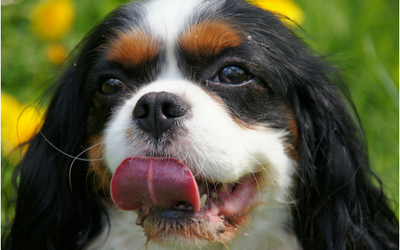 My Cavalier King Charles Spaniel began scratching the back of his head incessantly. I thought he might have an ear infection. I took him to his veterinarian and showed her a video of what the scratching looked like at home, and she said my dog actually has a condition called syringomyelia. This sounds like a terrible disease, and I am trying to better understand what to expect.

Syringomyelia is the term that describes fluid-filled cavities that develop within the spinal cord causing abnormal sensation in affected dogs. The underlying issue is called chiari-like malformation (CLM). CLM describes a mismatch between the size of the brain, which is too big, and the space within the skull, which is too small. This leads to crowding of the back part of the brain and the brainstem, and subsequent obstruction of the flow of the cerebrospinal fluid that bathes the brain and spinal cord. The most common sign is altered sensation typically at the back of the head and the neck which may progress to pain.

Is this a disease specific to the Cavalier King Charles Spaniel?

There are actually several breeds in addition to the Cavalier King Charles Spaniel that have been identified with CLM including:

My dog’s sign of this condition was excessive scratching. What other signs are associated with CLM?

Dogs that develop CLM and subsequent syringomyelia will often develop withdrawn behavior. This may reflect a change in their mental activity or simple anticipation of pain upon being handled. They may begin to cry out when jumping or running, when defecating (due to the increased pressure inside the skull with the abdominal press to pass stool), or when they are picked up. They may exhibit intermittent pain, particularly at night. They may also seem sensitive when touched near the shoulder, ear, the back of the neck, or the breastbone. Some dogs with CLM will try to scratch at themselves while they are walking, often without any obvious stimulus. Scratching or pain may result from touch, movement, excitement, or wearing a collar. Finally, these dogs may rub their faces incessantly.

Are there specific diagnostic tests for CLM and syringomyelia?

Now that magnetic resonance imaging (MRI) is readily available, the deformity associated with CLM may be demonstrated. MRI may help to predict the expected severity of clinical signs. Radiographs (X-rays) are generally not very useful for diagnosing CLM.

How is CLM and syringomyelia treated?

The main focus of treatment for CLM and subsequent syringomyelia is pain relief. There are several medical options available, but most patients benefit from medication that targets the nervous system and nerve-associated pain (e.g., gabapentin). Medical acupuncture may be an effective adjunctive treatment.

There is a surgical procedure that can decompress the rear of the skull of severely affected dogs, but surgery has a very high failure rate. About half of the dogs treated surgically will decline by 2 – 2½ years post-op.

Dogs with CLM and syringomyelia should have the efficacy of their pain management assessed regularly (every 1- 3 months) as their symptoms may progress over time. There is no need to restrict their activity, but removing the collar may help prevent symptoms. Raising the food and water dishes to elbow height helps to keep the neck in a neutral position. It is impossible to predict the progression of this disorder. Some dogs remain stable for years while others become completely debilitated within months of their first symptoms.

Response to therapy will provide insight into how a specific individual will be able to accommodate CLM and syringomyelia.