The Pros and Cons of Invisible Fences for Dogs

Robert Frost is credited with saying, "Good fences make good neighbors." How does this sentiment relate to neighbors with dogs? 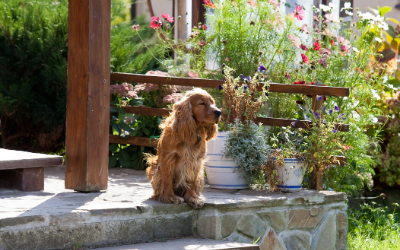 For people who are afraid of dogs, don't like their lawns dotted with feces, and dislike muddy paw prints on the patio, the relationship is clear - if a dog owner keeps his dog in his own yard, he's a good neighbor. But being neighborly isn't the only reason for fencing in dogs.

Why would I confine a dog?

Fencing prevents a dog from becoming a neighborhood nuisance, but there are other issues at hand. Keeping a dog appropriately confined keeps him safe by preventing mishaps associated with free roaming. Fenced-in dogs are less likely to be hit by vehicles, have fewer aggressive interactions with other dogs, have decreased exposure to contagious diseases, and are less available to pet thieves.

Should I get an invisible fence?

With safety in mind, dog owners may consider traditional or electronic fences. Here are advantages and disadvantages to popular invisible fences.

Reasonable cost. Although there are less expensive versions of traditional fences, neighborhood codes often specify the types of construction materials that are allowed. Some fencing materials are expensive (wood, iron) and labor is an added cost. Invisible electric fences are often less costly even when professionally installed.

Aesthetics. Invisible fences are, well, invisible. These barriers do not visually interfere with scenic views or green spaces and enhance the feeling of being outdoors. People can move around the yard freely without the hassle of opening and closing gates. The inconvenience of outlining flags is temporary. Once the dog learns the boundaries of the electric fence, the flags can be removed.

Reliability. Dogs with a tendency to climb over, dig under, or chew through fences may be better contained with an electric fence.

Protection. Intruders may be deterred by the presence of a dog in the yard since they aren’t likely to realize that the dog may not actually be able to reach them.

Training required. To ensure success, the dog must learn where the fence is. This requires a training period where the owner and dog walk the perimeter of the fence noting the flags. Fencing companies usually provide training protocols and spend time working with owners and their dogs.

Lack of protection. Although invisible fences protect dogs by preventing them from leaving the yard, they do not prevent hazards from entering the yard. Stray dogs and wild animals can still access the yard and interact aggressively with pet dogs.

Barrier frustration. Some dogs become agitated when they watch neighborhood dogs freely romp about and realize that they cannot join in. This is especially frustrating if neighboring dogs “tease” or play just out of range. Friendly, sociable dogs also become frustrated when they see another dog or human approach but cannot greet them.

Degree of discomfort. Most electric fences include an audible warning prior to the electric impulse and dogs learn quickly to respect the “beep” to avoid the shock. When a dog ignores the audible signal, an electric stimulus is discharged which startles the dog but is not painful if the apparatus is set appropriately.

Reliability. If the power supply is interrupted by a cut wire or dead battery in the collar, escape is still a possibility. Fortunately, most dogs remember their initial training and respect the perimeter even when the fence is not electrified.

Escape. If the dog sees something he really wants to chase or is frightened by thunder or something inside the yard, he may breach the electric fence ignoring the electric stimulus. But what happens when the dog wants to go back inside his yard? Some fences may “shock” a dog upon re-entry while others have the capability to only emit an electrical impulse upon exiting the yard and there is no “beep” or “shock” upon returning home.

Like all decisions regarding pets, the choice of fencing is one that takes research and careful consideration. But with the safety and wellbeing of your dog at stake, the time you spend will be justified in the end. Good fences don’t just “make good neighbors,” they make happy dogs, too.