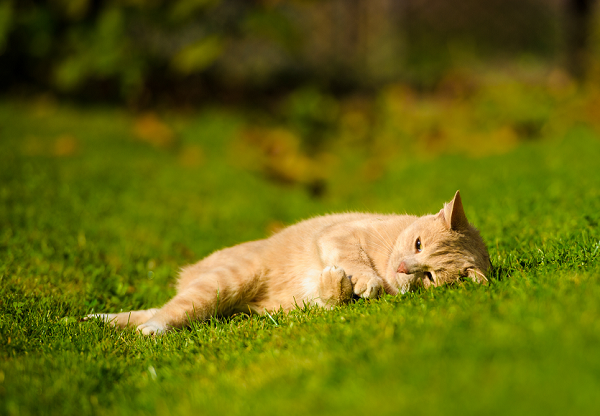 I've heard about anthrax in people. Should I be concerned for my cat?

Anthrax is a bacterial infection caused by Bacillus anthracis. This type of bacterium can develop small spherical bodies (spores) within the bacterial cell. These spores, each of which can develop into a new anthrax bacterial cell, are much more capable of surviving in the environment than the more fragile parent cell. Additionally, these spores are more resistant to disinfectants. Spores may survive in the environment for many years; some reports found spores that survive for up to 40 years under certain conditions. It takes a large number of spores to cause an infection that results in clinical signs of anthrax.

"It takes a large number of spores to cause an infection that results in clinical signs of anthrax."

Is anthrax a new disease?

No, anthrax has been described in the medical and veterinary literature for hundreds of years. It occurs in all parts of the world as a sporadic disease in farm animals and occasionally in wild animals. What is new is the potential to alter the bacterium for use as a terrorist threat.

How is anthrax spread?

Anthrax is not normally contagious from animal to animal. Most livestock infections occur by inhalation or ingestion of spores from pasture that has been contaminated by a decomposing infected carcass. In predators, such as cats, ingestion of infected meat is the usual route of infection. In people, it has typically been diagnosed in farm workers, veterinarians, and slaughterhouse personnel who have handled infected carcasses. Even then, it usually takes a high dose of spores to cause more than a local skin infection. In the past, sheep fleeces were a common source of anthrax spores, and anthrax in those workers was called 'wool-sorters disease'.

What are the clinical signs of anthrax?

Anthrax can cause different types of disease. The most common type in people is the dermatological (skin) form that occurs in people that come into contact with the anthrax organism or its spores. It causes local inflammation and the formation of black pustules on the skin. An intestinal form, that occurs when large numbers of organisms are ingested, leads to inflammation of the intestinal lining and causes bloody diarrhea. A pneumonic form develops when large numbers of anthrax spores are inhaled into the lungs, causing pneumonia and respiratory problems. The infection can have a generalized form, affecting most or all body systems, including the brain.

"The throat may be swollen and there may be visible swelling of the neck extending to the face and head."

The rare cases reported in pet animals have usually been the intestinal form of anthrax, caused by eating infected meat. With this form, there is acute gastroenteritis with vomiting and diarrhea. The throat may be swollen and there may be visible swelling of the neck extending to the face and head. The tongue and lips may also be affected. Diagnosis is made by culturing the anthrax organism.

How is anthrax treated?

The anthrax bacterium is susceptible to many antibiotics including penicillin, doxycycline (Vibramycin®), and enrofloxacin (Baytril®). Treatment is highly effective in the early stages of infection.

Can my cat be vaccinated against anthrax?

Currently, there is no commercial anthrax vaccine licensed for use in cats, although vaccines of varying effectiveness have been produced for livestock.