How are drugs used for behavior modification in pets? 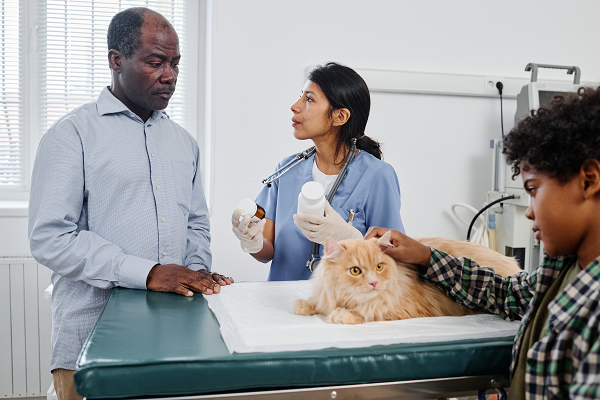 A number of drugs are now being utilized to treat pet behavior problems. To determine if drug therapy might be a consideration, it is first essential to determine the diagnosis or cause for the behavior. Drugs may be indicated when behavior techniques alone are unlikely to improve the problem or if your pet has not responded sufficiently to behavior training. If your pet is excessively anxious or is at risk of being injured or injuring another pet or a person, drugs may be indicated for humane reasons. Some types of behavioral illness may relate to abnormalities in brain chemistry; drugs may be used to help achieve more normal brain function.

If it is determined that medication could improve the outcome, behavior management, as well as behavior modification, are almost always needed to treat the problem. Conversely, some pets may not make sufficient progress in a behavior modification program until their anxiety, frustration, or arousal has been reduced with medication.

There was a time when most of the medications used to treat behavior problems did cause sedation. That is no longer the case. Most medications used today have been designed to target problematic behaviors with fewer unwanted side effects. If your pet should experience sedation with a particular medication, an alternative may be available.

Are any tests required prior to drug use?

"Before drugs are considered, your pet should have a full assessment, including a physical examination and diagnostic tests..."

Before drugs are considered, your pet should have a full assessment, including a physical examination and diagnostic tests, to rule out medical problems that might be contributing to the behavior problem and to ensure that there are no contraindications for drug therapy. Baseline tests include a serum chemistry profile, urinalysis, and complete blood count (CBC). Additional testing, such as a thyroid profile or an electrocardiogram (ECG), may be recommended for certain medications.

What are the side effects and contraindications?

Before prescribing, your veterinarian will discuss common side effects as well as contraindications, such as those related to drug interactions. If your pet does experience an undesirable side effect while taking a specific medication, let your veterinarian know so that an alternative drug can be substituted.

Most medications used to treat behavioral illnesses were designed to be used in humans and few have undergone the extensive process needed to license use in animals. Dosages have been extrapolated so that these drugs can be safely used in pets.

How do antidepressants help?

Antidepressants work by causing changes in brain chemicals called neurotransmitters. Serotonin and norepinephrine are the two neurotransmitters targeted by most of the drugs in this category. Antidepressants help with many behavioral illnesses besides depression, such as anxiety, panic, impulsivity, and sleep disorders. In veterinary medicine, antidepressants have been used to treat many conditions including urine spraying in cats, urinary incontinence, separation-related distress, thunderstorm phobia, and some forms of aggression.

"Antidepressants help with many behavioral illnesses besides depression, such as anxiety, panic, impulsivity, and sleep disorders."

With the exception of trazodone (see explanation below), most antidepressants are needed on a long-term basis. They require several weeks to reach full effect and are not typically useful on an as-needed basis. After long-term use, they should be withdrawn slowly.

Are any antidepressants officially approved for use in animals?

Fluoxetine is in a class of drugs known as selective serotonin reuptake inhibitors (SSRIs). SSRIs typically have a calming effect but seldom cause sedation. Other side effects may include decreased appetite, weight loss, gastrointestinal upset, or restlessness.

Clomipramine is in a class of drugs known as tricyclic antidepressants (TCIs). Because clomipramine has a greater influence on serotonin than other TCIs, it is often more effective for treating moderate to severe behavioral conditions in dogs and cats.

What other antidepressants are used?

There are many other medications that are used to treat depression in humans and are referred to as antidepressants. The labels can be confusing, as most of these drugs are used to treat a wide range of behavioral conditions in people and are similarly very helpful for treating pets. Here are some examples:

Amitriptyline, like clomipramine, is a TCI. It is not specifically licensed for use in pets. It is mainly effective due to its mild influence on serotonin. Because amitriptyline can also affect other chemicals in the body, it can be associated with more side effects than clomipramine and SSRIs. Sometimes, these side effects can be advantageous. For instance, amitriptyline has antihistaminic properties that can help pets with allergies and it has analgesic properties that can benefit patients with chronic pain. Some less desirable side effects are less common; some pets may experience a dry mouth, urine retention, sedation, or constipation, especially during the first few days of therapy. Amitriptyline should be avoided or used cautiously in patients with glaucoma, seizures, or heart disease.

Trazodone is an antidepressant that is in the class of serotonin antagonist and reuptake inhibitor (SARI). Trazodone begins to work quickly and is often used for short-term treatment to give the primary medication (usually an SSRI or TCA) time to take effect. Trazodone can sometimes be helpful long-term as an adjunctive or add-on therapy with other antidepressants. There is some risk of drug interactions, especially the potential for serotonin overdose, which is known as serotonin syndrome. It is essential that you check with your veterinarian before combining trazodone with any medication and report any unusual side effects immediately.

Since trazodone works quickly, it can also be useful when exposure to a trigger for fear or arousal is anticipated. For instance, a pet with thunderstorm phobia can take trazodone before a storm.

Buspirone is an antidepressant in the azaperone family. It has few side effects and is sometimes used for the treatment of generalized anxiety. It may be useful for cats that experience distress related to interactions with other cats in the home. Increased aggression is a reported side effect in cats so buspirone is not usually recommended if a cat is already exhibiting aggressive behavior. Buspirone may take several weeks to take effect and is not useful for temporary situational anxieties.

Venlafaxine is in a drug category called serotonin-norepinephrine reuptake inhibitors (SNRI). This category of antidepressants affects both serotonin and norepinephrine and is most often used when an SSRI has been only partially effective. Because of their greater effect on norepinephrine, SNRIs are used to reduce arousal and frustration.

What other medications are used to reduce anxiety?

Benzodiazepines are very effective at reducing anxiety and panic. Examples of benzodiazepines are alprazolam, lorazepam, and diazepam. Because of their short onset of action and relatively short duration, these drugs are primarily used for specific anxiety-inducing situations, such as a thunderstorm, fireworks, or a car trip.

Benzodiazepines may cause sedation and appetite stimulation and some pets might even become more agitated or anxious when therapy is first initiated. These effects usually resolve within a few days. Benzodiazepines should be tapered gradually after long-term daily use.

Caution: diazepam should NOT be used in cats, as there have been reported cases of liver damage. Report any unexpected behavior or medical changes, such as decreased appetite or vomiting, to your veterinarian immediately.

Clonidine works on the sympathetic nervous system (alpha 2 agonists). In humans, it is licensed for the treatment of hypertension (high blood pressure) but it also has anti-anxiety effects. One way that it can reduce anxiety is by blocking norepinephrine. Clonidine can begin to work quickly, which makes it useful when an anxiety-evoking situation is expected. It is also used to reduce daily anxiety, most often in conjunction with an SSRI. Clonidine might be prescribed to help with conditions such as storm phobia, separation-related distress, or hyperarousal on walks. Clonidine must be tapered gradually after long-term daily use.

Gabapentin is an antiseizure medication that can also relieve anxiety and pain. Gabapentin works quickly and can be used in situations that trigger anxiety, such as a visit to the veterinary office, a car trip, or a thunderstorm. It can also be used chronically, usually in combination with an SSRI, for pets experiencing daily anxiety. Gabapentin may cause sedation in some pets, especially at higher doses or when used only occasionally for certain situations.

Are there medications for other behavioral conditions?

Methylphenidate is a stimulant used for attention deficit disorders in people. Although rare, some dogs that have short attention spans, are difficult to train, display repetitive behaviors, or are extremely active and have difficulty settling down, may have attention deficit disorders. Stimulants generally cause an increase in heart rate and activity level but have the opposite effect in hyperactive dogs: the heart rate slows and activity is reduced.

"Stimulants generally cause an increase in heart rate and activity level but have the opposite effect in hyperactive dogs..."

Selegiline (Anipryl®) is a monoamine oxidase B (MAO-B) inhibitor. It is licensed for use in dogs in both Canada and the United States for the treatment of cognitive dysfunction syndrome (CDS) as well as in the control of clinical signs of Cushing’s disease. Signs of CDS can include disorientation, change in social interactions, altered sleep-wake cycles, house soiling, and anxiety. Selegiline affects mainly the neurotransmitters called dopamine and norepinephrine, which may decline with age. It may also help protect brain cells.

Selegiline should not be used with any other medications that affect serotonin, including most antidepressants (SSRIs, SNRIs, TCIs, trazodone, buspirone).

It is important to tell your veterinarian about all your pet’s medications, as there are many contraindications with other behavioral drugs. Serious interactions can occur even with topical products such as amitraz (used to treat ticks and mites in dogs)

How do I know if medication is helping?

Keep a journal of your pet’s response to each medication, as there is often a need to adjust the dosage or even the combination of medications being used. The goal is always to improve the behavior without causing undesirable side effects.