Aggression is defined as threats or harmful actions directed toward another individual and can include threat displays, lunging, growling, snarling, snapping, and biting.

"In animals, aggressive behaviors are a means of communication."

In animals, aggressive behaviors are a means of communication. Dogs and cats use aggressive displays, threats and attacks to resolve competitive disputes over resources (territory, food) or to increase their reproductive potential, or to escape threatening situations. "Aggression" describes the behavior, but does not give any information about underlying motives or causes. Aggression can have multiple motivations.

How is aggression classified? 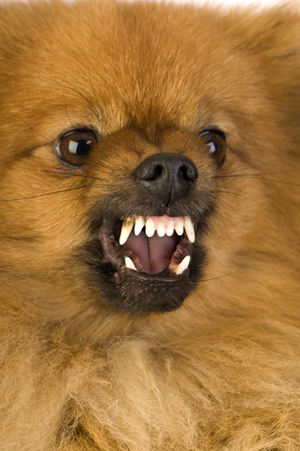 Aggression can be subdivided into type based on intended victim, body postures during aggression, the pet's health, and other factors such as the resource the animal may want, estrus status of animals involved, and location of the aggressive encounter. When classifying aggression, it is important to consider the factors surrounding the initial aggressive event, since over time the effects of learning (consequences), including the actions of the owner and the stimulus (e.g. how the person or other pet retaliates or retreats), will affect how the aggression is displayed.

"In dogs and cats, the function of the aggression is most commonly used as the basis of classification."

Ethologists, persons who study animal behavior, use the term agonistic to refer to the behavior of animals (usually of the same species) that involves conflict or contest. These encounters can involve fighting, escape, dominant, and submissive gestures and posturing. Aggressive behavior can also be divided into offensive (going after the other individual) and defensive (defending yourself from a perceived threat) aggression.

Note that there is no one single cause of aggression. In addition, an individual pet can display one or more forms of aggression and multiple factors and stimuli may combine to push the dog or cat to a point where aggression is displayed. For example, a dog may exhibit territorial behaviors and be fearful of children. This dog may only exhibit aggression if a strange child comes onto the dog’s property when it is cornered or tied up and cannot escape. If the dog learns that snapping or growling are successful at chasing the child away, the dog may begin to generalize its aggression toward similar stimuli (e.g., other children) and similar situations (unwanted or unsolicited touching such as hugging).

Are aggressive dogs and cats abnormal?

"Aggressive behaviors may be "normal", but when they result in human or animal injury, the behavior is dangerous and unacceptable."

Aggressive behaviors may be “normal,” but when they result in human or animal injury, the behavior is dangerous and unacceptable. Human safety must always be a primary consideration when discussing aggression. It is estimated that from 2 to 5 million human bite wounds occur annually across North America. Most people are bitten by animals they own or that are familiar to them. Children are more likely to be bitten by a dog they know than a stray, unfamiliar dog.

Some aggression in dogs and cats may have abnormal components to it, especially when the pet is excessively anxious or unable to control the initiation, termination, or intensity of its response. These problems may arise from genetics, lack of sufficient socialization, insufficient maternal care, or exposure to excessively fearful events, particularly during early development. Although in some cases, medical health problems and degenerative changes may be present in an aggressive animal, they may or may not contribute to the aggressive behavior.
How do dogs communicate their aggressive behaviors?

It is essential to realize that how a dog would communicate to another dog is the same way they might communicate to a human. By watching the body postures and facial expressions of dogs, it is possible to find an indication of what the dog may do. Commonly, the initial reaction begins with brief eye contact as the animals attempt to determine other subtle body and facial cues to obtain additional indication of where the social interaction is heading. Much canine communication entails "threats" and deference, both of which are designed to diminish outright fighting.

In some cases, the more confident dog may maintain eye contact waiting for the other dog to defer by looking away, usually resulting in the confident dog looking away as well. Prolonged mutual eye contact may be considered a threat by both dogs. Dogs that are acting subordinate by looking away may feel threatened by continued eye contact and movement into their space and may react to defend themselves because they are afraid. A bolder and/or assertive dog can react to continued eye contact and approach by holding the stare and escalating its aggressive threat, especially if this dog has learned from past experience that this strategy is successful. In some dogs, a dark iris, black eyelids, or hair occluding the eyes may make eye contact difficult to ascertain, and this important warning may go unnoticed (see Canine Communication – Interpreting Dog Language).

Depending on how the encounter proceeds, the dog may utilize other avoidance strategies, such as diverting the body away, lip licking, and rapid blinking. However, if the dog believes the threat is continuing, it may escalate the response by exposing the teeth and snarling. Snarling is not always accompanied by growling and may only be an upward movement of the lips. Long pendulous lips, long hair, or beards on the face may obscure such lip movements. Ear position in dogs can also give clues to canine intentions. A subordinate dog will usually lower the ears, and a fearful dog will have them pressed tight to the head. An assertive dog will have ears erect. Again, visualization of these positions can be inhibited by conformation and coat.

"Prolonged eye contact may be considered a threat by both assertive and submissive dogs."

Dogs will also attempt to change the way they position their body in reaction to a perceived threat. A dog standing its ground tries to look "bigger" by raising the hair along the neck and back, raising the tail in a high position and slowly wagging its tail from side to side. Other dogs attempt to look "smaller" by crouching down, tucking the tail between the legs, and even rolling over. Crouching and a lowered body posture in dogs is an appeasement posture designed to decrease the aggressive threat. The dog may be growling, snarling, or barking while maintaining either of these postures. These postures can result in a stand-off or a decrease or increase in the aggression. In some situations, the speed of approach of the intruder may alter how fast a dog progresses through each stage of the behavior, which can quickly escalate to biting and attack if escape does not seem possible or the threat seems quite high. 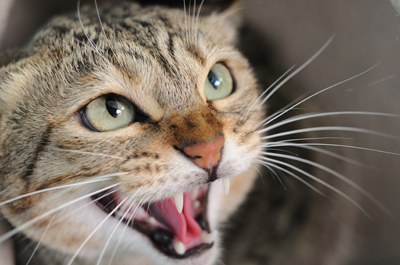 Often, the first sign is a dilation of the pupils (the dark part of the eye) and rapid side-to-side movements of the tail. This may be accompanied by putting the ears back or to the side and hissing or growling. In addition, the cat may "swipe" at the intruder with a front paw, either with the claws sheathed or exposed. Sometimes the cat will gather its legs under itself and appear ready to pounce. If the intruder is not too close or begins to leave, the aggressive encounter may end.

Cats have other more dramatic body postures that signal "go away." Cats frequently try to enhance their size and ferocity to make the threat more menacing. They will do this by turning sideways to the intruder, arching their back, holding the tail upright or straight down, and having their fur stand up. They may hiss, growl, and yowl at the same time. In other situations, a cat may crouch down, tail switching back and forth with the ears tight against the head, again with accompanying vocalization. A cat anticipating a fight may roll onto its back with claws extended, ready to fend off a foe.

How should I respond to these behaviors?

The distance between the animal and the intruder can be influential in determining the appropriate response. This is often called the "flight" distance. If the intrusion is far away, the animal may choose to flee; if the intrusion is very close, the animal may choose to fight, assuming flight would be unsuccessful. If flight is inhibited, such as when a dog or cat is cornered or tied up, aggressive responses become more likely.

"When approached rapidly, a dog or cat may go through the stages of aggressive behavior very quickly and bite without the intruder being able to react."

On their own territory, most dogs and some cats are more likely to fight than retreat, and dogs with their owners may stay close rather than retreating. When approached rapidly, a dog or cat may go through the stages of aggressive behavior very quickly and bite without the intruder being able to react. Dogs that are highly reactive or aroused may react with a defensive response almost reflexively, in comparison to a dog that is calm enough to make a quick assessment of the approaching stimulus and "decide" on the appropriate response. Dogs and cats that are mildly fearful may calm down if the intruder shows no fear, waits until the pet settles, and then offers a food reward. Reaching for a dog or cat while continuing to advance is likely to provoke further aggression. Some dogs may freeze, and while they are neither advancing or retreating, they are still in an aroused aggressive state, ready to respond with aggression, often quite quickly, even to subtle changes in the social interaction. Standing still without eye contact with the animal is often the best way to reduce aggression in a dog that is chasing.

Most cats will flee if given the opportunity. However, some cats will stand their ground and will scratch or bite if reached for. Bites are most likely if the cat is cornered or restrained and cannot escape, but some bold, confident cats will exhibit territorial displays toward intruders on their property in much the same manner as they might chase another cat out of the territory.

In some cases, despite standing still, avoiding further advance or retreating, the aggression continues. Because aggression depends on the situation, the pet’s level of motivation, previous experiences, and the type of aggression, it will be necessary for you to provide a detailed history to your veterinarian so that an accurate diagnosis and appropriate treatment plan can be established in these cases. Details on the diagnosis and types of aggression in dogs and cats can be found in separate handouts.