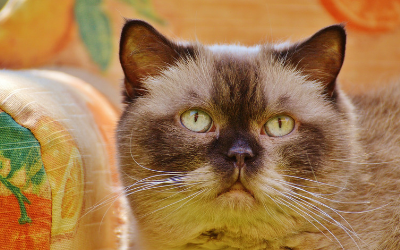 Fechavirus is a chapparvovirus, which is a type of parvovirus. Other common parvoviruses of veterinary importance include canine parvovirus and feline panleukopenia. Both of these viruses cause vomiting and diarrhea in affected animals, so it is somewhat unsurprising that fechavirus would be associated with similar clinical signs.

Fechavirus is a newly discovered gastrointestinal virus that was identified in cats in late 2018. The virus was discovered during an outbreak of vomiting and diarrhea among cats in three different animal shelters in British Columbia, Canada. Although the study veterinarians were unable to definitively determine whether fechavirus was responsible for the gastrointestinal signs that were seen in affected cats, researchers suspect that the outbreak was caused by fechavirus.

"Fechavirus is a newly discovered gastrointestinal virus that was identified in cats in late 2018."

During the initial outbreak, eight of seventeen affected cats had detectable levels of fechavirus in their feces. It is currently unknown whether fechavirus was responsible for the clinical signs in all seventeen of the ill cats and was merely difficult to isolate (which could account for why only eight cats tested positive) or whether the cats that tested negative may have had diarrhea due to other causes. Over time, further research should shed light on this question. At this time, however, researchers feel that the outbreak was caused primarily by fechavirus.

Does fechavirus occur outside the shelter setting?

At this point, we do not know the significance of fechavirus in pet cats. Shelter cats are under unique stresses, related to their change in environment, potential crowding, and other stressors. Stress is known to suppress the immune system in many species, including cats. It is possible that fechavirus occurs outside of the shelter environment as a mild or asymptomatic infection, but that it is capable of causing more significant disease outbreaks in the shelter environment.

It is also possible that this virus is a new virus that is not yet circulating significantly outside of the shelter setting. At this time, research is ongoing to determine the significance of fechavirus in the pet cat population.

What are the clinical signs of fechavirus?

Signs typically develop 5-7 days after exposure to an infected cat and persist for a total of 5-7 days.

At this time, there is no commercially available test for fechavirus. In a research setting, the virus can be identified via complex genetic analysis, but this is not a tool that is available to most veterinarians.

What is the treatment for fechavirus?

There is no specific treatment for fechavirus.

In the initial animal shelter outbreak, approximately one-third of the affected cats had such mild signs that treatment was not necessary. The other two-thirds of affected cats did require some degree of veterinary care.

What is the prognosis for fechavirus?

The prognosis for fechavirus is good. Affected cats typically improve within four to five days, although diarrhea may persist for over a week in some cases. None of the affected cats in the initial outbreak experienced a relapse or became re-infected; all cats had a complete resolution of illness within a matter of weeks.