What is swine flu?

What is the difference between swine flu and H1N1 influenza?

Over the years, different variants of swine flu viruses have emerged, some of which have infected humans with direct contact with infected pigs. In 2009 a new variant, H1N1 was identified and was unusual in the fact that this strain could pass between humans. A strain of the H1N1 subtype is responsible for the 2009 Influenza Pandemic that caused illness in humans on a global basis. To avoid misunderstanding about the source of this pandemic, authorities have recommended that it be referred to as H1N1 influenza.

If this is a flu of pigs, why do humans get it?

Usually, human cases of swine flu are uncommon and involve people who have close contact with pigs.

Genetic testing shows that the H1N1 strain is related to swine influenza virus strains but also contains genetic material from human and avian (bird) influenza strains. It is believed that a mixture of different influenza viruses infecting herds of pigs caused sharing or swapping of genetic information leading to the development of the new strain of H1N1.

Can dogs and cats catch the disease?

Since November 2009, several cases of H1N1 have been confirmed in cats and dogs in the United States. In all cases, it appears that pets were infected by direct transmission of the H1N1 virus from humans in the same household. Similar reports have been seen in different areas of the world including China and France. It appears to spread in the same manner as how humans are exposed to the virus: direct contact or touching objects that have been contaminated by discharges from a sneezing or coughing patient. If you experience flu-like symptoms it is recommended to take the same precautions with your pet as you would with other members of your family.

If your pet is experiencing flu-like symptoms or signs of an upper respiratory infection and you have recently experienced flu-like symptoms, seek immediate veterinary care. As human infections become increasingly widespread, transmission of the virus from humans to other animals is likely to occur with greater frequency.

Are pigs catching and spreading the H1N1 virus?

Veterinarians and government agencies continue to closely monitor the spread of H1N1. Since the 2009 H1N1 pandemic emerged, a very small number of infections have been identified in pig herds, and the virus was apparently spread to these herds by infected people. Pigs with flu symptoms should be isolated from other animals or people and be seen immediately by a veterinarian.

Can I catch it from pork products?

No. There is no evidence that touching uncooked pork could infect you.

As a general reminder, you should always follow good food safety practices when handling any raw meat. These practices include washing hands with warm water and soap both before and after handling any raw meat; wash the cutting board, knives, and countertops with hot, soapy water, and keep unwrapped raw meat away from any cooked food.

"As a general reminder, you should always follow good food safety practices when handling any raw meat."

The virus is killed at normal cooking temperatures. If you ensure that pork is cooked properly (not pink in the middle) to an internal temperature of 160°F (71°C), you will kill any foodborne viruses and bacteria.

What about H1N1 spreading to or from other animal species?

Danish authorities have reported the emergence of another novel influenza virus in mink, and genetic sequencing demonstrated a new combination of human and swine genes. This finding further suggests that influenza viruses in animals and humans increasingly behave like a pool of genes circulating among multiple hosts, and that the potential exists for novel influenza viruses to be generated in animals other than swine. This situation reinforces the need for close monitoring and close collaboration between public health and veterinary authorities.

How do we protect ourselves? 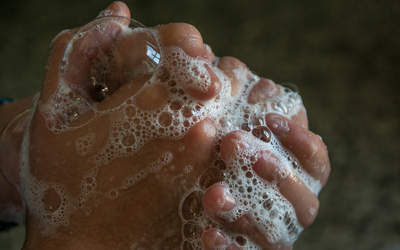 To minimize your chance of infection, wash your hands frequently and practice good hygiene. If you are ill, stay home to avoid spreading the virus, and sneeze or cough into a disposable tissue which you immediately throw away.

Evidence shows that the use of surgical masks by the general public is not effective in preventing transmission of influenza.

Where can I find the latest information on H1N1 influenza?

Valuable and up to date information can be learned from: