What is an autoimmune disease?

The term autoimmune is a confusing one. Our bodies have an immune system that protects us from foreign invaders that can cause disease and infection; however, if you have an autoimmune disease, your immune system attacks itself by mistake, causing serious illness. The immune cells fail to distinguish the body's normal healthy cells from foreign cells and thus try to destroy the normal tissues. The cause of this "mistake" is not well understood.

The causes of autoimmune diseases are not understood, although some theorize that genetics and/or environmental pollutants play a role. Certain drugs have also been reported as potential triggers for pemphigus foliaceus, a common form of autoimmune skin disease in cats. Early recognition is extremely important. Left untreated, the complications of autoimmune disease are serious and multiple-system involvement is common. This can make diagnosis and treatment very challenging and complicated.

What are some of the common autoimmune skin diseases in cats? 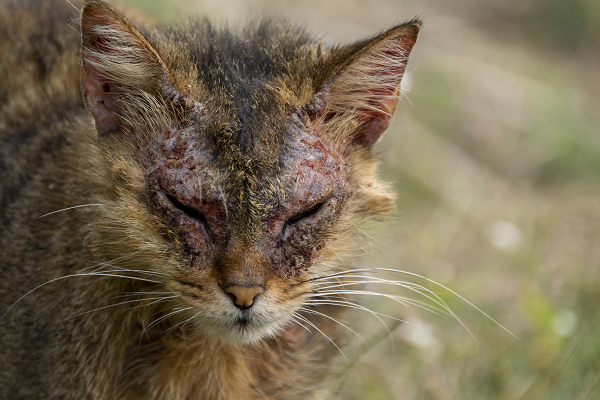 Pemphigus complex
Pemphigus is a group of five autoimmune skin diseases characterized by vesicles and bullae (large and small blisters) in the mouth and at mucocutaneous junctions (the junctions between the skin and the mucosal tissues). Commonly affected areas include the eyelids, lips, nostrils, and anus.

"Commonly affected areas include the eyelids, lips, nostrils, and anus."

Pemphigus foliaceus (PF): The term means "leaf-like pemphigus”. This is the most common autoimmune skin disease in cats. With PF, the patient develops crusts (scabs) and ulcers around the eyes, ears, footpads, groin, and bridge of the nose. In cats, lesions also develop at the toenail beds creating crusty sore feet. PF is rarely found in the mouth or at mucocutaneous junctions. It usually appears suddenly without a recognized cause but, in some cases, it may be drug-induced or can be the result of years of chronic skin disease.

Pemphigus vulgaris (PV): The term means "common pemphigus". It is the most frequent form of pemphigus in humans. Fluid-filled blisters, called vesicles, form in and around the mouth, eyelids, lips, nostrils, anus, prepuce, or vulva. These vesicles rupture easily, creating painful ulcers.

Pemphigus erythematosus (PE): The term means "red and inflamed pemphigus". The most common symptoms are redness, crusting, scales, and hair loss on the nose. Exposure to ultraviolet light worsens this form of pemphigus.

Panepidermal pustular pemphigus (PPP): PPP was previously classified as Pemphigus vegetans. This form is typified by thick and irregular vegetative lesions or lumps associated with chronic oozing and pustules. It is believed to be a more benign form of Pemphigus Vulgaris. To date, PPP has not been documented in cats.

Bullous pemphigoid
Bullous pemphigoid may sound like a form of pemphigus, but it is a different type of autoimmune skin disease. Bullous is the medical term for a large thin-walled sac filled with clear fluid. Usually, the skin is very itchy, and large red welts and hives often appear before or during the formation of blisters. Vesicles and ulcers may be found in the mouth, at mucocutaneous junctions, and in the armpits and groin. Evaluation of the vesicles is critical to the diagnosis and, because they rupture quickly after formation, the cat must often be hospitalized and examined every two hours until adequate biopsies can be obtained. Bullous pemphigoid resolves spontaneously in many cases. It is considered rare in cats.

Systemic lupus erythematosus
The classic example of a multi-systemic autoimmune disease is systemic lupus erythematosus (SLE), commonly referred to as lupus. Lupus is often called the "great imitator" because it can mimic almost any other disease state. The signs of SLE may be acute (sudden onset) or chronic, and they usually wax and wane. A fluctuating fever that does not respond to antibiotics is one of the classic clinical signs of SLE. Stiffness in the legs or shifting-leg lameness is also frequently reported with SLE. Other clinical signs may include blood abnormalities, such as hemolytic anemia, thrombocytopenia (low platelet numbers), and/or leukopenia (a low white blood count), or symmetrical dermatitis, especially over the bridge of the nose (often called a "butterfly lesion"). SLE is considered rare in cats. Cats with SLE should not be vaccinated.

"Lupus is often called the "great imitator" because it can mimic almost any other disease state."

Discoid lupus erythematosus
Discoid lupus erythematosus (DLE) is another autoimmune skin disease rarely seen in cats. The common clinical signs of DLE include loss of pigmentation around the cat's lips and the skin around the eyes. The ears and the genitals may also be affected. DLE can transform the surface of the nose from its normal "cobblestone" texture to smooth and flat. Ulcerated sores may occur. Some cats find the disease irritating, while others do not seem affected by it. It is possible that DLE is a non-systemic, less-serious type of systemic lupus erythematosus (SLE). It is considered a relatively benign autoimmune skin disease.

Are there autoimmune diseases that affect other body tissues in the cat?

Yes, examples of autoimmune diseases affecting tissues other than the skin include:

How is autoimmune skin disease diagnosed?

To definitively diagnose autoimmune skin disease, a biopsy of the affected skin is needed. Depending on the location, a skin biopsy may be performed with a local anesthetic. However, if the affected area involves the nose or face, or if the patient is anxious, sedation or general anesthesia may be required. A small round block of skin is removed with an instrument called a punch biopsy. This tissue sample is then sent to a veterinary pathologist to determine the diagnosis.

"To definitively diagnose autoimmune skin disease, a biopsy of the affected skin is needed."

How is autoimmune skin disease treated?

The general treatment for autoimmune skin disease is immunosuppression. This means that your cat will receive drugs to reduce the reaction of the immune system that is causing the disease. For many cats, treatment with prednisolone or dexamethasone will be sufficient. Other cats require stronger immunosuppressant medications such as chlorambucil (Leukeran®) or oral cyclosporine (Atopica®). If secondary bacterial infections are present, antibiotics and medicated baths or other topical treatments will be used. Your veterinarian will determine the optimal treatment plan for your cat's condition.

What is the prognosis for autoimmune skin disease?

The prognosis for autoimmune skin disease depends on your cat's specific diagnosis and the severity of symptoms. In general, this is a potentially life-threatening condition, requiring extensive diagnostic tests and treatments. Autoimmune disease is rarely curable but is often controllable with the appropriate medication.