Sidebones are a name for a condition that results in ossification of the collateral cartilages of the foot, i.e., the cartilages transform into much harder and less flexible bone. 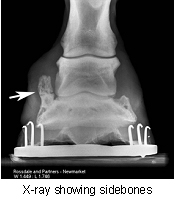 The collateral cartilages are found on the medial (inside) and lateral (outside) aspects of the foot and can be palpated (felt with a finger) just above the level of the coronary band, as flexible projections on each side of the pastern. They are normally important as shock-absorbers for the foot. Because cartilages are normally elastic, they allow the foot to deform during weight bearing, and then return to its previous shape.

Sidebones develop more commonly in the front rather than the hind feet and are more frequently seen in the heavy (draft) breeds of horses than the lighter breeds and ponies.

Infection of sidebones collateral cartilages/sidebones is called quittor and is an uncommon condition that was also more commonly seen when draft horses were plentiful (see our information sheet on Quittor).

What causes sidebones to develop?

Ossification, starting at the junction of the collateral cartilages with the pedal bone (P3 or distal phalanx) is believed to be part of most horse's normal aging processes. Mild sidebone formation, not associated with lameness, is not uncommonly seen in radiographs (x-rays) taken from older horses and young heavy working horses. Excessive, abnormal or premature sidebone formation, i.e., the promotion of transformation into bone may result from undue loading and concussion of the cartilages, that may be predisposed by a number of things:

Sidebones may be palpable (felt with a finger) above the coronet, when there is loss of normal pliability of the heel over the cartilage. The coronary band may bulge over the affected cartilage and the adjacent hoof wall may become more upright in conformation.

Lameness, primarily associated with sidebones, is rarely seen and if lameness occurs it is usually caused by complicating features, e.g., when the ossification becomes advanced and the growing sidebones press on adjacent sensitive hoof structures and deform the foot.

Ossification of the cartilages is confirmed by radiographic (x-ray) examination of the foot (normal cartilage cannot be seen, whereas bony ones can), comparing one foot with another, to aid interpretation.

How can sidebones be treated? 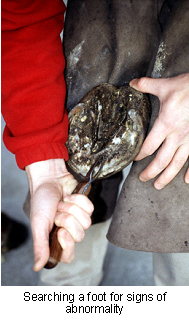 Foot imbalance should be corrected by skilled trimming and shoeing

Fit a flat, wide-webbed shoe, with a rolled toe, wide at the quarters and heels and extending beyond the ground surface at the heels, to support the heel and encourage expansion. No nails should be used behind the mid-quarters.

The horse should have an extended period of rest (6-8 weeks).

Your veterinarian may recommend a course of non-steroidal anti-inflammatory medication if the condition is causing lameness.

The affected foot should be re-shod regularly to gradually encourage heel expansion.

How can sidebones be prevented?

Your horse's feet should be regularly trimmed and shod to prevent imbalance, uneven weight-bearing and to ameliorate concussive forces in the foot.

Caution
The prognosis for complete resolution and return to soundness is poor for cases where sidebones are causing lameness, especially those with extensive cartilage ossification and hoof deformity.

So called 'fractured' sidebones, sometimes seen at radiographic (x-ray) examinations, are usually separate centers of ossification (bone formation), where disorganized transformation from cartilage to bone has created 'islands' of bone within the collateral cartilage, giving the impression of a fracture on the x-ray film.

If your horse is lame, all other causes should be excluded before sidebones are incriminated.