After a terrible accident, world-class care saved a dog’s legs – and his life. 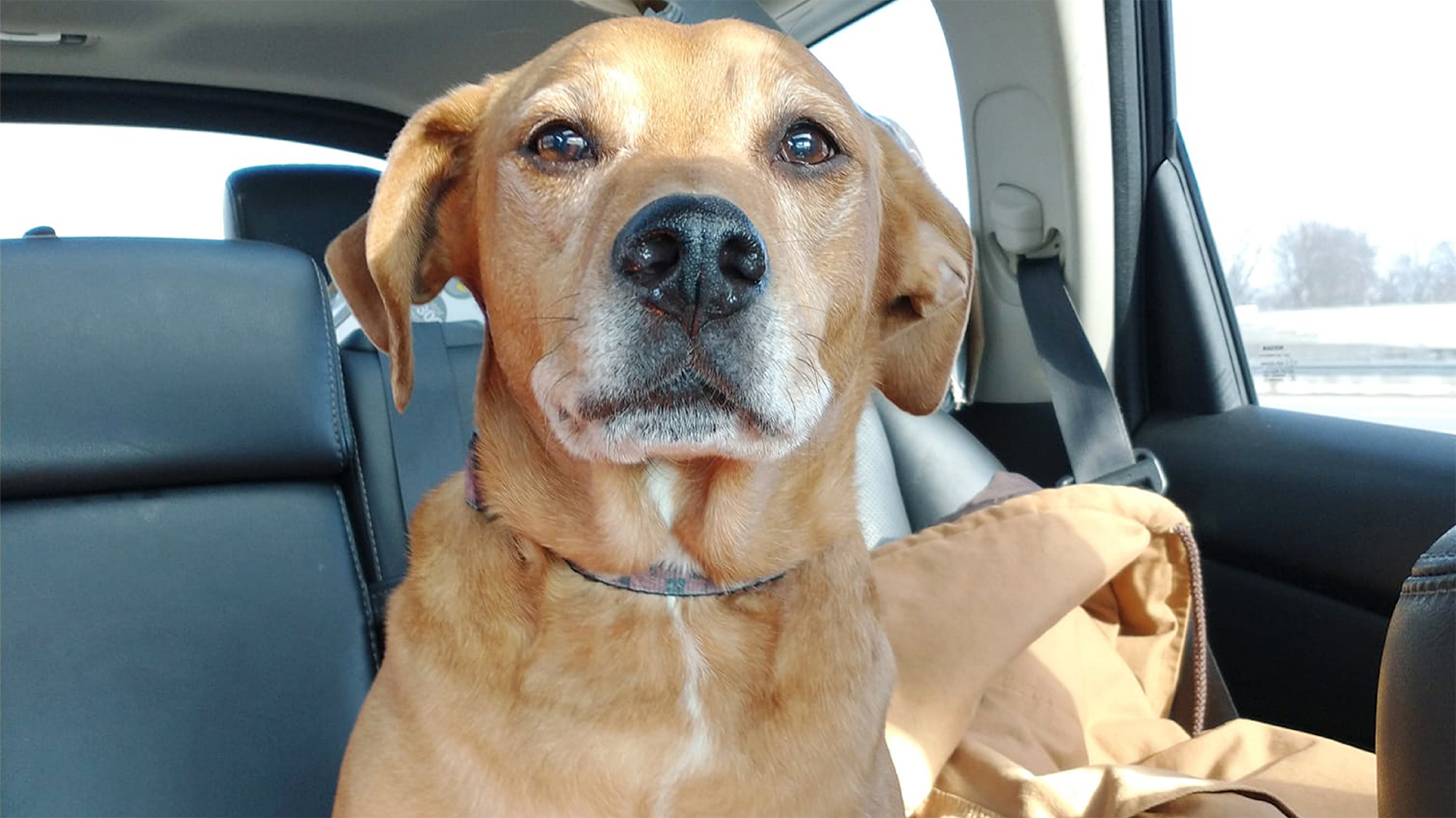 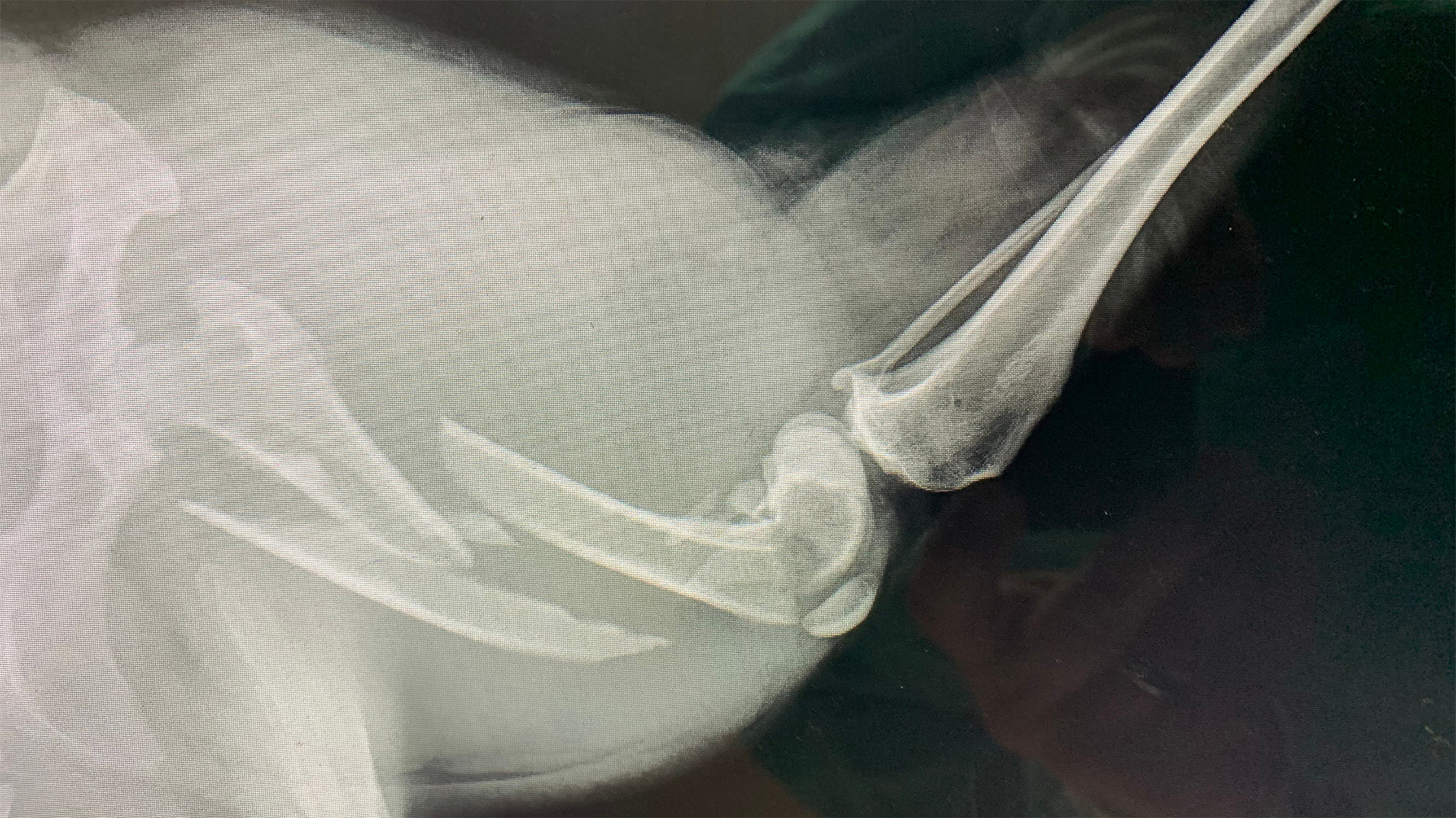 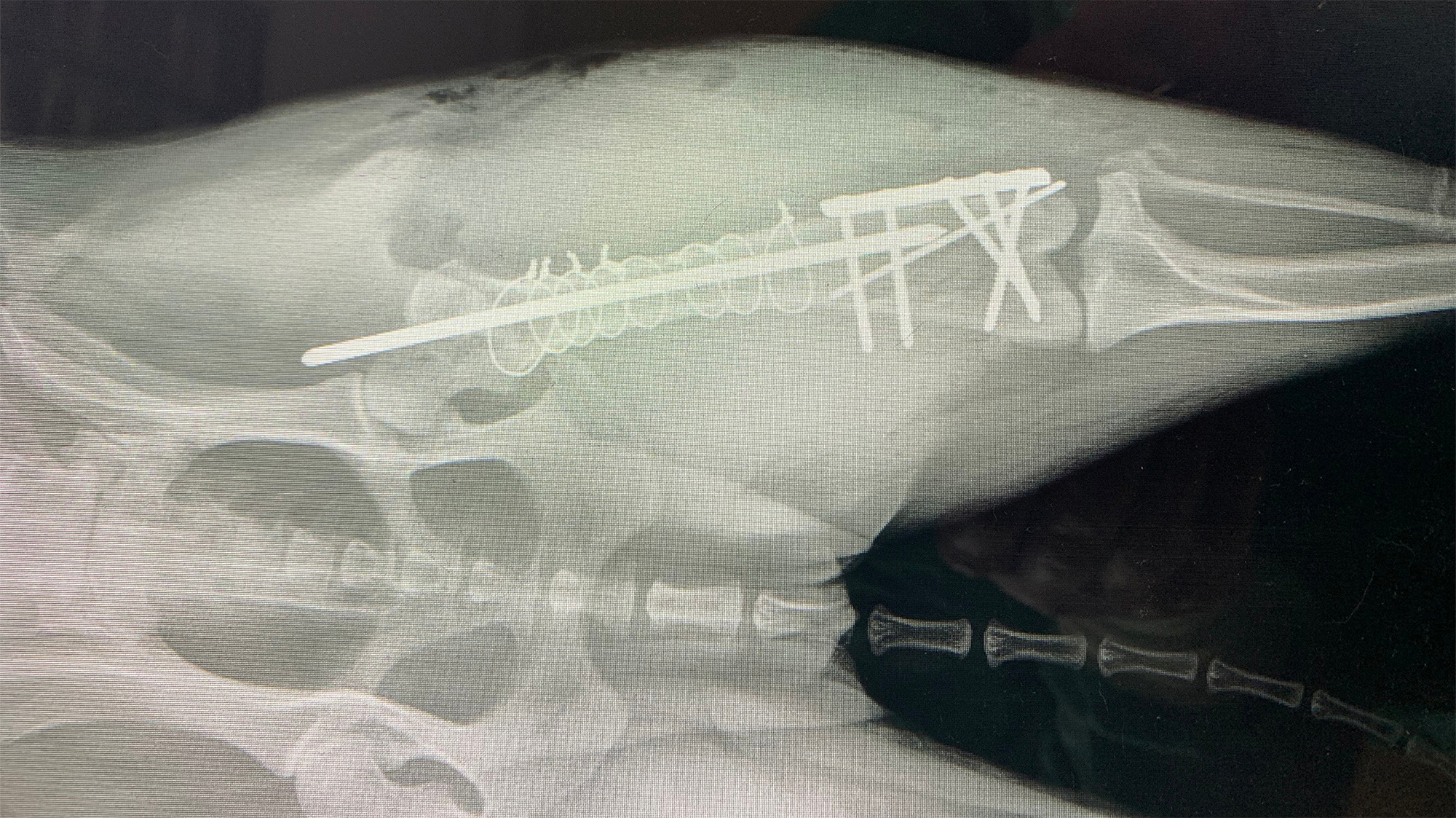 Chevy was in the car on his way to the veterinary hospital. It was a few days before Thanksgiving 2021. His owner’s daughter, Dona, was driving.

A “hot spot” on Chevy’s side needed to be rechecked. To keep Chevy from licking the wound, Dona had clothed him in a onesie and a cone (Elizabethan collar).

“He was riding in the front seat with me,” Dona says. “Then he moved to the floor behind my seat, where his blanket was. Then he hopped up on the back seat.”

As Dona slowed down for a light, Chevy stepped on the power window switch. Dona’s husband had done some repairs on the car over the weekend, and he had forgotten to turn the window child lock back on to prevent them from opening. The window slid open.

“I heard him bark once, and I looked back,” Dona says. “He was already half out the window.”

Dona grabbed for him, but his onesie was slippery, and her seatbelt kept her from reaching far enough.

‘I Was So Scared’

Chevy slid down the car door—there are still scratch marks, Dona says—and was lucky to avoid being run over. He fell into an empty turn lane.

Dona brought the car to a screeching halt: “I was so scared I couldn’t figure out how to unlock my car door or even put it in park.”

Strangers in other cars stopped to ask if she needed help. “All I could do was scoop him up and put him in the car and get to the veterinarian,” she says. “It was all I could do to carry him with my legs wanting to buckle under me.”

The rest of the trip to Chevy’s scheduled appointment at the veterinary hospital was a blur. A receptionist ran Chevy to the back. The painful dog received a shot of pain medication and other measure to help stabilize his condition. A few minutes later, a team member hustled back to tell Dona that Chevy’s femur was broken, and the doctor recommended two surgery options: amputation or being referred to a practice equipped to perform orthopedic surgery to try to save the leg.

Dona chose amputation in the moment, but a veterinary technician recommended that she consider driving Chevy to a nearby group of VCA hospitals with veterinarians known for orthopedic surgery. Dona’s family arrived, and they all agreed: They’d race to the doctors at VCA Sawmill Animal Hospital in Columbus, Ohio. The receptionist, though, warned them that the hospital was closing, and that they should detour to VCA Westerville East Animal Hospital.

The veterinarian met them all in the parking lot and told here Chevy’s surgery would happen first thing in the morning.

“They did the X-rays, and it showed his femur was broken in three places,” Dona says. “But the doctor said he loved a challenge and that he’d stay with Chevy from start to finish. He wouldn’t amputate, and he would stick to his quote for the cost of surgery no matter what.”

Dona remembers that he was confident and positive at a time when she needed that encouragement: “I remember him saying, ‘Why do we want to take the leg off? I don’t take legs off. I save them.’”

A Bony Problem, a Solid Outcome

Dr. Beckett confirmed it: He does love a challenge, and Chevy’s leg was just that. Multiple parts of the femur (the thigh bone) were fractured, including the condyle which is part of the knee joint. The X-ray showed three clear breaks, but they ran both up and down as well as side to side. During the one-hour-and-45-minute surgery, however, Dr. Beckett and a young veterinarian discovered seven breaks. Their surgical team used stainless steel metal implants to stabilize the multiple pieces of bone. In the end, Chevy would need extensive surgery to repair the fractures and stabilize the knee joint. Dr. Beckett and his team made it happen with an assortment of medical implants, including rods, plates, screws and wires.

Chevy stayed at the hospital for two days, so the veterinary team could manage his pain and watch for infection after surgery. The healing dog then went home for weeks of strict “bed rest.” For Chevy, restricted activity meant short leash walking to go potty, no jumping up and down on furniture, and no running.

Dr. Beckett also took care of Chevy’s hot spot, the original reason he was visiting a hospital in the first place. Medication normally used for burn victims healed the wound right up, according to Dona. “We had been going to the hospitals for two months, and Dr. Beckett had the wound healed within a week,” she says.

Chevy’s check-up with Dr. Beckett in January showed that the break wasn’t completely healed. Chevy still needed to take it easy, keeping unnecessary running around to a minimum. By February, though—just under two months after the surgery—Chevy was fully active again.

Dr. Beckett promised to try to save Chevy’s leg, and he did. “I’m proud of my team,” he says.

Ironically enough, Dona spends a lot of time in cars with animals these days. She volunteers as a driver for dogs who need trips from shelters and rescues to their new homes.  And, yes, when Chevy and any other animal rides in her car these days, Dona says that the windows are always, always locked.

Is your pet recovering from an injury? Healing from surgery? Living with a chronic condition? Veterinary rehabilitation can help your loved one achieve their best life.  Learn more about our rehabilitation services – and find a VCA hospital near you – at our website. 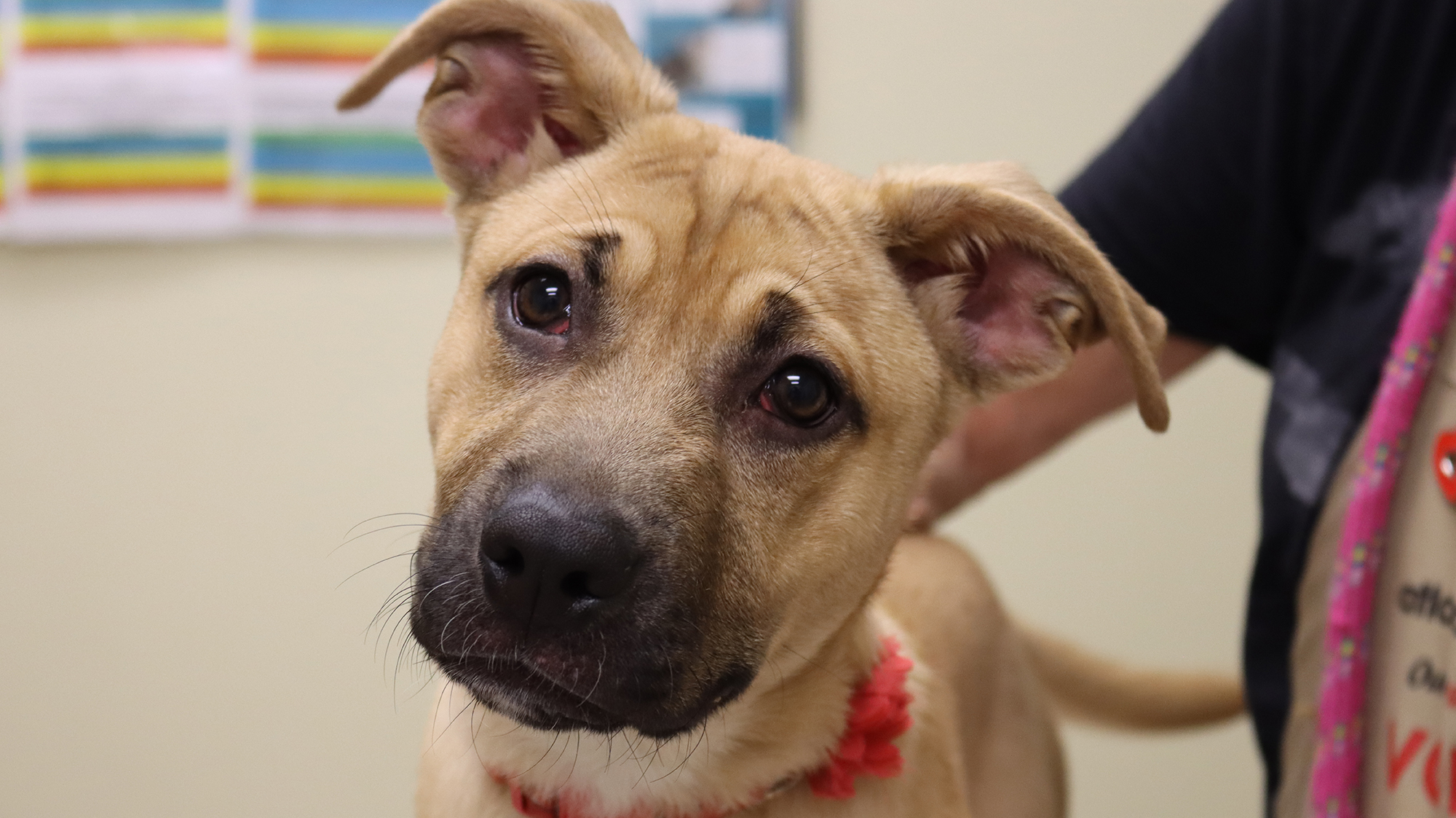 Social Responsibility
Asuna the Underdog Gets Back on All Fours 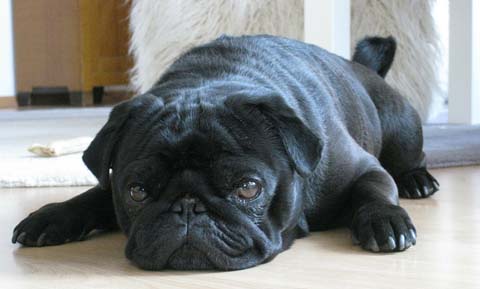