Anemia is a medical term referring to a reduced number of circulating red blood cells (RBC's), hemoglobin (Hb or Hgb), or both. It is not a specific disease, but rather the result of some other disease process or condition.

Red blood cells are produced in the bone marrow and are released into the blood, where they circulate for approximately three months. As the RBCs age or become damaged, they are removed from the bloodstream and their components are recycled to form new red blood cells. The number of red blood cells may become reduced because of decreased production, lysis (cell destruction), or increased loss as seen with hemorrhage (bleeding).

Hemoglobin delivers oxygen to the cells and tissues of the body, and a dog that is anemic will suffer from symptoms related to a lack of oxygen.

What are the signs of anemia?

The most easily observed and common clinical sign of anemia is a loss of the normal pink color of the gums; they may appear pale pink to white when examined.

How is anemia diagnosed?

There are several tests that are performed on the blood sample to diagnose anemia. The most common test is the packed cell volume (PCV) or hematocrit (HCT). These tests are often performed as part of a complete blood cell count (CBC). In a normal dog, 35% to 55% of the blood will be red blood cells. If the PCV is below 35%, the dog is generally considered anemic. Others tests to determine if a dog is anemic include the red blood cell count and the hemoglobin count.

What other tests are important when a dog is anemic?

A careful study of the blood smear is also important to look for blood parasites that might be causing red blood cell destruction and abnormal cells that could indicate leukemia (high white blood cell count). Additionally, a slide agglutination test can be done to help rule out the presence of autoimmune hemolytic anemia (see handout “Autoimmune Hemolytic Anemia in Dogs” for more information on this condition). 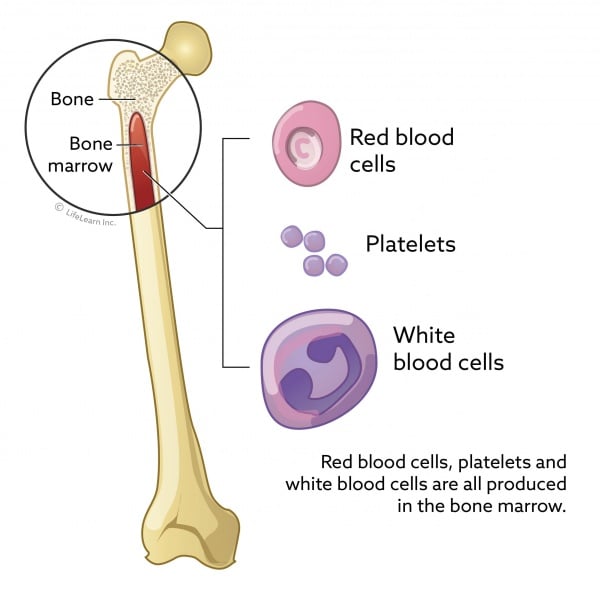 A bone marrow biopsy or aspirate is obtained if there is concern that the bone marrow is not responding appropriately to the anemic state (unresponsive or non-regenerative anemia). A sample of bone marrow is withdrawn and analyzed, providing valuable information about its condition, and occasionally revealing the cause of the anemia.

Biochemical profiles and urinalysis are other important tests for anemic dogs. These tests evaluate organ function and electrolyte levels providing important information about the overall health of the dog.

A fecal parasite exam is important to identify the presence of parasites in the intestinal tract that might be causing blood loss.

Imaging studies such as radiographs (X-rays) or ultrasound may be recommended to help determine the cause.

There are many diseases that can cause anemia. These are grouped into:

What diseases cause blood loss?

The main causes of blood loss in dogs include:

What diseases cause hemolysis?

The main causes of hemolysis include:

The main causes of bone marrow suppression that result in decreased red blood cell production include:

Do dogs get iron deficiency anemia?

Iron deficiency anemia is a somewhat common disease in people, especially women. Iron deficiency can be common in dogs and is usually secondary to some form of chronic blood loss. It is occasionally seen in puppies that are being fed very poor diets or who have severe hookworm infections. If the underlying cause is addressed and iron is supplemented, the prognosis can be good.

How is anemia treated?

If your dog's anemia is so severe that it is life-threatening, a blood transfusion will be needed. Before giving a transfusion, blood samples will be taken for diagnostic testing, or blood typing. The main purpose of a blood transfusion is to stabilize the dog while the underlying cause of the anemia is determined, and other treatments can begin to take effect.

Further, more specific treatment can be determined once the underlying disease causing the anemia has been diagnosed. Treatments may include corticosteroids (particularly for autoimmune hemolytic anemia), anthelmintics (de-worming medications such as pyrantel or fenbendazole), vitamin K1 in cases of some rodenticide toxicities, antibiotics such as doxycycline with some infectious causes, or surgery (in cases of a damaged organ such as the spleen or liver). Your veterinarian will outline a treatment plan specific to your dog's needs based on diagnostic test results.

What is the prognosis for anemia?

The prognosis for dogs with anemia is based on the specific diagnosis, as well as the dog's general condition at the time of diagnosis.

If the anemia is diagnosed early and the dog is in relatively good health, the prognosis is good. Dogs that have severe anemia, either caused by toxins, cancer, or autoimmune diseases, or as a result of severe trauma have a less favorable prognosis.