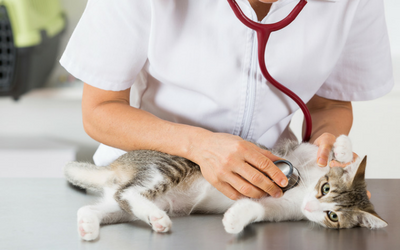 Aspirin (acetylsalicylic acid or ASA) is a common over-the-counter nonsteroidal anti-inflammatory drug (NSAID) used to treat fever, pain and inflammation. Aspirin may also be used to prevent the formation of blood clots. In some cases, aspirin may be prescribed to decrease the likelihood of blood clots in cats. It is very important to carefully follow directions when using aspirin in cats, in order to avoid poisoning. Aspirin may be the only ingredient in a medication or be part of a combination product containing other medications such as acetaminophen, opioids, antihistamines, decongestants, and/or caffeine.

Aspirin is only one compound in a group of chemicals called salicylates. All salicylates have the potential to cause toxicity. These chemicals may be found in a wide range of products including pain medications, Pepto-Bismol, wintergreen oil, sunscreen, lip balms, hair and skin care products, toothpaste, wart removers and pain creams. The risk for poisoning depends upon the type of salicylate and the amount to which the pet was exposed.

What is aspirin poisoning?

Aspirin and other salicylate-containing products are often found in homes with cats. Poisoning may happen when pets accidentally get into these products and ingest too large of a dose. In some cases, owners may administer aspirin or other salicylates to treat their cat’s pain or gastrointestinal upset prior to consulting a veterinarian. Aspirin poisoning may occur from a single dose or  repeated dosing.

Previously existing medical conditions such as clotting disorders, kidney disease or liver disease may increase the risk of poisoning. Cats that are already taking steroids or other NSAIDs also have a higher risk of poisoning.

Aspirin, and other NSAIDs, act by blocking certain chemical processes in the body that cause inflammation. Unfortunately, these chemical processes are also important in maintaining normal gastrointestinal, kidney, and blood clotting functions. Cats are especially sensitive to aspirin and salicylates. Cats have fewer functional cellular pathways to metabolize certain types of drugs, including aspirin. This means they take significantly longer to eliminate salicylates from their bodies than humans or dogs. Since cats are not able to metabolize aspirin efficiently, they are more vulnerable to poisoning.

What are the signs of aspirin poisoning?

Cats may initially show no signs of aspirin poisoning. Signs can vary depending upon the dose and product to which the cat was exposed. The most common side effect of aspirin/salicylate exposure is gastrointestinal irritation and ulceration (bleeding into the stomach/intestines). Additional signs related to the gastrointestinal tract such as a decreased appetite, abdominal pain, vomiting (possibly with blood), diarrhea, and dark tarry stools, can also occur. If bleeding into the gut occurs, pale gums, weakness, or depression may be seen. High doses of aspirin can result in damage to other organs and more serious signs such as an increased respiratory rate (due to the blood becoming too acidic), high body temperature (from cellular damage), a wobbly gait, tremors, seizures, coma, decreased blood clotting, liver or kidney damage, and even death.

If you suspect your pet ingested any form of aspirin/salicylates, it is important to contact your veterinarian or Pet Poison Helpline, a 24/7 animal poison control center, at 1-800-213-6680 right away to help determine the risk of poisoning to your pet.

How is aspirin poisoning diagnosed? 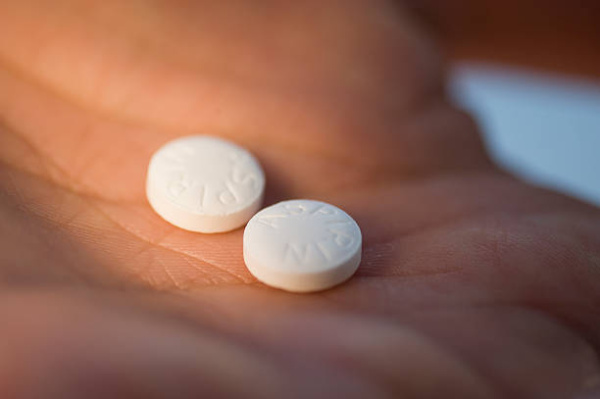 Most cases are diagnosed in pets that have the expected signs and a known or suspected exposure to aspirin. Blood work is necessary to evaluate the kidneys, liver, electrolytes, and blood cell counts. Radiographs (x-rays) of the chest can identify lung disorders secondary to aspirin poisoning. Tests to assess the pet’s blood clotting ability or acidity levels may also be performed.

Salicylate levels in the blood can be measured at a human hospital or specialized veterinary diagnostic laboratory. Testing for salicylate levels is not common. The results may not be returned quickly and finding a laboratory to run the testing for animals may be difficult. Since the results may be delayed, treatment is often started without testing if poisoning is suspected.

How is aspirin poisoning treated?

There is no antidote for aspirin poisoning but early decontamination and treatment decrease the risk for serious harm. If aspirin ingestion occurred within a few hours of treatment, the veterinarian may induce vomiting. Inducing vomiting at home in cats should never be attempted because it may cause severe damage to the stomach lining. Once vomiting is controlled, activated charcoal may be administered. This can decrease absorption of aspirin by the gastrointestinal tract. Activated charcoal should only be administered by a veterinarian. Otherwise, aspiration into the lungs and life-threatening changes in blood sodium levels may occur. Antacids, anti-nausea medications and stomach protectants are commonly administered.

Early decontamination and treatment decrease the risk for serious harm. If aspirin ingestion occurred within a few hours of treatment, your veterinarian may induce vomiting. (Inducing vomiting at home should never be attempted in cats, because it may cause severe damage to the stomach lining.) Once vomiting is controlled, activated charcoal may be administered, to decrease absorption of aspirin by the gastrointestinal tract. Activated charcoal should only be administered by a veterinarian. Otherwise, aspiration into the lungs and life-threatening changes in blood sodium levels may occur. Antacids, anti-nausea medications and stomach protectants are commonly administered.

Depending upon the dose ingested, hospitalized care may be needed. Fluids may be administered under the skin or intravenously. Cats developing more serious signs may require intensive therapy as they have an increased risk for long term effects or death. Blood work to monitor the liver and kidney function as well as the red blood cell count may be performed. Pets that develop a low red blood cell count (anemia) or difficulty breathing may require oxygen supplementation or a blood transfusion. Liver protectants, muscle relaxants, and medications to control seizures may be necessary.

What care will my cat require after treatment?

In most cases of aspirin/salicylate poisoning, stomach protectants and a bland diet will be recommended for several days following exposure. Cats with exposure to higher doses, or with chronic exposure, may require monitoring for liver or kidney damage even after they are discharged. If kidney damage occurs, fluids under the skin may need to be continued at home. Cats that have liver damage will often be on liver protectants. Depending upon the cat’s condition, medications and monitoring may be continued for several days to months. In some cases, liver or kidney damage may compromise long-term function in cats who have recovered from aspirin toxicity.