What is a displacement behavior?

Compulsive behaviors appear to be abnormal
because they are excessive, exceedingly
intense, or performed out of context.

Overgrooming in the form of acral lick dermatitis in dogs and psychogenic alopecia in cats, as well as yawning, circling, and vocalizations, may be performed as displacement behaviors.

What is a redirected behavior?

When an animal is placed in a situation of conflict or frustration, another behavioral option is to redirect the behavior toward an alternative target. This may be the case when a cat is sitting on the windowsill and is aroused by cats on the property. Because access to the stimulus is prevented, the aggression may be redirected to another cat or person who approaches. This is known as redirected behavior.

What is a stereotype?

Stereotypes are repetitive behavior patterns without an obvious goal or function. They are usually derived from normal behaviors. Stereotypic behaviors may be performed as components of displacement behaviors or compulsive disorders (see below). They can also be due to physiological changes such as might occur with a neurological disorder (circling, head bobbing). Examples of stereotypic behavior include pacing and excessive grooming. 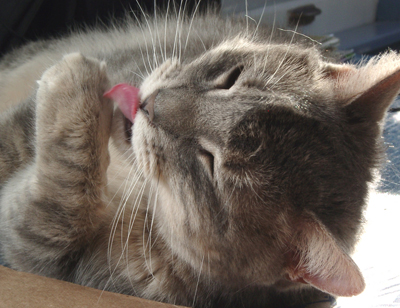 What is a compulsive disorder?

When an animal is repeatedly placed in a state of conflict, displacement behaviors may begin to be manifested during any state of stress or arousal. Eventually, the behavior may become compulsive as the pet loses control over initiating or terminating it. Thus, rather than displaying the behavior only in the situations in which there is conflict, frustration, or high arousal, the compulsive disorder may be displayed in times when the animal is minimally aroused.

Compulsive behaviors are often derived from normal behavior patterns but appear to be abnormal because they are excessive, exceedingly intense, or performed out of context; do not help the pet to settle or cope; and begin to interfere with normal daily function. Although some compulsive disorders are repetitive and may therefore be referred to as stereotypic (wool sucking, pacing, tail chasiituations and times when compulsive behaviors are likely to arise. They can then initiate an alternative activity (before the compulsive behavior is overt) that is incompatible with the problem behavior, such as play, training, feeding, or providing a chew toy. Finding the most appealing and durable toys for the pet, including toys that require manipulation to release food treats, feeding frozen food and treats (see Working for Food), and altering the environment (e.g., hiding treats for the pet to find) may help to keep the pet occupied and distracted at times when the compulsive disorder might otherwise be displayed (see Behavior Management Products, and Play and Exercise) and on play and destructive behaviors in cats and dogs (see Cat Behavior and Training - Play and Play Toys).

Owner responses to the problem behavior can further aggravate the problem. Giving attention or trying to stop the problem by giving a treat or toys may further reinforce the problem. Punishment can serve as a form of behavior reinforcement; punishment and owner frustration or anxiety over the pet’s behavior can also further increase anxiety. On the other hand, if the behavior is observed in the owner’s presence and ignoring the pet or walking away does not stop the response, then some form of remote interruption might be used (ultrasonics, water gun, siren, remote citronella collar, or leash and halter). Once the undesirable behavior has been interrupted or inhibited, the pet should be reoriented into alternative acceptable forms of play, or settle and relaxation exercises can be practiced.

Denying the pet access to the focus of its compulsion (or obsession) has mixed results. For example, a bandage or an Elizabethan collar may allow acral lick dermatitis or feline psychogenic alopecia to heal, but once the collar is removed, most cases relapse. In many cases, restricting access will worsen the problem by increasing anxiety or arousal. Instead, the underlying cause of the anxiety or conflict should be identified and removed, or the animal should be desensitized to the stimulus. Behavioral modification is particularly effective when owners can identify and predict those situations and times when compulsive behaviors are likely to arise.

Can drugs be of value in the treatment of compulsive disorders?

Drug therapy may be extremely useful for pets with compulsive disorders just as it is in humans with obsessive-compulsive disorders. A course of therapy with anti-anxiety drugs or pheromones may be useful for resolving the underlying anxiety and controlling the arousal that might be associated with displacement behaviors. Anxiolytics might also be used concurrently with drugs for compulsive disorders when the pet must be exposed to a potentially stressful or anxiety-producing situation (new home, dramatic change in schedule, new baby). Because lowered serotonin and increased dopamine levels may be associated with some compulsive disorders, drugs that bring about a normalization of one or both of these neurotransmitters (e.g., clomipramine, sertraline, paroxetine, fluoxetine) may be effective in the treatment of these disorders.

Drug therapy may be extremely useful
for pets with compulsive disorders.

Some compulsive disorders such as head bobbing and spinning in dogs or hyperesthesia in cats may be difficult to differentiate from seizure disorders. In cases where a seizure disorder has not been ruled out, a therapeutic response trial of anticonvulsant medications might first be considered.