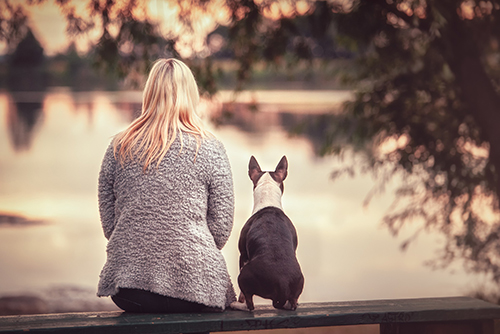 When does a female dog first come into heat?

Puberty, or sexual maturity, in the female dog usually occurs around six months of age. The smaller breeds tend to go into estrus, or "heat," earlier, and some females can have their first "heat" cycle as early as four months of age. On the other hand, large and giant breed dogs can be up to two years old before they come into heat for the first time.

How often do female dogs come into heat?

On average, this occurs about twice a year, although it varies from dog to dog. When cycling first begins, there may be a great deal of variability in the time between cycles. This is normal. Some females take eighteen months to two years to develop a regular cycle.

"When cycling first begins, there may be a great deal of variability in the time between cycles."

Small breeds tend to cycle more frequently than the larger breeds. Three and occasionally four heat cycles per year can be normal in some females. Very large breeds may only cycle once every 12-18 months. In most giant breeds (Great Danes, Irish Wolfhounds, St. Bernard, etc.), an estrus cycle every twelve months is common.

How long does a heat cycle or estrus last?

Heat cycles vary but average two to three weeks for most dogs. The heat cycle begins with the first signs of vulvar swelling or vaginal discharge. It ends when all discharge ceases and the vulva has returned to its normal size.

How can I prevent my female dog from coming into heat and having puppies?

There are two methods to prevent estrus, or heat, in a female dog:

1. Surgery - ovariohysterectomy (spay): Recommended. Ovariohysterectomy, or a spay surgery, involves the surgical removal of the entire female reproductive tract, including the uterus and both ovaries. It is a permanent and irreversible procedure. Although this is a major abdominal surgery involving general anesthesia, there is little risk associated with the procedure when it is performed by a veterinarian.

Recently, some veterinarians have begun to offer and recommend an ovariectomy; in this procedure, only the ovaries are removed, leaving the uterus. Ask your veterinarian what they recommend for your dog.

When a woman has a hysterectomy, the ovaries are not usually removed. Why is it necessary to remove the ovaries in my dog?

The reproductive cycle of the female dog is entirely different from that of woman. Female dogs come into "season," or heat, twice a year on average, and it is only at that time that they can conceive. The purpose of an ovariohysterectomy is to ensure that the estrus cycle does not occur. This has numerous health advantages for the dog, including reducing the risk of breast cancer and eliminating the risk of ovarian and uterine cancer. In addition, unwanted litters are prevented and the behavioral changes associated with "heat" are avoided.

Are there any other advantages to spaying?

Pyometra
Pyometra refers to infection of the uterus. This is a serious and potentially life-threatening condition in un-spayed females, and the risk of pyometra increases with age. Spaying (ovariohysterectomy) eliminates the risk of this condition.

"Spaying a female dog...reduces her risk of developing breast cancer to less than 0.5%..."

Medical control of estrus
There are currently no approved medications to control the heat cycle in dogs in the United States or Canada. In the European Union countries, there are some medications that are used to prevent pregnancy and regulate estrus. Some of these drugs have a high incidence of serious, even life-threatening side effects.