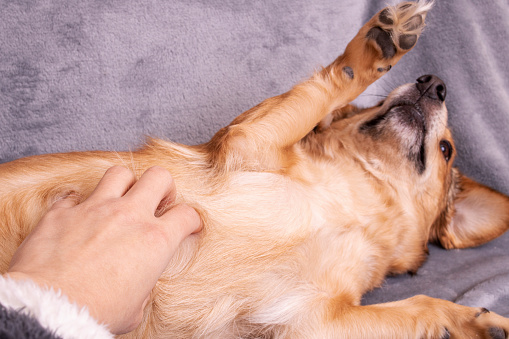 Gastric dilatation and volvulus (GDV) is a life-threatening disorder most commonly seen in large, deep-chested dogs, although any dog may be affected. In its early stage, the stomach fills with gas, causing a simple gastric dilatation or "bloat". Sometimes, the condition progresses no further than a bloat. A GDV, however, is a progression of the bloat into a volvulus, in which the huge, gas-filled stomach twists upon itself so that both the entrance and exit of the stomach become blocked. This is a life-threatening emergency that requires urgent surgery to correct.

What causes the condition?

The exact cause of GDV is still unknown. The condition is seen more commonly in large, deep-chested male dogs. Exercise after ingestion of large meals or large amounts of water may increase risk.

"Stress may be a contributing factor to GDV..."

Anxiety may be a contributing factor to GDV—in recent studies, dogs that were relaxed and calm were at lower risk of developing GDV than dogs described as "hyper" or "fearful".

Yes. This is probably one of the most serious non-traumatic conditions seen in dogs. Immediate vetirinary attention (within minutes to a few hours)  is required to save the dog's life.

Are some dogs more prone than others?

Yes. Statistically, we know that large, deep-chested breeds are more prone to GDV. Predisposed breeds include Great Danes, Saint Bernards, Weimaraners, Irish Setters, Gordon Setters, Standard Poodles, Basset Hounds, Doberman Pinschers, and Old English Sheepdogs. In a recent study, the top three breeds found to be at risk of bloat were 1) Great Dane, 2) St. Bernard, and 3) Weimaraner. It must be noted, however, that any dog can bloat, even Dachshunds and Chihuahuas. The condition has been reported to most commonly occur two to three hours after eating a large meal, although bloat and GDV can occur at any time.

Factors Increasing the Risk of Bloat:

Factors Decreasing the Risk of Bloat:

No. These two conditions often look identical on physical examination. X-rays and other diagnostic tests are necessary to determine if the stomach has twisted.

Why does the dog collapse?

The gas filled stomach presses on the large veins in the abdomen, which carry blood back to the heart. This pressure compromises the circulation of blood throughout the body.

"Vital tissues are deprived of blood and oxygen, resulting in systemic shock."

Vital tissues are deprived of blood and oxygen, resulting in systemic shock. In addition, the pressure of the gas on the stomach wall results in inadequate circulation to the wall, causing tissue death within the stomach. Digestion ceases and toxins begin to accumulate in the blood, worsening the shock. As the stomach continues to swell, the stomach wall can rupture.

What can be done to treat bloat or GDV?

This is an immediate and life-threatening emergency and requires immediate veterinary intervention. It is imperative that the pressure on the stomach wall and internal organs is reduced as soon as possible. The veterinarian may first attempt to pass a stomach tube. If this is not possible due to twisting of the stomach, a large bore needle or catheter may be inserted through the skin into the stomach to relieve the pressure in the stomach.

Shock treatment must begin immediately, using intravenous fluids and emergency medications. Once the patient becomes stable, surgical correction of the GDV must be performed. It may be necessary to delay this major abdominal surgery until the patient is able to undergo anesthesia.

How is the surgery done?

The primary goals of surgery are to return the stomach to its normal position, to remove any dead or dying stomach tissues, and to help prevent future GDV. Several different techniques may be used, including gastropexy (suturing the stomach wall to the abdominal wall) and pyloroplasty (surgically opening of the pylorus to improve stomach outflow). Your veterinarian will determine the most appropriate technique or combination of techniques for your pet's condition. Sometimes the spleen will need to be removed if it has been significantly damaged by the twisted and bloated stomach.

What is the survival rate?

This depends on many factors, including how long the pet has had GDV, the degree of shock, the severity of the condition, cardiac problems, stomach wall necrosis, length of surgery, etc.

Can the condition be prevented?

Gastropexy (surgical attachment of stomach to the body wall) is the most effective means of prevention. In high-risk breeds, some veterinarians recommend performing prophylactic (preventative) gastropexy, at the time of spay or neuter. See handout "Gastropexy" for more information on this surgery.

"This does not prevent dilatation (bloat) but does prevent twisting (volvulus) in the majority of cases."

This does not prevent dilatation (bloat) but does prevent twisting (volvulus) in the majority of cases. Without gastropexy, the recurrence rate of bloat has been reported to be as high as 75%.

Please do not hesitate to discuss any concerns you have regarding this serious condition with your veterinarian.