What is carpal laxity? 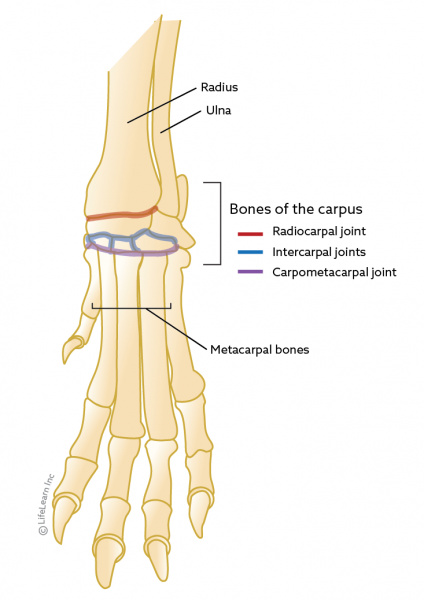 Carpal laxity is a condition in which the carpus (wrist) has an abnormal or excessive range of motion. Normally, when a dog is weight-bearing, you should be able to draw a nearly straight line through the carpus. In a dog with carpal laxity, however, this is not the case. The carpus is lax (loose), instead of being held in its normal position.

In carpal hyperextension, which is the more common type of carpal laxity, the carpal joint (wrist joint) is hyper-extended. Affected puppies appear flat-footed in the front legs, because their carpus collapses towards the ground. The accessory carpal pad, which is the small pad located behind the carpus, may even touch the ground when these puppies walk.

Carpal flexion is the opposite of carpal hyperextension and is less common. The carpus of a puppy with carpal flexion is bowed forward during weight bearing, such that the carpus bulges from the front of the leg.

The underlying cause of carpal laxity has not been definitively determined, but many theories have been proposed. Potential causes include nutritional factors (specifically excessive caloric intake and/or excessive calcium intake), genetic factors, and being raised on slippery flooring surfaces.

While a single underlying cause of carpal laxity has not been identified, most cases involve some degree of muscle weakness. A lack of exercise and increased time on slippery surfaces both may play a role, either individually or in combination with other factors. Without adequate development of the muscles that surround and stabilize the carpus, the joint itself becomes unstable.

Although carpal laxity typically affects both front legs, sometimes a single limb is affected. This most commonly occurs when the other limb is splinted or bandaged, due to an injury. When a puppy’s leg is splinted, the opposite leg must do all the work of weightbearing. Many puppies do not have adequate muscles surrounding the carpus to do this effectively, so this may lead to instability of the carpus.

What are the clinical signs of carpal laxity?

Carpal laxity is most commonly seen in large-breed dogs. Signs of carpal laxity may be seen at any time from 6 weeks of age onward, but the condition is most commonly noted between three and six months of age. Some puppies develop signs seemingly overnight, while other cases progress slowly, over a period of several days to weeks.

"Some puppies develop signs seemingly overnight, while other cases progress slowly,
over a period of several days to weeks."

In most puppies, the condition does not appear to be painful. In fact, in mild cases, affected puppies often run and play normally. These puppies do not even seem to notice that they have an orthopedic issue, until the owner notices that the front legs look “funny” (carpal flexion or carpal hyperextension). In more severe cases, though, affected puppies may appear weak on the affected limbs and reluctant to walk or run.

How is carpal laxity diagnosed?

Your veterinarian will begin by performing a thorough physical exam. In addition to examining your puppy’s carpi (wrists), your veterinarian will evaluate your puppy’s overall body condition and check the other bones and joints for abnormalities, and will look for signs of pain when palpating the abnormal joints, because pain could suggest an injury or other abnormality.

Radiographs (X-rays) may also be performed, especially if only one leg is affected. Although radiographs are often normal in puppies with carpal laxity, they can be used to rule out other conditions (like a broken bone) that might also cause a joint abnormality.

Your veterinarian may also recommend bloodwork. Blood tests, including a complete blood cell count and serum biochemistry panel, are used to look for medical causes of muscle weakness. Additionally, blood tests can help evaluate the overall nutritional status of your puppy.

How is carpal laxity treated?

Activity modification is often recommended for affected puppies. These puppies should be kept off slippery surfaces, instead allowing them to move on surfaces that provide better footing. Carpet, grass, and rubber mats are all good flooring options for puppies with carpal laxity. By allowing puppies to move around on these surfaces, the risk of injury is minimized and the muscles around the carpus can develop to help stabilize the joint.

In severe cases, your veterinarian may place a light bandage or wrap around the carpus for added stability. This bandage is left in place for approximately one week. There is really no right or wrong answer as to whether puppies with carpal laxity should have splints placed; studies have shown that either approach (splint or no splint) can be effective.

"These puppies should be kept off slippery surfaces, instead allowing them to
move on surfaces that provide better footing."

Your veterinarian may also make dietary recommendations for your puppy, especially if your puppy has been receiving suboptimal nutrition. While the role of nutrition in carpal laxity is unknown, the safest option is to feed a high-quality, well-balanced commercial puppy food. If you have a large breed dog, it is best to feed a large-breed puppy food that is formulated for your puppy’s unique nutritional needs.

Your veterinarian may also recommend physical therapy exercises that you can do at home, depending on your puppy’s condition. Massage and passive range of motion exercises (flexing and extending the carpus) can both help address carpal laxity.

What is the prognosis for carpal laxity?

In most cases, carpal laxity is self-limiting. Most puppies with carpal laxity will appear completely normal within six to eight weeks.