Why does my cat persistently cry?

Most owner complaints about feline vocalization are either to do with the intensity and persistence of the vocalization, or the fact that it occurs at night or at other times when family members or neighbors are trying to sleep. Attention getting behaviors, sexual (estrus or male) behaviors, play behavior, medical problems, discomfort, and aggressive displays are the most common reasons for feline vocalization. Of course, since some cats are quite active at night, it is not surprising that many owners are concerned about their cat’s nighttime vocalization and activity. Some breeds such as the Siamese are much more likely to be vocal than others. 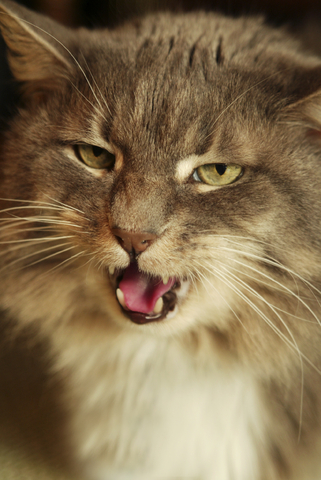 What can be done to prevent undesirable vocalization?

For excessive nighttime vocalization, providing a stimulating daytime routine with regular offerings of food, social play, and exploratory toys may help to program and change the schedule of the cat so that it sleeps through the night (see Nocturnal Activity). The goal is to engage the cat in desirable activities where the cat is not vocalizing such as playing with toys, working for food, and engaging in exploration, climbing, or perching (see Trimming Nails and Brushing Teeth, Enrichment for Indoor Cats, and Play and Play Toys). Rewards of all types (play, affection, treats) should only be given when your cat’s behavior is acceptable (quiet and not vocal); in fact, clicker training might be an excellent way to effectively reward quiet behaviors (see Clicker and Target Training). Never reward vocalization by providing food, attention, or play when the cat vocalizes, since it is likely to reinforce the behavior and cause it to continue. Mild outbursts of vocalization can either be ignored or interrupted with remote punishment techniques such as a water gun, compressed air, loud verbal no, or alarm device, but never with physical punishment.

How can excessive vocalization problems be treated?

Understanding the problem
The cause of the cat’s vocalization, those stimuli that are associated with the onset of the behavior as well as all factors that might be reinforcing the behavior, must be understood. For some cats, especially those that are middle aged or elderly, veterinary examination is recommended to rule out potential medical causes of vocalization such as pain, endocrine dysfunction and hypertension.
Some older cats may begin to vocalize as their senses or cognitive function begins to decline (senility) (see Senior Pet Behavior Problems).

"Some older cats may begin to vocalize."

Modify the environment
If the cat can be denied exposure to the stimuli for the vocalization (e.g., the sight or sounds of other cats), or prevented from performing the behavior (e.g., keeping the cat out of the owner’s bedroom at night), the problem can often be successfully resolved. Alternately, providing activities that will keep the cat quietly occupied through the night (timed feeders, manipulation feeding toys) might also be acceptable.

Modify the behavior
The most important aspect of a correction program is to give the pet a sufficiently enriching program and enough activities to keep it occupied and content. Develop a daily routine that provides a variety of social play and object exploration activities. Focus on when and where the pet is most likely to vocalize and schedule playtime or a stimulating activity (such as a feeding toy or a paper bag to explore) before the problems arise. Then, when the vocalizing begins, determine what may be rewarding the behavior.

"Many owners inadvertently encourage the behavior by giving the cat something it values during vocalization."

Many owners inadvertently encourage the behavior by giving the cat something it values during vocalization, perhaps in an attempt to quiet it down. Attention, affection, play, a treat, and allowing the cat access to a desirable area (outdoors, indoors) are all forms of reinforcement. Reinforcement of even a very few of the vocalization outbursts perpetuates the behavior. Although removal of reinforcement (known as extinction) ultimately reduces or eliminates excessive vocalization, the behavior may at first become more intense as the cat attempts to get the reward. This is known as an “extinction burst.”

Punishment
Physical punishment should never be utilized in cats. Not only is it ineffective at correcting most behavior problems, it can also lead to fear and anxiety of the owner, people in general or being handled and petted. Although ignoring the vocalization, so that the cat receives no reward for the behavior, is the best solution, in the long run it can be difficult to do.

As soon as the undesirable behavior ceases, reinforce the cat and give it an activity to keep it occupied so that it does not resume the vocalization.

What can be done for cats that vocalize through the night?

For those cats that vocalize through the night, it is first necessary to try and reschedule the cat so that it stays awake and active throughout the daytime and evening. Food, play, affection and attention should be provided during the morning and evening hours, and as many activities as possible must be provided for the cat during the day (cat feeders, activity centers, or perhaps even another pet). Drug therapy may also be useful for a few nights to help get the cat to adapt to the new schedule. Older cats with sensory dysfunction and geriatric cognitive decline may begin to wake more through the night and vocalize more frequently. These cases will need to be dealt with individually depending on the cat’s physical health.

"Under no situation should the owner go to the cat if it vocalizes."

If the cat continues to remain awake through the night, there are two options that might be considered. The first is to lock the cat out of the bedroom by either shutting the bedroom door, or confining it to a room or crate with bedding and a litter box for elimination. If the cat is ignored it may learn to sleep through the night. Alternatively, the cat may learn to keep itself occupied if there are sufficient toys, activities or another cat to play with. Under no situation should the owner go to the cat if it vocalizes (even to try and quiet it down), as this will reward the behavior. If the cat must be allowed access to the bedroom, inattention and punishment devices such as an ultrasonic alarm, compressed air, or a water sprayer, can be used to decrease or eliminate the cat’s desire to vocalize.

Some forms of vocalization are associated with communication, especially with regard to estrus cycles and mating, in adult male and female cats that are not yet neutered. Cats in estrus are particularly vocal at “calling.” Neutering should help to reduce vocalization in these cats.

'Neutered animals still may wish to go outside and roam. If there are other cats in the neighborhood that frequent the home territory, this may encourage your cat to vocalize. Blocking visual access and providing “white noise” may help if you are unable to get the outdoor cats to leave your property.