Spraying is the deposition of small amounts of urine on vertical surfaces. In most cases, the spraying cat will back into the area, the tail may quiver, and with little or no crouching, will urinate. Although much less common, some cats will also mark their territory by leaving small amounts of urine, or occasionally stool, on horizontal surfaces. 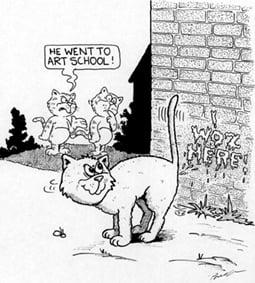 Why do cats “mark” with urine?

Cats mark the locations where they live or where they visit in many ways. Cats will mark with scent glands on their feet, cheeks, face, and tail as well as with urine. Cheek rubbing (bunting) and scratching (with both the odor from the glands in the footpads and the visual mark) are both forms of marking. By depositing an odor, the cat communicates to other animals that it was there long after it has gone. Cats will mark their territory to signal “ownership” and to advertise sexual receptivity and availability. Marking can occur due to the presence of other cats in the vicinity, either outdoors or among cats that live in the same household. Cats will also mark their territory when they feel threatened or stressed. This can occur with a change in household routine, compositions, living arrangements, new living locations and other environmental and social changes. In these cases, the cat may mark new objects brought into the household or the possessions of family members, especially those with which there is the greatest source of conflict or insecurity. Because marking is a method of delineating territory, urine is often found in prominent locations or at entry and exit points to the outdoors such as doors and windows and around the periphery. When outdoors, cats tend to mark around the periphery of their property, on prominent objects on the property, on new objects (e.g., a new tree) introduced into the property, and in locations where other cats have marked.

Which cats are more likely to urine mark?

Both male and female cats can mark with urine. Urine marking is most common in intact (non-neutered) male cats. When an intact male sprays urine, it will have the characteristic “tom cat” odor that is strong and pungent. Castration or neutering will change the odor, and may reduce the cat’s motivation for spraying, but approximately 10% of neutered males and 5% of spayed females will continue to spray. While cats in multiple cat households are often involved in spraying behaviors, cats that are housed singly may spray as well.

"Neutering will decrease the odor of tomcat urine."

I am finding small amounts of urine in multiple locations. What does that mean?

Some cats will mark their territory with small amounts of urine (and on rare occasions, stool) in various locations. These locations can be similar to those for spraying (i.e., near doors, windows, new possessions in the home or favored locations), but may occasionally be found on owner’s clothing or other favored possessions.

However, small amounts of urine deposited outside of the litter box is more commonly due to either a disease of the lower urinary tract or litter box avoidance, which could have many causes. Similarly stool found outside of the litter box can be due to a multitude of medical causes including colitis, constipation and any other condition leading to difficult, more frequent or uncomfortable elimination. As with any other elimination problem, a complete physical examination and laboratory tests are necessary to rule out each physical cause. 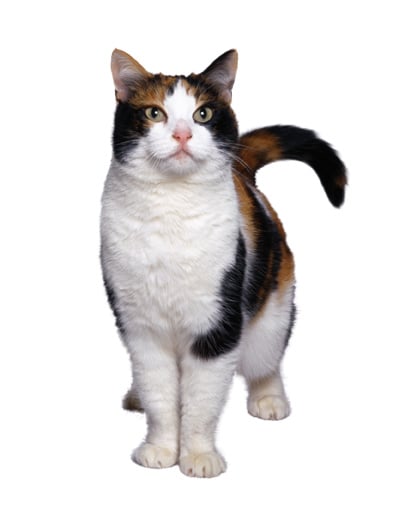 How do I treat a spraying or marking problem?

As with all behavior problems, the history will help determine treatment options. The location of the urine marking, the frequency, duration and number of locations are important. The number of cats both inside and outside of the home should be determined. Changes in environment, social patterns of humans and animals, and additions (people, pets, furniture, renovations) to the home should also be examined.

"The location of the urine marking, the frequency, duration, and number of locations are important."

If the cat is not already neutered, and is not a potential breeder, castration is recommended. A urinalysis should be performed to rule out medical problems. The location of the urine spots should be determined. Is the urine found on walls, 6 to 8 inches up from the floor, or are the small urine spots found in multiple locations?

Treatment is aimed at decreasing the motivation for spraying. It has been shown that spraying may be reduced in some cases by reviewing and improving litter box hygiene. Ideally, the minimum number of litter boxes should equal the number of cats plus one, the litter should be cleaned daily and changed at least once a week, and proper odor neutralizing products should be used on any sprayed sites. In addition any factors that might be causing the cat to avoid the use of its litter should be considered.

If marking appears to be stimulated by cats outside of the home, then the best options are to find a way to deter the cats from coming onto the property or prevent the indoor cat from seeing, smelling, or hearing these cats for remote control devices and booby traps that can be used to deter outdoor cats and to keep indoor cats away from the areas where they are tempted to mark. It may be helpful to house your cat in a room away from windows and doors to the outdoors, or it may be possible to block visual access to windows. When you are home and supervising you can allow your cat limited access to these areas. It also may be necessary to keep windows closed to prevent the inside cat from smelling the cats outside, and to use odor neutralizers on any areas where the outdoor cats have eliminated or sprayed.

If the problem is due to social interactions inside the home, it may be necessary to determine which cats do not get along. Keep these cats in separate parts of the home with their own litter and sleeping areas. Reintroduction of the cats may be possible when they are properly supervised. Allowing the cats together for positive experiences such as feeding, treats and play sessions, helps them to get used to the presence of each other, at least on a limited basis. However, when numbers of cats in a home reach 7 to 10 cats, you will often have spraying and marking problems.

I’ve cleaned up the spot, but the cat keeps returning to spray. What else can I do to reduce the problem?

Because the “purpose” of spraying is to mark an area with urine odor, it is not surprising that, as the odor is cleaned up, the cat wants to refresh the area with more urine. Cleaning alone does little to reduce spraying.

"Cats that mark in one or two particular areas
may cease if the function of the area is changed."

Cats that mark in one or two particular areas may cease if the function of the area is changed. It is unlikely that cats will spray in their feeding, sleeping or scratching areas. It has also been shown that cats that mark an area with cheek glands are less likely to mark in other ways such as with urine. In fact it might be said that cats that use their cheek glands are marking in a more calm, familiar manner while those that urine mark are doing so in a more reactive, anxious manner. A commercial product containing synthetic cheek gland scent (Feliway®) has proven to be an effective way of reducing urine marking in some cats. When sprayed on areas where cats have sprayed urine or on those areas where it can be anticipated that the cat is likely to spray, it may decrease the likelihood of additional spraying in those areas. The use of feline facial pheromone may stimulate cheek gland marking (bunting), rather than urine spraying. It is available as a room diffuser that covers about 700 square feet for cats marking multiple sites or as a spray to be used directly at the area where your cat sprays. It has also been used to calm cats in new environments, including the veterinary hospital and to help familiarize the cat with a new cage or cat carrier.

Where practical, a good compromise for some cats is to allow them one or two areas for marking. This can be done by placing a shower curtain on the vertical surface, tiling the area, or by taking two plastic litter boxes and placing one inside the other to make an L-shape (with the upright surface to catch the marked urine). Another option is to place booby traps in the sprayed areas; but with this option, spraying of another area may then develop.

Are there any drugs that are available to treat this problem?

Over the years many pharmacological means have been tried to control spraying behaviors. The choices have focused on the theory that one of the underlying causes for spraying and marking behaviors is anxiety and territorial competition. For that reason, antidepressants such as clomipramine and fluoxetine have proven to be effective for controlling marking in some cats. Anti-anxiety drugs such as buspirone and benzodiazepines have also been used with varying degrees of success. Dosing, cost, and the potential for side effects will all need to be considered in selecting the most appropriate drug for your cat.