What is cerebellar hypoplasia? 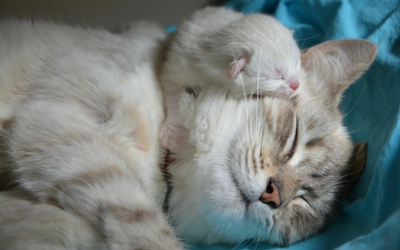 Cerebellar hypoplasia most commonly occurs when a pregnant cat becomes infected with feline panleukopenia virus and passes the infection to her unborn kittens. The panleukopenia virus preferentially attacks rapidly dividing cells. During the perinatal period (i.e., in the last weeks of pregnancy and the first weeks after birth) the cerebellum is undergoing rapid growth and development, making it vulnerable to attack by the virus. The condition may only affect one kitten in a litter or may involve all littermates.

Since the cerebellum is responsible for purposeful movement and coordination, the symptoms of this condition may not become apparent until the kitten starts to try and stand or walk on its own. The severity of the symptoms depends on how much of the cerebellum was affected and at what stage in its development the infection occurred.

Are there any other causes of this condition?

It is possible that a kitten could develop cerebellar hypoplasia if its mother is severely malnourished during her pregnancy or if the kitten suffers a physical trauma to its brain during the period of time when the cerebellum is developing. Other inflammatory diseases of the brain such as toxoplasmosis infection may cause similar symptoms. However, the most common cause of this condition by far is infection with panleukopenia virus.

How is this condition diagnosed?

Cerebellar hypoplasia cannot be detected using routine laboratory tests. In some cases, an MRI (magnetic resonance imaging) may show that the kitten has a smaller than normal cerebellum.

Since the condition is caused by a lack of development of the brain, there is no treatment.

How can this condition be prevented?

This disease can be prevented by vaccination of female cats against panleukopenia prior to pregnancy.

Kittens with cerebellar hypoplasia are not infectious to other kittens or cats, are not in any pain, and will learn to adapt to their disability over time. They can safely be spayed or neutered, but must be kept indoors as they are prone to losing their balance and could easily be injured or attacked if they go outdoors. If their symptoms are pronounced, they may require special modifications in their home environment, including dishes that are raised off the floor for easier access.

Although some kittens may be more prone to minor injuries associated with falls, all of them are able to have a normal life expectancy provided they are given some extra tender loving care.