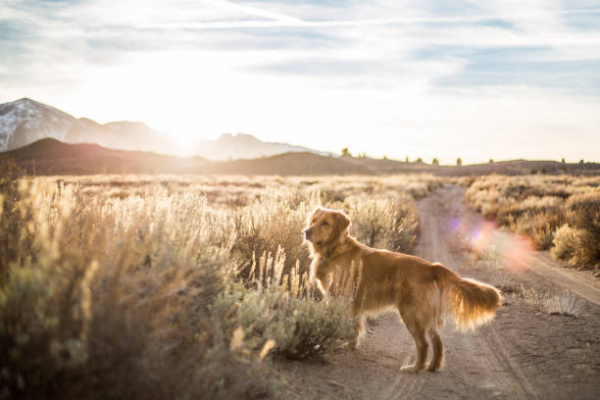 Another name for the disease called coccidioidomycosis is “valley fever”. This is a fungal disease caused by the soil fungus Coccidioides immitis. It is primarily found in the southwestern United States and northern Mexico, as well as parts of Central and South America. The distribution of the organism is changing, however, with cases reported as far north as Washington state.

The organism grows down several inches into the soil and can survive the high temperatures of the desert regions. During the rainy season, Coccidioides immitis can return to the surface and sporulate, allowing infective spores to be spread by the wind.

The early signs of coccidioidomycosis include fever, lethargy, lack of appetite, coughing, and joint pain. The dog may develop lameness and/or weakness, as well as back and neck pain. In severe cases, if the organism spreads throughout the body, becoming systemic, the dog may develop seizures or blindness due to the central nervous systems becoming involved.

Most dogs who develop coccidioidomycosis are young, as this is the demographic that tends to be more active outdoors. Dogs who dig in the dirt or who spend time outdoors following a dust storm may also be at greater risk for exposure.

How can my dog get coccidioidomycosis?

Coccidioidomycosis occurs after inhalation of the fungal spores. In a susceptible dog, inhalation of fewer than 10 spores can cause illness.

How is coccidioidomycosis diagnosed?

Diagnosis of coccidioidomycosis in dogs can be challenging because the symptoms are not specific for this disease. The first wave of symptoms typically includes fever, coughing, and difficulty breathing. If the disease spreads to other parts of the body, the symptoms will depend on the tissues and organs that are involved. The dog may exhibit lameness, joint swelling, or swelling in the bones. The lymph nodes may become enlarged, there may be nervous system dysfunction, and eyes can become inflamed, causing vision problems. Finally, the skin may develop draining tracts or sores that will not heal. X-rays of the chest may assist in the diagnosis.

“The most common way to diagnose is by testing for antibodies to the organism.”

While coccidioidomycosis can be definitively diagnosed via biopsy, the most common way it is diagnosed is by testing for antibodies to the organism.

How is coccidioidomycosis treated?

Most dogs with coccidioidomycosis are treated at home rather than in hospital. Vigorous activity should be restricted until the dog begins to feel more normal and comfortable. This is a very serious illness requiring long-term treatment. For many dogs, this means treatment for at least one year. There are several oral anti-fungal medications your veterinarian may choose from to treat this disease.

What sort of follow-up is required for dogs who are being treated for coccidioidomycosis?

Dogs being treated for coccidioidomycosis should have repeated measurement of their antibodies against this organism. Levels are typically measured every 3-4 months and treated until levels are normal. Regular monitoring of kidney and liver function may also be recommended. If needed, cough suppressants may be prescribed if severe coughing develops.

Unfortunately, coccidioidomycosis carries with it a guarded to grave prognosis, and while dogs may improve during medical therapy, relapses are common. Overall recovery from coccidioidomycosis has been reported at between 60% and 90%.

Prognosis is, unfortunately, worse in dogs with central nervous system or multiple bone involvement. Life-long therapy may be required.

Why don’t all dogs in endemic areas have coccidioidomycosis?

Interestingly enough, despite the presence of Coccidioides immitis in the soil (and soil is everywhere), coccidioidomycosis is not very common, even in the endemic areas of the U.S. Asymptomatic infections may occur, in which dogs are exposed, but develop immunity without experiencing the signs of full-blown disease.