Cuterebra or 'Warbles' in Dogs 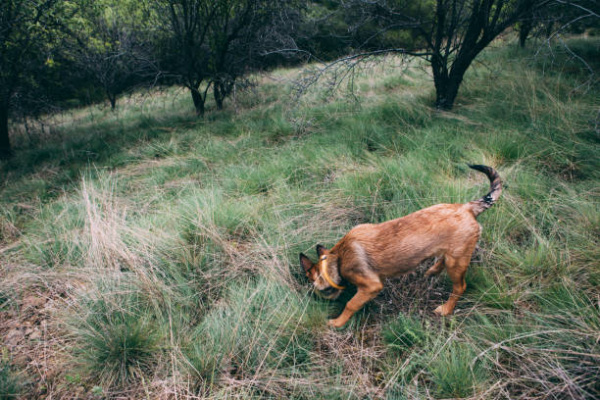 Cuterebra is the genus or scientific family name of the North American bot fly. Twenty-six species of Cuterebra are known to occur in the U.S. and Canada. Botflies are also found in Mexico and the neotropical region. Cuterebra larvae develop within the tissues of certain animal hosts, and during this phase of their life cycle, they are commonly referred to as 'warbles'.

What is the cuterebra or botfly life cycle?

The adult botfly deposits its eggs in or near the openings of rodent and rabbit burrows. After hatching, the botfly larvae, which typically infect rodents and rabbits, enter the host's body through an opening such as the nose, mouth, or a skin wound. After several days, the botfly larvae migrate to the tissues beneath the skin, where they encyst and continue their development.

Different species of Cuterebra flies have evolved to migrate to specific anatomical locations in different hosts. For example, Cuterebra horripilum tends to seek out the throat region in cottontail rabbits, and C. fontinella commonly selects the abdominal or caudal region in the deer mouse. The larvae form a cyst beneath the skin of the host and complete their development. Larval development within the host may last from 19 to 38 days in small rodents and from 55 to 60 days in jackrabbits. After leaving the host, the larva develops into a pupa (immobile cocoon-like stage) in loose soil, debris or forest detritus. The pupation period may be as long as 7 to 11 months or as short as 28 days, depending on the environmental temperature and botfly species. Adult Cuterebra flies mate within a few days after emergence and they seldom live more than two weeks.

How did my dog get warbles?

Dogs are accidental hosts of Cuterebra larvae. They are most commonly infected when they are hunting rodents or rabbits and encounter the botfly larvae near the entryway to a rodent's burrow. Most cases of warbles in dogs occur around the head and neck.

How do I know if my dog has warbles?

The early stages of Cuterebra infection or warbles are rarely evident from external inspection of the skin. Most cases do not become noticeable until the larva enlarges and becomes a noticeable swelling that is seen or felt beneath the skin. A small "breathing" hole is often visible in the skin over the warble. The hole enlarges when the warble has fully matured and is about to leave the host. Sometimes, nothing abnormal is noticed until after the larva has left the host and the empty cyst becomes infected or develops into an abscess in the dog's skin.

In many cases, the secondary bacterial infection that develops in the empty cyst causes more damage to the host than the primary attack by the Cuterebra warbles. Many dogs will develop a deep abscess or skin infection at the infection site after the warble has left the skin.

Rarely the Cuterebra larvae migrate away from the skin, causing inflammation and damage where they travel. Affected areas can include the eyes and surrounding tissues, the brain, the nose, larynx and trachea. They can even cause widespread disease such as Sudden Inflammatory Response Syndrome (SIRS) and Disseminated Intravascular Coagulation (DIC).

If the condition is noticed after the warble has left the skin, the infected area is cleaned and debrided and antibiotics prescribed.

When only a few warbles are involved, the prognosis is very good for complete resolution and few, if any, permanent side effects occur. The prognosis is worse if a dog is infected with multiple warbles or if a warble migrates through or develops near a nerve or other sensitive tissue or organ.

How can I prevent my dog from getting warbles?

"Cuterebra is a common fly in North America."

Cuterebra is a common fly in North America. The best prevention is to keep your dog from hunting rodents. When this is impossible and if you live in an area with numerous rodents, rabbits or other small mammals, you should closely inspect your dog regularly for any signs of warbles. The earlier a warble is removed, the less likely the chance of permanent or serious damage to your dog.