What is the difference between diabetes mellitus and diabetes insipidus?

There are two types of diabetes in dogs. Diabetes mellitus (DM) is also called sugar diabetes and results from a disruption of pancreas function and abnormal regulation of blood sugar. The term, meaning 'sweetened with honey', originated from the fact that the urine of these patients was 'sweet' due to high amounts of sugar excreted from the body.

Diabetes insipidus (DI) gets its name from the fact that the urine of these patients is dilute enough to be 'tasteless' or 'insipid'. Diabetes insipidus (DI) is rare in dogs, and is characterized by excessive thirst/drinking and the production of enormous volumes of extremely dilute urine. Some dogs may produce so much urine that they become incontinent (incapable of controlling their urine outflow). The irony of this disease is that despite drinking large volumes of water, the dog can become dehydrated from urinating so much.

My dog is drinking and urinating a lot. Is DI the likely cause?

There are many causes of increased thirst (polydipsia) and increased urine production (polyuria), including diabetes insipidus, diabetes mellitus, liver problems, and kidney disease, to name a few. It is essential that several diagnostic tests be performed to determine the cause of your dog's problem.

How is DI diagnosed?

Part of diagnosing DI involves first eliminating other potential explanations for increased drinking and increased urinating. Typical laboratory testing will include a complete blood count (CBC), blood chemistry panel to evaluate liver and kidney parameters and blood sugar, and a urinalysis. The urine concentration (specific gravity) is quite low in these dogs. A more advanced test involves calculating normal daily water intake, measuring how much the dog is truly drinking in 24 hours, depriving him of a portion of the volume he is consuming (closer to the normal volume), and then measuring the urine concentration to assess whether or not the urine can be concentrated. This is called a water deprivation test.

Part of kidney function is to continually filter the blood that passes through them and to maintain the balance of the body's water by excreting or reabsorbing fluid as required.

Efficient reabsorption requires an adequate level of a hormone called antidiuretic hormone (ADH), or vasopressin, which is produced by the pituitary gland at the base of the brain, and which has its effects in the kidneys. DI may be caused by inadequate production of ADH - this is called central DI (CDI) - or by kidney resistance to the hormone - this is called nephrogenic DI (NDI). 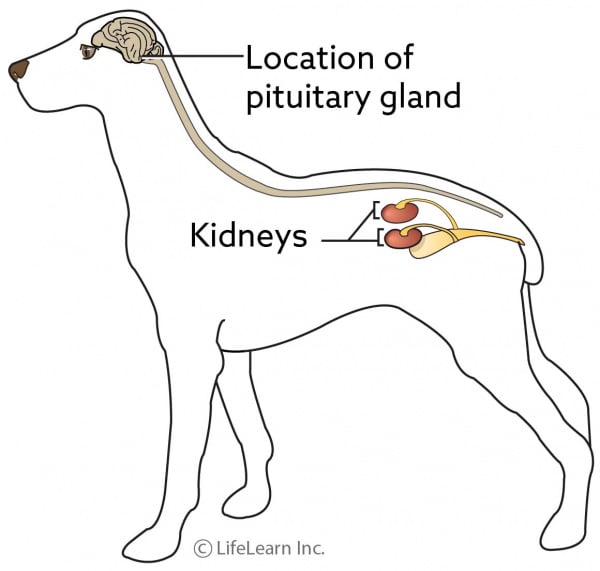 Inadequate production of ADH, as in CDI, can be caused by a birth defect, brain trauma, a tumor in the pituitary gland, or there may be no specific cause found (idiopathic).

Lack of kidney response to ADH, as in NDI, can result from a birth defect, an adverse reaction to certain medications, or secondary to certain diseases (like severe infection, metabolic disorders, or advancing kidney disease).

How is DI treated?

CDI is treated using a synthetic formulation of ADH called desmopressin (also known as DDAVP) that is applied either as eye drops or by injection under the skin. NDI is treated using oral hydrochlorothiazide and a low-salt diet. The treatment depends upon the definitive diagnosis. The underlying disease leading to NDI should be determined to be able to provide more specific treatment.

Can DI be cured?

Diabetes insipidus cannot be cured except in the rare patient whose DI is caused by trauma; however, it can usually be successfully controlled. Without treatment, this disease results in dehydration leading to stupor, coma, and death.