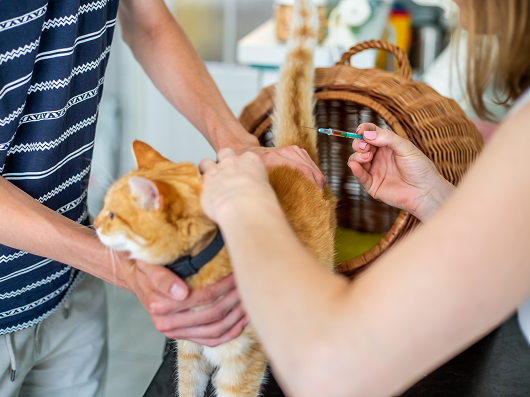 What is feline diabetes?

Diabetes is a complex disease involving a hormone called insulin. The body is like a well-tuned machine that needs fuel. The fuel for a cat is food that contains fats, carbohydrates, and proteins. This fuel needs to be broken down into smaller parts that the body can utilize. One of these usable fuel components is glucose. Without glucose, the body’s engine stalls. Glucose must enter the body’s individual cells to keep the engine running. Insulin regulates the flow of glucose from the bloodstream into the cells where it is needed to sustain life.

When there is not enough insulin produced by the pancreas, or the cat does not use it effectively, glucose cannot enter the cells and high levels of glucose build up in the bloodstream. This condition is called diabetes.

What are the signs of diabetes?

The common signs of diabetes include increases in appetite, water consumption, and urination, along with weight loss. If untreated, diabetes results in vomiting, dehydration, lethargy, coma, vision loss, labored breathing, and even death.

How are cats with diabetes treated?

Cats with diabetes need constant attention. They should eat a low carbohydrate diet to reduce the amount of glucose in the body. Even so, most cats require insulin injections twice daily to keep blood glucose in check. These injections are administered under the skin in rotating sites, preferably at the same times each day. In addition to extensive home care, diabetic cats may need frequent visits to the veterinary hospital (if not doing home testing) for blood monitoring, urine tests, and physical exams.

What is diabetic remission?

The primary goal of treating diabetes is to regulate blood glucose quickly and reach a point where the cat no longer needs insulin therapy. Diabetic remission occurs when a cat maintains a normal glucose level for more than four weeks without insulin injections or oral glucose regulating medications. Not all cats go into remission, but those that do may stay that way for months or years.

There are varying reported rates of remission depending on various factors. The key factors in achieving remission are the quick institution of insulin therapy post-diagnosis and strict adherence to a low-carbohydrate diet. Frequent monitoring with appropriate adjustments of insulin dosage increases the odds of remission.

Considering the effort required to care for a cat with diabetes, remission, even short-term, is a welcome relief for both cat and cat owner.

What other factors impact remission?

Diet
Since canned food has fewer carbohydrates than dry food, moist diets are recommended, but low carbohydrate content is not the only dietary requirement of diabetic cats. Diabetic cats may suffer from other chronic diseases that may need to be prioritized while insulin is adjusted to control diabetes. A proper diet can result in better blood glucose control and reduce the amount of daily insulin needed.

"A proper diet can result in better blood glucose control and reduce the amount of daily insulin needed."

Insulin and other glucose regulators
The goal is to lower blood glucose levels without going too low (hypoglycemia). Calculated insulin doses paired with a consistently low-carbohydrate diet (no cheating) help balance blood glucose. Cats can enter remission while treated with any type of insulin; however, many veterinarians find that cats have better glycemic control with long-acting products. A higher rate of remission has been reported with glargine insulin (Lantus®). Detemir (Levemir®) is synthetic insulin that has a long duration of activity. Both insulin products have been shown to help promote remission in cats by achieving quick glucose control. Oral anti-hyperglycemic drugs are rarely used in cats and are not used as a sole therapy.

Timing of glucose regulation and remission
Unfortunately, the longer a cat is diabetic, the less likely remission will occur. Achieving glucose control quickly increases the likelihood of remission. Cats that have diabetes for more than six months are less likely to go into remission. This is because the increased blood glucose injures cells in the pancreas that produce insulin, preventing the cat’s body from ever controlling glucose without an external source of insulin.

Body condition score
Overweight cats are less sensitive to the effects of insulin, so cats with a healthy body condition score (5 out of 9) respond better to diabetes therapy. Obese diabetic cats should be fed a diet that promotes a 1-2% loss of body weight per week. This slow, regulated weight reduction improves insulin sensitivity, may reduce the amount of insulin required, and increases the probability of long-term remission. (See the “Body Condition Scores” handout for more information.)

"Overweight cats are less sensitive to the effects of insulin..."

Other factors
Cats that require a lower insulin dose to control glucose levels are more likely to enter remission, as are cats that become diabetic at an older age.

How will I know if my cat is entering remission?

As cats go into remission, they will not require insulin as much and, without proper dose adjustments, may experience hypoglycemic episodes. Signs of hypoglycemia include lethargy, loss of appetite, weakness, low body temperature, and tremors or seizures. If remission is suspected, your veterinarian will advise you on how your cat's glucose levels should be monitored and recommend proper insulin dosing to reduce the risk for hypoglycemia.

If your cat is showing signs of hypoglycemia, apply some corn syrup to the gums and contact your veterinarian immediately.

What is the bottom line with diabetic remission in cats?

Staying in remission is likely if your cat remains generally healthy and maintains an optimal body condition score while eating a low-carbohydrate diet. Remission can happen! Remember that diabetes is still a disease that is more likely to be controlled than cured.