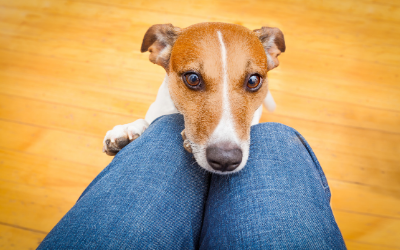 Dog owners often consider their pets to be part of the family, and since both dogs and humans have similar social systems among their own species, they meld together into a single family quite well. Long-term bonds develop between family members as they spend time together, live in close proximity, and share emotional experiences.

Close relationships are founded on good communication. Spoken communication is unique to each species; however, non-verbal communication such as facial expressions and body language, are often shared. This means that the canine members of our family “get us.”

How did canine-human communication develop?

Many years ago, the status of the canine-human relationship changed. No longer were dogs valued only for the work they could do herding livestock or protecting the home. With the advent of processed dog food and improved veterinary care, dogs moved from outdoors to indoors and were socialized inside the home. In their new environment, dogs learned to decipher human non-verbal language. They interpreted human moods, anticipated human needs, and were rewarded with food, shelter, and lots of love. This positive reinforcement stimulated increased canine efforts to understand their humans.

Humans are the center of the canine world. Because they depend on us for the basics of life, food and shelter, they monitor our every move. They know when we are rushed or relaxed, happy or mad, focused or available for play time. They are wise creatures that realize our moods affect them. A good mood may mean an extra snuggle while a bad mood may mean that it is time to hide under the bed.

“They know when we are rushed or relaxed, happy or mad, focused or available for play time.”

Dogs do not have to understand every spoken word to get the gist of a conversation, especially since only 10% of what humans communicate is actually verbal. Non-verbal posture, gestures, body carriage, and facial expressions communicate 90% of what we have to say, so our dogs have learned to monitor these physical actions very closely.

How do dogs recognize facial expressions?

These close canine observations result in a form of communication. As most pet owners acknowledge, our dogs recognize our facial expressions. A frown tells a pup something is amiss and a smile makes his tail wag. Now, there is scientific evidence to validate our observations.

Dogs are so focused on our faces that they respond differently when they cannot see us. In another experiment, a dog was placed alone in a room. His owner and a stranger walked in via separate doors, crossed in front of each other, then exited through different doors. Dogs focused longer on their owners than the strangers. When left alone again, the dogs waited by the door where their owner exited. The experiment was repeated with the faces of both the owner and stranger covered. The dogs were less likely to focus on their owner or wait by the door for them, illustrating the importance of facial recognition to dogs.

Can I test this with my own dog?

Try an experiment of your own. Sit facing your dog and break out a huge smile. Your dog will probably relax his ears and wag his tail. Next make a frown and furrow your brow. Your dog will likely respond to this stern look by backing up a bit and looking guilty. Your dog, like generations of dogs before her, has developed the ability to recognize and respond to changes in your facial expressions.