What is the impact of canine aggression toward a child? 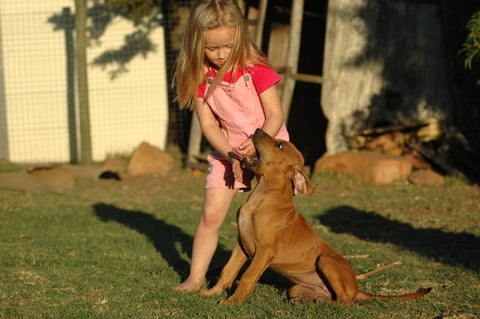 Dogs are a wonderful part of many children’s lives. However, fearful or aggressive dogs pose an enormous risk to a child’s safety. Children can behave erratically, move in unpredictable ways and make a host of loud and sudden noises. Children are often very interested in dogs and may want to touch them even when they are showing signs of fear or aggression. Children are at greater risk because they are at the same level as the dogs due to their height and because they are often interested in similar things (toys, food). Children may behave inappropriately towards dogs by pulling their tails, hair or ears. Most dog aggression towards children is fear based, though many dogs will also show aspects of food, possessive and territorial aggression as well. According to the CDC, 800,000 people seek medical attention for dog bites each year, half of which are children. Dog bites are most prevalent among children ages 5 to 9 and are more prevalent among boys. Children under 4 years old are most likely bitten in the head or neck due to their height. As children grow older, extremities become the more likely target. Children are most likely bitten by dogs they know; children under 6 are often bitten in circumstances involving food or possessions, while older children when approaching or invading a dog’s territory. This risk increases when living in multiple dog households. Family pets inflict two thirds of dog bites to children. In a retrospective study by Dr. Ilana Reisner, 66% of dogs had never previously bitten a child and 19% had not bitten a human. This shows that any dog may bite and biting may be a normal canine response to perceived threatening situations. Dogs and children do not know how to behave around each other instinctively. Steps must be taken to teach both dogs and children how to interact with each other safely.

How can I prevent my dog from being aggressive toward children?

The best way to address aggression toward children is to prevent it. During their socialization period (6 to 14 weeks of age), puppies are highly curious and impressionable. Making sure that puppies have numerous positive encounters with children of all ages during this period can help them cultivate a positive attitude towards children later on in life. Desensitizing them to being touched around the face and head and even tugged on gently will prepare them for the ways that they are touched by children. After 14 weeks of age, puppies become considerably more apprehensive of their surroundings and react more fearfully to threatening stimuli. It is important to avoid negative experiences during this time as much as possible. Do not use punishment techniques to make sure that dogs do not become fearful. Striking a dog can specifically cause a fear of being touched and may put children at a greater risk. Keep in mind that interactions with children outside of the home are not necessarily protective against fear and anxiety when later children occupy the home with the dog.

When choosing a dog for a family with children, take several factors into account. Consider breed and family history as well as the dog’s history of behavior around children. Try to spend time with the dog before adopting the dog into a house with children. Look for signs of fear, apprehension, or avoidance in the dog or in the children. 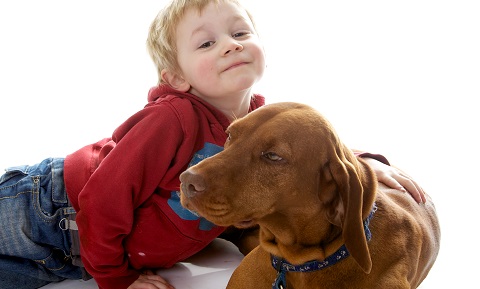 How should dogs be introduced to children?

What can be done if my dog is already showing some aggression toward children?

Keeping children safe throughout this process is the primary concern. Once a dog has shown any signs of fear or aggression around children, you cannot assume that he/she will be safe to leave with children. Even if the dog has had several positive encounters with children, an adult should closely monitor all interactions. Sometimes an individual dog will never be safe around children.

Desensitization should take place in a slow, step-wise fashion. The child’s safety must be preserved during this process. The goal is to expose the dog to the child in a comfortable setting and at the distance where the dog is showing no signs of fear. Watch for subtle signs of canine fear or stress: yawning, lip licking, trembling, crouching, ears down, tail tucked. Signs of aggression and potential for escalation to a bite include barking, hair standing on end, snarling, growling, or snapping. Give the dog basic commands (e.g., sit, down, shake) and reward these tasks with favored treats. Over several successive sessions, the dog might be able to move closer to the child. If the dog becomes agitated, fearful, tense, disobedient, or refuses treats, then back up to a distance where the dog is more comfortable. Once the dog is accustomed to the presence of the child/children, the children can practice giving the dog verbal commands as well. This process can be greatly facilitated by teaching relax and settle commands to help the dog remain calm. A gentle leader head halter can also be an invaluable tool during this process.

Classical conditioning is another excellent tool for helping dogs become more comfortable around children. The goal is to give the dog’s favorite treats whenever children come near. In this way, the dog will learn to associate children with getting tasty treats. When the dog is well acclimated, children can offer treats to the dogs whenever they approach. Remember to keep the child’s safety in mind. Start by exposing the dog to a child that is being carried by an adult. Only allow the child to interact directly with the dog once the dog is showing no signs of fear or aggression and is looking excited about the encounter.

How can children be taught to safely interact with dogs?

Children should be taught proper conduct around dogs starting as early as 18 months of age. Children should be positively rewarded for good interaction and immediately stopped if they are acting inappropriately. All interactions between children and unfamiliar, fearful or aggressive dogs should be monitored.

What should children be taught NOT to do?

What should children do around unfamiliar dogs?

What should children do around familiar dogs?

What should children do when confronted by an aggressive dog?

What is the takehome message?

Dog bites are serious: dog bites to children are particularly disturbing. We expect our dogs to act like Lassie and our children to enjoy a carefree relationship with dogs. The CDC reports that injury rates for bites were the highest among children age 5 to 9. Evidence also suggests boys are more likely to be bitten than girls. Children under the age of 4 were most likely to sustain bites to the face or neck. More children are bitten by a familiar dog than a strange dog. We must do a better job of preparing our children how to act around dogs. We must also train and socialize our dogs to expect the unpredictable things children do.