Why would my dog fight with dogs he has never met?

Generally, most well socialized dogs strive to avoid physical or aggressive confrontation. Dogs use body language to communicate desire to interact or desire to avoid an aggressive encounter. Like people, not all dogs are natural or skilled communicators with members of their ow 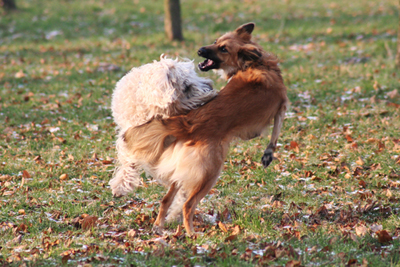 "The diagnosis is based on the body postures and reaction of the dog when faced with another dog."

Aggression between unfamiliar dogs can be due to fear, poor communication, defensive, possessive behavior over resources (including perhaps family members or other pets) or territorial behavior over territory or owner. Aggression between dogs can result in injury to dogs and/or to the people trying to separate them. The behavior can consist of growling, snarling, barking, lunging, snapping, and biting (see Canine Communication – Interpreting Dog Language).

How do I recognize fear-based or defensive aggression toward unfamiliar dogs?

This aggression is very common in aggressive encounters with other dogs.

The diagnosis is based on the body postures and reaction of the dog when faced with another dog. However, these postures and reactions may change over time depending on the consequences of the interaction. For example, if the dog learns that the aggressive display stops encounters, the behavior tends to increase in intensity and the body postures may become more confident. Therefore, it is important not only to observe the expressions and posturing at the present time, but also those from the initial few encounters. The fearful dog will often have the tail tucked, ears back and may lean against the owner or attempt to get behind them. They may be barking at the approaching dog, while lunging and backing up at the same time. Often the dog is avoiding eye contact. This behavior may begin due to previous aggressive attacks from which the dog could not escape and sustained injury. Some dogs who have had limited or insufficient early socialization with other dogs, may lack the social skills required to interact playfully and comfortably. When multiple dogs are present, if one dog is highly aroused and unable to be calmed or controlled by the owners this dog may incite the second dog to become fearful or defensive, which ultimately leads to aggressive displays from both dogs.

Often the owner plays a role in how the dog behaves. For example, the owner may signal tension via leash tightening responses or even “corrections” that signal the dog that the approaching dog or at least the situation is of concern. In addition, if the owner is frustrated, anxious or worried about the dog’s behavior, then the dog is likely to notice the owner’s reactions and associate them with the approach of the other dog (rather than their own behaviors). This may result in a dog becoming even more defensive and aggressive. An owner that tries to calm their aggressive dog may serve to reinforce the actions the dog is engaging in at the time. Conversely, if the owner threatens or punishes the dog in an attempt to stop the behavior, this will only serve to heighten the dog’s fear and anxiety in relationship to the stimulus. Good control can help to calm the dog; owners who have their dogs restrained on a leash (especially with a choke or pinch collar) and have poor control often will have highly defensive dogs. Dogs that are restrained on a leash or tied up The diagnosis is based on the body postures and reaction of the dog when faced with another dog.
are more likely to display aggression when frightened, because they cannot escape.

How do I recognize aggression resulting from poor communication between unfamiliar dogs?

This aggression can be elicited by assertive gestures or postures from either dog. These can include placing head or feet on the back of the 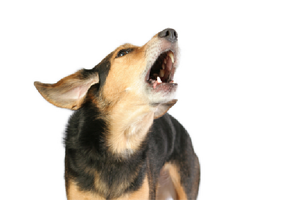 other dog or other dominant body postures such as eye contact, and high tail and stiff-legged approach. If one of the two dogs does not show appropriate appeasing or submissive responses toward the other dog, then aggression might ensue. Owners may inadvertently heighten the anxiety and arousal by how they respond; pulling and tightening or correction with the leash or when they use threats or disciplinary techniques. These may signal to the dog that the impending approach is problematic. Leash restriction also does not allow the dog to react with a complete rate and range of responses, including body postures, approach and withdrawal.

Some dogs may be uncertain how to communicate properly with other dogs. This may occur because of insufficient or inadequate socialization with other dogs or dogs of different types and breeds, or because of previous unpleasant experiences with other dogs, adding fear or anxiety components to the problem. Problems may escalate quickly in dogs that are anxious or fearful, and in dogs that lack good social skills with other dogs. For example, if assertive or dominant expressions and gestures, or highly excitable and overreactive displays frighten the other dog, aggression by one or both dogs may occur. Conversely, the signaling dog may not be reading the signals of the second dog and might increase the intensity of its displays, perhaps to the point of aggression, even when the other dog shows deferential behavior. This can lead to the second dog becoming defensively aggressive. Good communication within a social group of familiar dogs will result in a minimum of fighting, through actions, posturing, and visual and vocal signals, this does not necessarily work when unfamiliar dogs are meeting and greeting for the first time. In addition, changing circumstances and environments on walks, behavioral genetics, lack of sufficient socialization to other dogs, previous experience and the wide array of differences in physical appearance and behavior between breeds and individuals may compound the problem and increase the uncertainty and anxiety. Some extremely bold or assertive dogs will fight rather than back down when challenged. Assertive dogs may be overassertive and/or overprotective if the owners do not have good verbal and physical control. If the dog pulls the owners along during walks, it will take the lead in reacting to stimuli that it meets along the way, rather than looking to the owner for direction and reassurance. Other dogs may be in a state of conflict, in that they are friendly or socially attracted to the other dog, but uncertain or fearful of the possible outcome. These situations of conflict or uncertainty (competing emotions) can result in aggression (see Canine Communication – Interpreting Dog Language).

This form of aggression is primarily exhibited when unfamiliar dogs are on the resident dog’s property, or what the aggressor considers his territory. Some dogs get highly aroused at the sight of other dogs on their territory and may jump fences, or go through windows or doors to get to the intruder (see Aggression – Territorial).

How do I recognize possessive aggression?

Although aggression can have multiple components (fear, learning), possessive aggression is primarily exhibited when a dog displays aggression when approached when in possession of a particular resource. This might be a type of food or treat, a favored toy, a novel or stolen object, or when accompanied or in the vicinity of one or more particular family member. The problem arises when a dog is particularly covetous of the resource, even if the other dog defers, or when both dogs are sufficiently motivated to use physical confrontation to obtain or hold on to the resource. In some cases, the dog may show little or no evidence of aggression except when the particular resource is present, in which case the problem might be prevented if the resources (toys, food) are removed during social interactions with other dogs (see Aggression – Possessive – Objects and Toys and Aggression – Possessive – Food Bowl).

Learning and conditioning aggravate most forms of inter-dog aggression. Should threats or aggression result in the retreat (or removal by the owner) of the other dog, the behavior has been successful. If the owner tries to calm the aggressive dog, this may only serve to reward the aggressive responses. One of the most common mistakes is to punish the dog that is showing aggression toward other dogs.

"If the owners cannot successfully control the dog and resolve the situation without heightening the dog’s anxiety or increasing its fear, the problem will escalate with each subsequent exposure."

This usually serves to heighten the dog's arousal, and teaches the dog that the stimulus (other dog) is indeed associated with unpleasant consequences. Many owners, in an attempt to gain more control, then increase the level or type of punishment (e.g., prong or electronic shock collars), which further heighten the dog's arousal and in some cases may lead to retaliation and defensive aggression toward the owners. Unfortunately, owners may be confused by the fact that at least initially these products may suppress the undesirable behavior. However, this does not mean that these techniques are working since even if the response has been inhibited, the negative association might become more intense. If the dog-to-dog interaction results in pain or injury to one or both dogs, the dogs will quickly learn to become more fearful and aggressive at future meetings. In short, if the owners cannot successfully control the dog and resolve the situation without heightening the dog’s anxiety or increasing its fear, the problem will escalate with each subsequent exposure.

How can I prevent my dog from becoming aggressive with other dogs?

Prevention starts with puppy training and socialization. Early and frequent association with other dogs will enable your pet to learn proper interactions and reactions to other dogs. This can be very helpful in prevention of aggression to other dogs. Socialization must occur with other dogs that are calm and able to communicate well with other dogs, and should progress to a variety of shapes, sizes and personalities of dogs. Ear carriage, eye contact, tail position and even body postures may be difficult to “read” if there are significant size disparities, or if one or both of the dogs has cropped ears, hair that covers the eyes or a docked tail (see Socialization and Fear Prevention). If the owners cannot successfully control the dog and resolve the situation without heightening the dog’s anxiety or increasing its fear, the problem will escalate with each subsequent exposure. 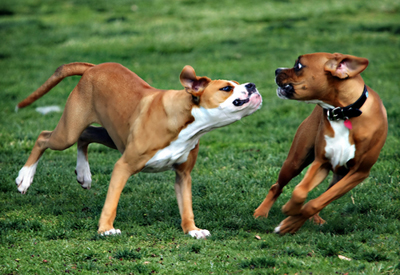 You must have good control of your dog. This means that your dog will take contextual cues from you, and may be calmer, less anxious and less likely to be protective in the presence of new stimuli. Moreover, the dog should reliably respond to commands to “sit,” “stay,” and “quiet” so that appropriate responses can be reinforced rather than undesirable responses being punished (see Reinforcement and Rewards and Teaching Calm – Settle and Relaxation Training). If necessary, the dog may need a head halter to give you additional control (see Training Products – Head Halter Training and Training Products – Head Halter Training – Synopsis). When in situations where the dog may encounter other dogs, a leash is necessary.

For territorial behaviors, what is most important is to prevent the dog from engaging in prolonged and out of control aggressive displays in both the home and yard. Aggressive displays include barking, lunging, fence running, jumping on doors, windows and fences. These types of behaviors should be discouraged, or prevented by blocking windows if needed and going outside with the dog to prevent them. Using a leash and head collar both indoors and outside will increase control and allow you to interrupt aggressive responses and redirect the dog to more appropriate ones. One important component is teaching your dog a “quiet” command for barking (see Barking and Training “Quiet,” Barking and Training “Quiet” – Synopsis, and Aggression – Unfamiliar Dogs – Treatment).