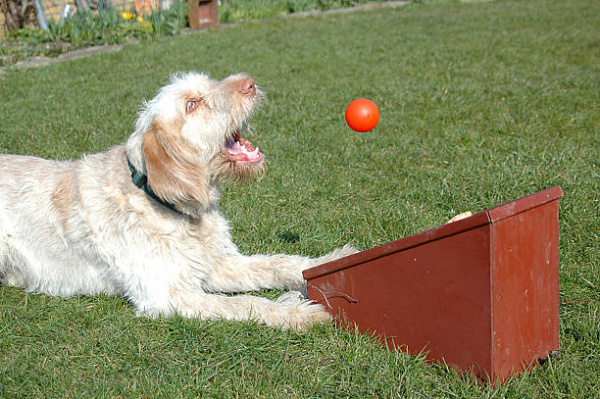 On your marks, get set, go! Dogs running, jumping, catching balls, making razor sharp turns, and racing to a finish line—that is the canine sport of flyball.

This relatively new sport started in the late 1960s in Southern California. Creative dog trainers had dogs jump over hurdles, catch tennis balls, and run to a finish line. Future renditions added a mechanized box that launched tennis balls into the air. Herbert Wagner developed the first flyball box and presented it to Johnny Carson on The Tonight Show. Is it any wonder that this fast-paced sport quickly became a sensation?

Flyball exploded in popularity and eventually became an organized, sanctioned sporting event. In the early 1980s, the North American Flyball Association (NAFA) was formed as the worldwide authority on the game.

Flyball is a relay race with four dogs on a team. A flyball course consists of a starting/finish line, four hurdles, and a ball-releasing apparatus. Individual dogs run from the starting line, jump over the four hurdles, press a spring-loaded pad on a box that launches a tennis ball, catch the ball, carry it in their mouths as they turn, jump back over the same four hurdles in reverse order, and race to the finish line. At the finish line, the next dog on the relay team is waiting to take their turn. Each dog must return their ball and cross the finish line before the next dog in the relay can start their turn. The handler is the human participant who coaches and encourages the dogs on the team.

Since flyball is an official canine competitive sport, it has rules and regulations. The format of the course is set out with precision to ensure consistency at each event. The starting line is located six feet from the first hurdle. The four hurdles are each placed 10 feet apart. The flyball box is 15 feet from the last hurdle, making the entire course 51 feet long. The only varying condition on this closely regulated course is the height of the hurdles.

Since a relay team can be made up of dogs of various breeds and sizes, the hurdle height is determined by the smallest dog on a team. According to NAFA rules, the hurdles should be five inches below the shoulder (withers) height of the smallest team member (called the height dog) but must be between 7-14 inches tall. This rule makes small dogs sought-after team members! With one small dog on the team, the other three dogs get to jump over lower hurdles. The only drawback is that smaller dogs have more difficulty triggering the ball box. While the Border Collie of the team may only have to tamp the trigger mechanism with their foot, the Miniature Poodle may have to jump on the box with the full weight of their tiny body.

What strategies are used in flyball?

The goal is to have all four dogs on a relay team complete the course in the fastest possible time. Time is impacted by several factors. First, the dog must leave the starting line swiftly, clear the hurdles cleanly, release the ball quickly, catch the ball accurately, turn around tightly, re-clear the hurdles, and race across the finish line where the next teammate perches ready to dash off. The dogs need to pass nose-to-nose as they take turns, but the waiting dog cannot leave the starting line a second too early. Penalties are incurred if a dog crosses the starting line prematurely.

Clearing the hurdles is important because stumbles cost valuable seconds. Catching the ball is a necessity because dropping the ball earns a penalty. Making sharp turns after catching the ball shaves seconds off the clock. Finally, racing in a straight line is the fastest way to complete the course, so deviating off-course is a major boo-boo.

Are there flyball tournaments?

Flyball competitions are hosted by clubs that are sanctioned by the national organization and have licensed judges. In a race, the first team to have all four dogs cross the finish line error-free wins the heat. Several teams run the course, so there are many heats in a tournament.

Competitions may vary, but usually teams are seeded into divisions based on speed. Teams are responsible for estimating their best time to complete the course. The fastest team is seeded first. To encourage teams to seed themselves accurately, (i.e., not report a falsely slow speed) a “break out” speed is set at one second faster than the top seeded team in each division. If a team underestimates its speed and “breaks out”, the heat is recorded as a loss. With speed as the critical issue, accuracy is important. Many tournaments use electronic systems to ensure accurate timing of racers.

"Regardless of the format, sanctioned tournaments are designed for fair exciting competitions."

There are two basic formats in a fly ball tournament. In a round-robin format, each team races against all the other teams in their division. In a double elimination tournament, there is an arranged competition bracket and a team is ousted after losing twice. Regardless of the format, sanctioned tournaments are designed for fair exciting competitions.

Can any dog play flyball?

Much of flyball’s popularity lies in the fact that any dog can play. Flyball is open to any breed of dog, so mutts can race alongside pedigreed pooches. Although there is an abundance of herding dogs on a flyball course, mixed breeds are often champions.

Remember that flyball is a sport that involves lots of running and jumping, so sound joints and a healthy heart are a must. Have your veterinarian perform an overall physical exam to ensure that your dog is in good physical condition. Even young pups should be checked out because developing joints can be injured if over-stressed. Regardless of your dog’s age or how healthy they appear, get your veterinarian’s approval first.

All kinds of people can participate, too. Flyball is unique in that dog and owner work as a team in one of the few canine sports not focused on hunting. Dog owners enjoy the time spent with their pets and with other dog owners. Flyball participants are often regular dogs with regular dog owners who enjoy the sport as more of a hobby.

There are organized clubs to help newcomers get started, so if you and your dog are looking for something different to do, look into flyball!