Dogs and Our Emotions

As humans, we feel many emotions: joy, sadness, anger, surprise, empathy, sympathy, trust, love, and envy. We sometimes have a difficult time recognizing our own emotions, much less interpreting those of others. But it seems that our dogs have an easy time reading our feelings. Do you agree? Do you think your pet knows when you are sad? Does he know when you are afraid? Is it bad to display your emotions in front of your furry friend?

Do dogs understand us? 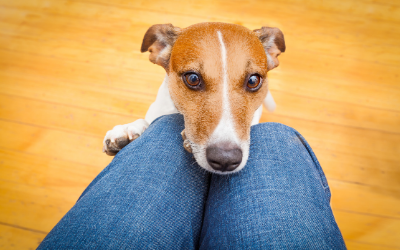 Most dog owners contend their pooch truly does understand them. And that understanding extends beyond verbal communication. Sure, if you tell a well-trained dog to "sit" he will drop down on his haunches. If you say, "fetch" she will scoot after the thrown ball. But do dogs understand much more than the spoken command? Yes! Dogs discern subtle visual cues and they "get the message" without a single word being uttered.

How? Dogs observe a social situation and read our body language. Are you afraid when walking your dog after dark? As you nervously watch for any strange movements, he’ll like stay by your side stride for stride. He’s saying, "I know you’re scared, but I’m with you". Are you deflated after a bad day at work? As you sulk on the sofa, she’ll place her head in your lap. She’s saying, "I’m sorry you had a rough day. Will a little TLC make it better?" Are you excited after acing a test? As you smile really big, he’ll wag his tail and prance around. He’s saying, "Wow, I’m proud of you!"

Our dogs understand our emotions and communicate their understanding without us saying anything! When they gather this visual information and add it to our tone of voice when we do speak, they can communicate with us!

Why do dogs understand us?

Since we don’t have much scientific evidence regarding just how much our dogs understand us, research is ongoing in that arena. Despite the halo of mystery, we do know that part of a dog’s ability to understand human emotions stems from the centuries-long relationship between humans and canines. Dogs and humans have existed side by side for thousands of years and during that time our canine friends have evolved as a species. Dogs have picked up human tendencies and relate to us innately.

With their domestication, dogs have also become dependent on us for their well being; thus, they are attentive to "the hand that feeds them". This physical dependence is another reason why dogs are attuned to our moods. They need us!

"Despite the halo of mystery, we do know that part of a dog’s ability to understand human emotions stems from the centuries-long relationship between humans and canines."

But, as you well know, we need them, too. Humans have selectively bred dogs for generations to produce the most compatible canine companion. We breed for agility, speed, size, intellect, and temperament. Perhaps, genetic selection has played a part in how well our dogs recognize and respond to our emotions. The evolution of both humans and dogs and our relationships impact the dog’s ability to understand us.

How do we know that dogs understand us?

Most examples of dogs understanding human emotion are anecdotal without any non-biased scientific proof. Still, there is a general consensus that a dog is similar to a 2 or 3-year-old human when it comes to matters of the mind. In studies, dogs and infants responded similarly to visual and auditory stimuli.

Some scientists believe that dogs, like toddlers, are susceptible to emotional contagion. This means dogs can respond to the emotions of humans without fully understanding what the person is feeling. For toddlers, when one baby starts to cry at day care, others cry along with them. These children may not understand why the first baby cried, but they join in the chorus. In a similar way, your emotional state may be contagious to your dog. If you are sad, they are affected by it and come close to nuzzle you. Your dog is comforting you while seeking comfort themselves. Other scientists believe another factor is in play. They think that when you "aren’t yourself" and act differently (e.g., glad or afraid), your dog simply approaches you out of curiosity.

"Despite these theories, most pet owners believe that their dogs truly understand them and a study from the United Kingdom agrees."

Despite these theories, most pet owners believe that their dogs truly understand them and a study from the United Kingdom agrees. In this study, dogs were shown pictures of people and other dogs along with vocalizations depicting happiness or anger. When the auditory cue matched the visual image, dogs spent longer examining the picture. By combining two different sources of sensory input these researchers, like pet owners, believe that dogs actually have the cognitive ability to recognize and understand positive and negative emotional states.

Recognizing emotion is one thing, but understanding it or feeling empathy is different. In the past, many scientists agreed that dogs communicate with us, but doubted that they actually felt our pain. A study documented in the journal, "Animal Cognition", shed more light on canine empathy. The researcher visited the homes of dog owners and ignored the dog so he would have little interest in them. The researcher and dog owner took turns humming and pretending to cry and observed the dog’s response to them.

Of the 18 dogs in the study, 15 approached the owner or investigator when they "cried" as opposed to only 6 when they hummed indicating that the dogs emotionally connected with the humans. If the dogs were merely curious, they would have approached the humming people with equal frequency. It appears that most dogs recognized that a humming person didn’t need to be comforted so they left them alone even though they were making a curious sound.

The study also showed that the dogs were trying to provide comfort, not seeking it. If they wanted to be comforted themselves, they would have approached the quiet person instead of the crier, especially when the quiet person was their trusted owner! Approaching the stranger in distress showed actual empathy.

In this study, scientists thought the dogs' emotional responses were in line with young children; however, the researchers didn’t claim to have definitive proof of canine emotional ability. Regardless, the study was a good indicator of the dog’s emotional capacity and, hopefully, future research will provide more information.

A Nose for Trouble

We acknowledge that dogs use visual and auditory cues when discerning human emotions. But, the canine nose also helps put them in tune with human moods.

"But, the canine nose also helps put them in tune with human moods."

Researchers from Italy had dog owners watch a scary film and a happy film and collected sweat samples from them both times. After the movies, the dogs, their owners and a stranger were placed in a room. When exposed to sweat samples collected from their owners during each film, the dogs responded differently to the "happy" or "afraid" odors. They adopted behaviors consistent with the emotions experienced by the humans during the movies.

When exposed to the fear sweat sample, the dogs' heart rates went up and they sought comfort from their owners, ignoring the stranger. When exposed to the happy sample, the dogs were more relaxed and less wary of the stranger. This study adds to the growing amount of data regarding the dog's ability to interpret human emotion by using multiple sensory input data to understand humans.

Our Emotional Attachment to Dogs

Whether due to centuries-long relationships between humans and dogs, or the canine’s innate ability to be empathetic, or his uncanny ability to read facial expressions and auditory cues, or his ability to smell fear, it’s nice to know that "man’s best friend" is a really good friend.

So, in response to our original question "Do dogs understand us?" – Yes, your dog does know how to read your feelings. She does know when you are happy, sad, excited, or afraid. And it’s not bad to show your emotions in front of your dog. The more emotions we share with our dogs, the closer our relationship becomes. We love them unconditionally and they love us right back!