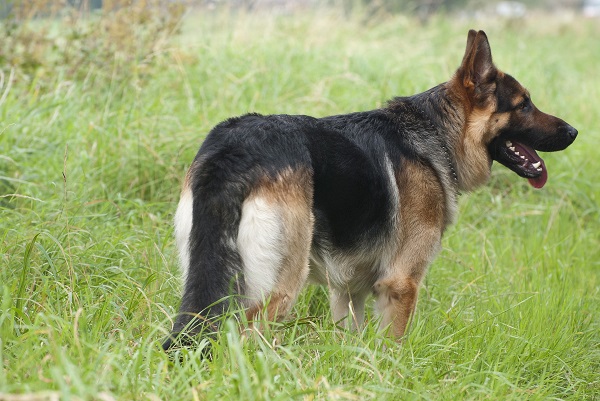 Ehrlichiosis is a tick-borne infectious disease of dogs, usually carried by the brown dog tick. It first gained attention as a significant disease when military dogs returning from Vietnam during the 1970s were found to be infected. The disease seems to be particularly severe in German Shepherds and Doberman Pinschers.

The organism responsible for this disease is a rickettsial organism. Rickettsiae are a specific group or “genus” of bacteria. Ehrlichia canis (E. canis) is the most common rickettsial species involved in ehrlichiosis in dogs, but other strains of the organism will occasionally be found.

Because of its origin in military dogs in Vietnam, it has also been called tracker dog disease and tropical canine pancytopenia.

How is a dog infected with Ehrlichia?

Ehrlichiosis is a disease that develops in dogs after being bitten by an infected tick. In the United States, E. canis is considered endemic in the southeastern and southwestern states, though the brown dog tick is found all throughout the United States and Canada. The brown dog tick is the main carrier of the Ehrlichia organism in nature. Other tick species have also been shown to transmit the disease in dogs and may carry other subspecies of Ehrlichia.

What are the signs of ehrlichiosis?

Signs of ehrlichiosis can be divided into three stages: acute (early disease), sub-clinical (no outward signs of disease), and clinical or chronic (long-standing infection).

In areas where ehrlichiosis is common, many dogs are seen during the acute phase. In this stage, infected dogs may have a fever, swollen lymph nodes, respiratory distress, weight loss, bleeding disorders (spontaneous hemorrhage or bleeding), and occasionally, neurological disturbances (they may seem unsteady or develop meningitis). This stage may last two to four weeks and some dogs may eliminate the infection or head into the sub-clinical phase.

"The sub-clinical phase is often considered the worst because there are no clinical signs, and the disease, therefore, goes undetected."

The sub-clinical phase represents the stage of infection in which the organism is present but is not causing any outward signs of disease. Sometimes a dog will pass through the acute phase without its owner being aware of the infection. These dogs may become sub-clinical and develop changes observed at the laboratory level, yet have no apparent signs of illness. The sub-clinical phase is often considered the worst because there are no clinical signs, and the disease, therefore, goes undetected. The only hint that a dog may be infected during this phase may be when a dog shows prolonged bleeding from the puncture site where a blood sample was drawn. Dogs that are infected sub-clinically may eliminate the organisms or may progress to the next stage, clinical ehrlichiosis.

Clinical ehrlichiosis occurs if the immune system is not able to eliminate the organism. Dogs are likely to develop a host of problems such as anemia, bleeding episodes, lameness, eye problems (including hemorrhage or blindness), neurological problems, and swollen limbs. If the bone marrow (site of blood cell production) fails, the dog becomes unable to manufacture any of the blood cells necessary to sustain life.

How is ehrlichiosis diagnosed?

"Since the presence of antibodies to E. canis is the basis of the most common diagnostic testing, disease-infected dogs may test negative during the early stages."

Since the presence of antibodies to E. canis is the basis of the most common diagnostic testing, disease-infected dogs may test negative during the early stages. Testing performed a few weeks later will reveal the presence of antibodies and make confirmation of the diagnosis possible. Your veterinarian can perform a special screening test in the clinic to see if your dog was exposed. Your veterinarian may use ELISA (enzyme-linked immunosorbent assay) or DNA/PCR (polymerase chain reaction) tests to determine the species of Ehrlichia that is infecting your dog. These tests are sent to outside laboratories for analysis.

Baseline blood tests including a complete blood cell count and chemistry should also be done. A low platelet count (called thrombocytopenia), anemia, and/or high levels of the protein globulin in the blood may be found. Urinalysis should also be performed to determine if the infection is affecting the kidneys, causing the loss of protein in the urine.

Rarely, the organism itself may be seen in blood smears or in samples of cells taken from the lymph nodes, spleen, and lungs. This is a very uncommon finding.

How is ehrlichiosis treated?

Certain antibiotics, such as doxycycline (Vibramycin®) are quite effective. A long course of treatment, generally four weeks, is needed. This is the treatment of choice as it is easily accessible and generally well tolerated. Your veterinarian will discuss treatment options with you, as some supportive medications such as steroids may be needed depending on the clinical state of the patient and blood parameters.

Dogs experiencing severe anemia or bleeding problems may require a blood transfusion. However, this does nothing to treat the underlying disease.

How can I protect my dog from ehrlichiosis?

Ridding the dog's environment of ticks and applying flea and tick preventives are the most effective means of prevention. Topical options include Advantix®, Frontline Plus®, Vectra 3D® or Bravecto®. Oral chewable options include Nexgard®, Simparica®, Credelio®, or Bravecto®. There is also the Seresto® collar that can be effective for up to eight months. As new products are constantly being developed, your veterinarian will help you determine which preventive is best for your dog.

Can I get ehrlichiosis from my dog?

No. However, humans can get canine ehrlichiosis from tick bites. The disease is only transmitted through the bites of ticks. Therefore, even though the disease is not transmitted directly from dogs to humans, infected dogs serve as sentinels or warnings to indicate the presence of infected ticks in the area.