Encephalitozoonsis is an infection that can affect the kidneys, eyes, and nervous systems of rabbits. It is caused by an organism called Encephalitozoon cuniculi or E. cuniculi, a small microsporidian parasite. It is an intracellular parasite, meaning it has to live within another cell. Encephalitozoonosis can affect rabbits, mice, hamsters, dogs, cats, guinea pigs, and humans. It usually causes a latent condition in rabbits, meaning that most infected rabbits will show no symptoms.

How could my rabbit become infected with encephalitozoonosis? 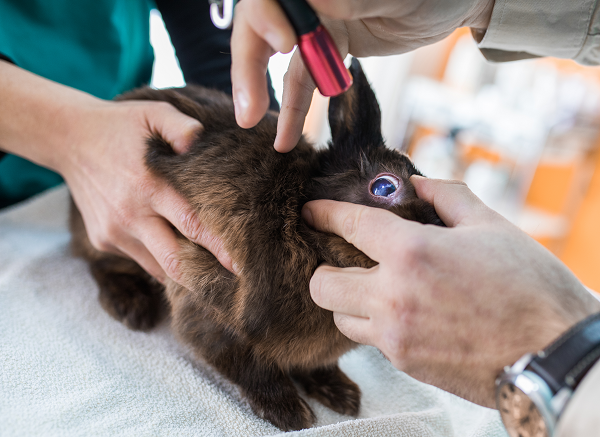 Rabbits get infected in two ways:

2. From the mother. E. cuniculi can be passed by a mother to her unborn baby (in utero infection). Rabbits infected in utero may produce infections that reside in the lens of the eyes.

What are the clinical signs of encephalitozoonosis in rabbits?

"Most infected rabbits do not show any signs until they are older, or become stressed or immunocompromised."

Most infected rabbits do not show any signs until they are older, or become stressed or immunocompromised. Some rabbits never show any signs. If your rabbit is infected and signs do develop, you may see any of the following:

How is encephalitozoonosis in rabbits diagnosed?

Your veterinarian can make a presumptive diagnosis based on clinical signs and by ruling out other possible diagnoses. Sometimes, a diagnosis is presumed based on a rabbit’s response to treatment. There are blood tests that can detect antibodies to the E. cuniculi organism. A positive test with clinical symptoms is significant. Non-clinical cases or carriers are extremely difficult to diagnose with blood tests.

After a rabbit passes away, a necropsy can be performed and sections of the kidneys and/or other organs can be submitted to a pathologist to search for the E. cuniculi organism. If there is more than one rabbit in the household, the other rabbits should be tested and/or treated.

"If there is more than one rabbit in the household, the other rabbits should be tested and/or treated."

There are several effective drugs to treat the disease, however, there are no specific anti-E. cuniculi drugs. Both fenbendazole (Panacur®) and ponazuril (Marquis®) have shown effectiveness when combined with an NSAID (non-steroidal anti-inflammatory drug). Severely infected rabbits often have little to no response to medical treatment.

Cases involving the ocular form need to be referred to a veterinary ophthalmologist if surgery is recommended. The growth in the eye will not go away with medical treatment alone. With medical treatment, these ocular lesions will stabilize and may not require more aggressive treatment.

If your rabbit declines in health, humane euthanasia may be a loving consideration.

Do I have to worry about encephalitozoonosis affecting me and my family?

Encephalitozoonosis infection in humans is poorly understood. The condition has been described in a few cases in people, and it is reported that very young, elderly, and immunocompromised people are most at risk. This underlines the importance of always washing your hands after handling any animal and before eating or preparing food.