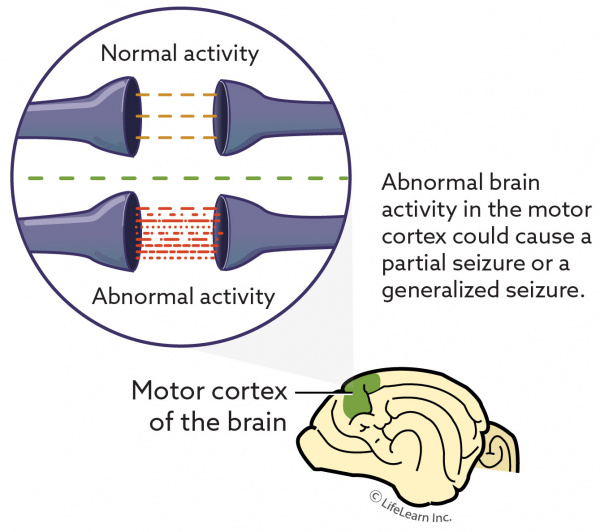 Epilepsy is a brain disorder characterized by recurrent seizures without a known cause or abnormal brain lesion (brain injury or disease). In other words, the brain appears to be normal but functions abnormally. A seizure is a sudden surge in the electrical activity of the brain causing signs such as twitching, shaking, tremors, convulsions, and/or spasms.

What are the clinical signs of epilepsy?

Seizures can vary in appearance and can be focalized (only affecting part of the body - see handout “Focal Seizures and Fly-Biting in Dogs”) or generalized (affecting the whole body – see handout “Seizures in Dogs”). Generalized seizures are more common and are often characterized by a stiffening of the neck and legs, stumbling and falling over, uncontrollable chewing, drooling, paddling of the limbs, loss of bladder control, defecating, vocalizing, and violent shaking and trembling. Seizures can last a few seconds to a few minutes, on average about 30-90 seconds, and the pet is typically unaware of the surroundings during this period.

Afterwards, the pet may appear confused, disoriented, dazed, or sleepy; this is called the post-ictal period.

Prior to the seizure, many pets will also experience the aura stage; this is characterized by the pet appearing anxious, frightened, or dazed, as if the pet can sense an upcoming seizure. It is estimated that up to two percent of all dogs will have a seizure in their lifetime.

How is epilepsy diagnosed?

Epilepsy is a diagnosis of exclusion; the diagnosis of epilepsy is made only after all other causes of seizures have been ruled out. A thorough medical history and physical examination are performed, followed by diagnostic testing such as blood and urine tests and radiographs (X-rays). Additional tests such as bile acids, cerebrospinal fluid (CSF) testing, computed tomography (CT) or magnetic resonance imaging (MRI) may be recommended, depending on the initial test results.

What is the treatment of epilepsy?

Anticonvulsants (anti-seizure medications) are the treatment of choice for epilepsy. There are several commonly used anticonvulsants, and once treatment is started, it will likely be continued for life. Stopping these medications suddenly can cause seizures.

"The risk and severity of future seizures may be worsened by stopping and re-starting anticonvulsant drugs."

The risk and severity of future seizures may be worsened by stopping and re- starting anticonvulsant drugs. Therefore, anticonvulsant treatment is only prescribed if one of the following criteria is met:

Phenobarbital is a common anti-seizure medication used in dogs, and is usually given twice daily. Irregular dosing schedules (including starting and then stopping the medication, or forgetting to give pills causing blood levels to fluctuate) may predispose your pet to more frequent or more violent seizures, so it is important to give the medication on time.

When starting this medication, phenobarbital levels are measured via blood samples every two to four weeks until the correct dosage is determined. Once the therapeutic dose for your pet is determined, phenobarbital blood levels and liver function tests will need to be monitored at least every six months to ensure that phenobarbital levels stay within the therapeutic range (i.e., that they do not get dangerously high or low), and that there are no signs of liver problems. In the event that phenobarbital blood levels get too high, liver failure can develop, which may lead to death. If the levels are too low, seizures will not be controlled.

Additional drugs such as potassium bromide or newer human anti-seizure medications such as zonisamide (brand name Zonegran®) or levetiracetam (brand name Keppra®) may be used. Your veterinarian will determine the proper treatment plan for your pet's condition.

What is the prognosis for a pet with epilepsy?

Most dogs do well on anti-seizure medication and are able to resume a normal lifestyle. Some patients continue to experience periodic break-through seizures. Many dogs require occasional medication adjustments, and some require the addition of other medications over time.