When does a female dog have her first estrous (heat) cycle?

Dogs will have their first estrous (reproductive or heat) cycle when they reach puberty. Each cycle consists of several stages; the stage called estrus refers to when the female can become pregnant. Often a dog that is in the estrus stage is said to be in heat or in season.

"A dog that is in the estrus stage is said to be in heat or in season."

On average, puberty (or sexual maturity) is reached at about six months of age, but this can vary by breed. Smaller breeds tend to have their first estrous cycle at an earlier age, while large and giant breeds may not come into heat for the first time until they reach eighteen months to two years of age.

How often does a female dog come into heat? 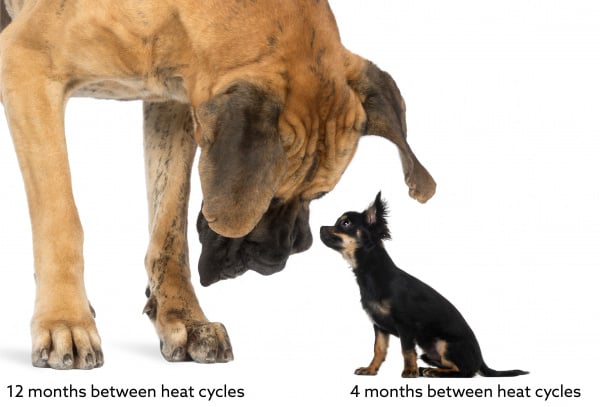 Most dogs come into heat twice per year, or about every six months, although the interval can vary between breeds and from dog to dog. Small breed dogs may cycle three times per year, while giant breed dogs may only cycle once every 12 months. When young dogs first begin to cycle, it is normal for their cycles to be somewhat irregular. It can take up to two years for a female dog to develop regular cycles. There is no time of year that corresponds to a breeding season for (domesticated) dogs except for Basenjis and Tibetan Mastiffs which typically tend to cycle in the spring.

What are the signs of estrus?

The earliest sign of estrus is swelling or engorgement of the vulva, but this swelling is not always obvious. In many cases, a bloody vaginal discharge is the first sign that a pet owner will notice when their dog comes into heat. In some cases, the discharge will not be apparent until several days after estrus has begun. The amount of discharge varies from dog to dog.

"In many cases a bloody vaginal discharge is the first sign that a pet owner will notice when their dog comes into heat."

The vaginal discharge will change in color and appearance as the cycle progresses. At first, the discharge is very bloody, but as the days pass, it thins to become watery and pinkish-red in color. A female dog that is in heat will often urinate more frequently than normal, or may develop marking behavior, in which she urinates small amounts on various objects either in the home or when out on a walk. During this phase of her cycle, the urine contains pheromones and hormones, both of which signal her reproductive state to other dogs. This is the reason that dogs in heat will attract other dogs, particularly males.

Male dogs can detect a female in heat from a great distance and may begin marking your property with their urine in an attempt to claim their territory.

How long does estrus last?

Estrus is the stage when the dog can become pregnant. Although this can vary with each individual, on average a dog will be in heat for 1 ½  to 2 weeks but this can be shorter or longer. 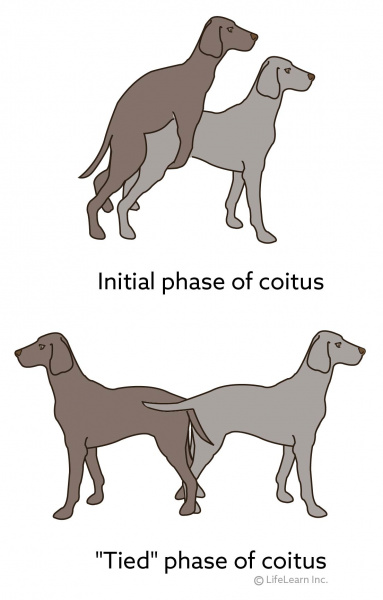 At what stage of the estrus cycle is the dog able to get pregnant?

The female dog usually ovulates at about the time that the vaginal discharge becomes watery; this marks her most fertile stage and is the time when she will be most receptive to breeding. However, sperm can survive for a week in the reproductive tract and still be capable of fertilizing the eggs, so it is possible for her to get pregnant at any point while she is in estrus. Contrary to popular belief, it is not necessary for the female to tie with the male dog in order to get pregnant (for further information see the handout "Estrus and Mating in Dogs").

How long does pregnancy last in a dog and when can pregnancy be detected?

How can I prevent my dog from becoming pregnant?

The best way to prevent your dog from becoming pregnant is to have her surgically sterilized (an ovariohysterectomy or spay operation) before she has her first estrous cycle. Since it can be difficult to predict when this first cycle will occur, most veterinarians recommend performing an ovariohysterectomy before the dog is six to seven months of age.

Is there anything I can do if my dog has been mismated, or accidentally mates with another dog?

Should I let my dog have an estrus cycle or a litter of puppies before spaying her?

There are no valid reasons for letting a dog have a litter of puppies before being spayed. Newer research has shown that some larger dog breeds (Labrador Retrievers, Golden Retrievers, and German Shepherds) may benefit medically from delaying their spay surgery until after their first heat cycle; however, the overall consensus at this time is that spaying will increase the lifespan of a dog. Dogs can become pregnant on their very first estrous cycle, increasing the chance that an accidental breeding may occur. Dogs are indiscriminate, so a brother may breed with its sister, a father may breed with his daughter, and a son may breed with his mother.

A common myth is that female dogs will become more friendly and sociable if they are allowed to have a litter of puppies. This is not true, and only serves to contribute further to the serious problem of dog overpopulation.