Feather loss is as much of a concern to bird owners as hair loss is to dog and cat owners. The feathers of a bird provide protection, insulation, flight, and visual signals to other pets. While feather loss in birds is usually not fatal, it is nevertheless disturbing to owners. Occasionally, feather loss can be the sign of a serious disease.

Feather loss occurs either because the bird is truly losing feathers or because the bird, or its cage-mate, is picking out its feathers. If the owner can tell which is occurring, it often helps narrow down the possibilities of what is causing the problem.

Feather-picking is often a behavioral problem, especially in the larger species of birds (such as cockatoos, macaws, and African gray parrots) that are extremely intelligent and are tightly bonded to their owners. However, feather-picking and feather loss can also be caused by diseases that result in irritation or pain for the bird, or damage to, or inappropriate growth of feathers. 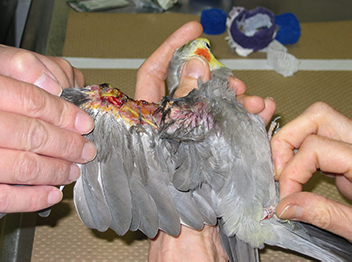 True feather loss (i.e., loss that is not associated with a normal molt) is typically the result of disease. Possibilities include infections with viruses (such as psittacine beak and feather disease virus and polyoma virus), bacteria (such as a Staphylococcus bacteria), and parasites (such as a Giardia in cockatiels), or other internal diseases (such as liver or kidney disease).

How do you diagnose the cause of feather loss?

Because there are many causes of feather loss, your veterinarian may have to many perform many diagnostic tests to rule-out potential causes. A good history (supplied by the owner) and a thorough physical examination are critical and may help narrow down the list of possibilities. Your veterinarian will review your bird’s diet and help correct any dietary deficiencies. Routine diagnostic tests, including various blood tests, fecal tests for parasites, microscopic analysis and/or culture of stool, feathers, and skin to check for yeast and bacteria, and radiographs (X-rays) may be performed to achieve a diagnosis.

"Your veterinarian will review your bird’s diet and help correct any dietary deficiencies."

Sometimes, a feather and skin biopsy and culture are needed to make a definitive diagnosis. Occasionally, tests fail to reveal a diagnosis, and your veterinarian makes a clinical judgment as to the best course of therapy for your bird.

How is feather loss treated?

That depends upon the cause of the disorder. Psittacine beak and feather disease is a fatal condition caused by a virus that suppresses the immune system and that cannot be treated. It does not cause feather-picking, but rather it causes feathers to fall out.

Other skin and feather infections caused by bacteria or viruses may respond to antibiotics or antiviral medications, respectively. Parasites associated with feather-picking can be eradicated with antiparasitic drugs. Behaviorally-based feather-picking is difficult to treat, as the cause (stress, overcrowding, sexual frustration, a new person in the house, a new cage, etc.) of the picking may be difficult to pinpoint and change. Treatment of behaviorally-based feather-picking may be attempted with behavior modification and occasionally drug therapy, as a last resort.

"Skin and feather infections caused by bacteria or viruses may respond to antibiotics or antiviral medications, respectively."

Owners should be aware at the outset that even if a diagnosis is reached, it may be difficult to prevent feather-picking in a bird once it has started, especially if the cause is behavioral. Feather loss and feather-picking are complicated problems; for specific advice, your bird should have a thorough work-up by a veterinarian familiar with birds.