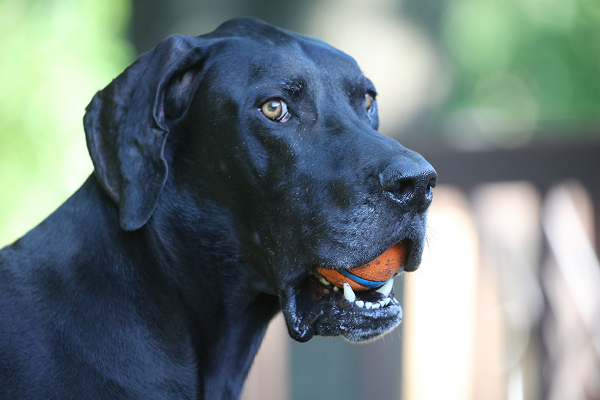 What is a gastropexy?

A gastropexy is a surgical procedure that is sometimes performed in large breed dogs to prevent gastric dilatation and volvulus (GDV), also known as bloat. A gastropexy may be performed prophylactically (as a preventive measure in a healthy dog predisposed to this condition) or may be done as part of the surgical management of GDV (to prevent recurrence after the stomach has been returned to its normal position).

What is gastric dilatation and volvulus (GDV)?

"Gastric dilatation and volvulus (GDV) is a life-threatening condition that is most commonly observed in deep-chested, large breed dogs."

With GDV, the stomach becomes dilated with gas and/or fluid and becomes twisted on itself, meaning that the gas/fluid cannot escape. This leads to rising pressure levels within the stomach, decreasing blood flow to the stomach tissues. In some cases, the spleen can also get twisted with the stomach, having its blood supply compromised as well. Disruptions in blood supply can lead to death (necrosis) of the gastrointestinal tract and spleen, while also having significant effects on blood pressure and overall health status. Without emergency treatment, GDV is fatal.

How does a gastropexy prevent GDV?

During a gastropexy, your veterinarian will surgically 'tack' the stomach to the right side of the body wall. This will hold the stomach into place, preventing it from making the twist that results in GDV. There are a variety of surgical techniques that can be used to perform the procedure, however, the most common technique involves creating an incision through the outer layer of the stomach and a corresponding incision on the inside of the body wall, where the stomach is to be located. These incisions expose underlying bleeding tissue. Your veterinarian will suture the stomach to the body wall using two lines of suture, allowing the exposed/bleeding tissue of the stomach and body wall to contact each other. As these incisions heal, they will heal together, creating a connection of scar tissue that will hold the stomach in a fixed location. 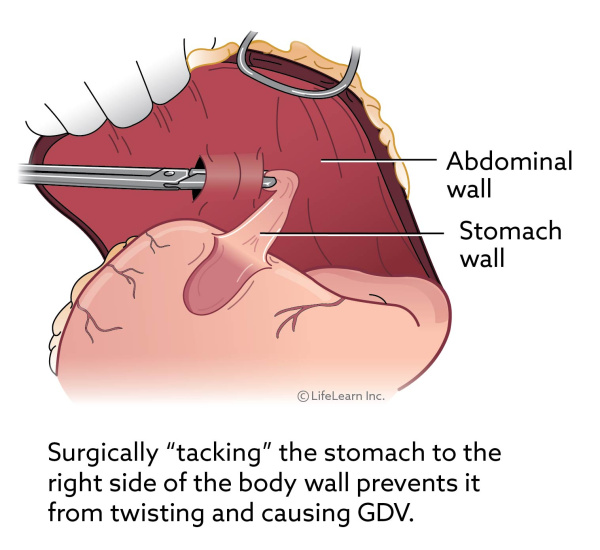 In what situations might my veterinarian recommend a gastropexy for my dog?

There are two primary indications for gastropexy:

2) Gastric dilatation and volvulus. Dogs who develop GDV require emergency surgery to untwist the stomach and gastropexy is a component of this surgery. Once the stomach has been restored to its normal position, a gastropexy is performed to tack the stomach in place to prevent a recurrence. Gastropexy reduces the risk of recurrence from 55% to only 4%.

"It is estimated that 40% of Great Danes will develop GDV at some point during their lifespan; prophylactic gastropexy significantly reduces this likelihood."

What post-operative care is required after a gastropexy?

With a prophylactic gastropexy, there is no specific post-operative care beyond that required for a routine spay or neuter. Patients should be kept calm for approximately seven days post-operatively to allow healing. Running and jumping should be prevented during this time, and pets should avoid swimming or bathing so that the incision can be kept clean and dry. Your dog will likely be sent home with pain medication and it is important to use these medications as directed.

A gastropexy performed on an emergency basis, when a dog has developed GDV, often requires more involved post-operative care, depending on the severity of stomach damage noted during surgery. Most dogs will remain hospitalized for several days post-operatively before being sent home for the remainder of their recovery period. In addition to the activity restriction required with a prophylactic gastropexy, your dog may require a prescription diet and/or medication to protect the gastrointestinal tract.