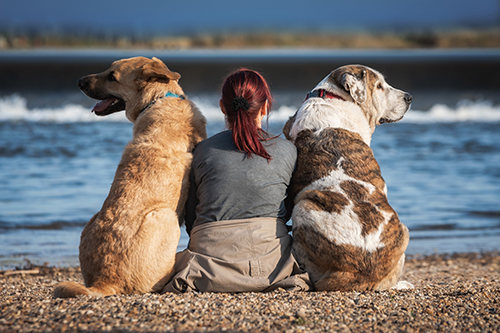 Poodles and Pugs. Beagles and Bulldogs. Labradors and Lhasa Apsos. There are approximately 400 distinct canine breeds on record, representing an astounding variety of dogs in all shapes, sizes and colors. How did the domestic dog get so many branches on its family tree?

Charles Darwin may have enlightened the world with his theory of natural selection, but even the father of evolution questioned the origin of the domestic dog. Where did Fido come from? What makes a Yorkie a Yorkie instead of a St. Bernard? Darwin recognized that the canine family tree was huge and felt that outlining Fido’s ancestry was a daunting task due to the enormous number and variety of breeds.

"All domestic dog breeds (Canis lupus familiaris) are descended from a single canine, the gray wolf."

Fido’s family tree bears a multitude of branches, but they all sprout from one root source. All domestic dog breeds (Canis lupus familiaris) are descended from a single canine, the gray wolf (Canis lupus). Despite their common root, domestic dogs vary more in size and shape than any other mammal. Why? Evolution.

Dogs have significantly evolved over the years and scientists marvel at their evolutionary changes. In fact, scientists study canine ancestry as an evolutionary model, noting the contribution ancient humans made to the evolutionary progress of the domestic dog.

Advances in modern science are finally approaching an answer. A team from Stockholm gathered and analyzed mitochondrial DNA (located in the energy-making parts of a cell) from dogs all over the world in an attempt to uncover how so much variation can occur within one family. Another study has begun to sequence large sections of genes from almost 300 dogs representing 10 distinct breeds. And still another study focused on regions of genes that exhibited changes between breeds and linked them to specific physical traits. This scientific team identified 155 locations on genes that changed due to targeted breeding. Every little change in the genome affects evolution.

Creating over 400 breeds of dog did not happen overnight. The creation of a pure blood line occurs over many generations, but starts with the mating of two dogs that exhibit desired traits. Then the best pups of the litter are identified for future breeding. Man may have thought, “This male and this female dog are both good herders. We could breed them together and make more good sheepdogs!” After breeding and selecting the “pick of the litter” over many generations, consistently good pups are produced and a new breed is formed.

"...at the end of the 19th century, breeding for fun, not function, took precedence."

Out of necessity, early man practiced selective breeding for function and introduced many new dog breeds. At the end of the 19th century, however, breeding for fun, not function, took precedence. Affluent members of society enjoyed showing off their unique dogs and more breeds arose. The distinction of being “best” was sought after, so competitions were organized with written breed standards to ensure fairness in the show ring. Regardless, if selective breeding is performed for need or entertainment, the goal is to produce the best of the breed.

Selective breeding has coerced Mother Nature into creating hundreds of distinct canine breeds with very little genetic variation within a breed. Basic genetics illustrates that chromosomes come in pairs with one coming from each parent. When closely related dogs are bred (inbreeding), they are more likely to carry the same genes for the same traits and produce pups with the desired qualities (phenotypes).

"...selective breeding to create a specific kind of dog has resulted in vast differences in size, shape, color, coat length and texture, and temperament."

So, even though all dogs claim the gray wolf as their common ancestor, selective breeding to create a specific kind of dog has resulted in vast differences in size, shape, color, coat length and texture, and temperament. The variety of resulting dog breeds displays distinct phenotypes and characteristics in the canine family. That is why we have Australian Shepherds that herd sheep, Greyhounds that run like the wind, and Miniature Poodles that cuddle on the couch.

Dog breeding is an art and a business. Breeders take pride in their accomplishments and strive to make a particular breed as “pure” as possible. Identifying pure bred dogs historically depended on a valid pedigree. Each tiny twig of each small branch of the huge canine family tree was identified on both the maternal and paternal sides to verify a pup’s lineage before being designated as “pure bred”.

Adding mixed breeds to the canine family further enlarges the tree and entangles the branches. In the past, dogs of mixed lineage were identified by their looks. A dog might have Dachshund legs, a Collie snout, or Bassett Hound ears. Identifying the breeds that are “mixed” is a guessing game unless DNA analysis is utilized.

Several companies offer DNA tests to pet owners who want to know what kind of dog they have or to potential pet owners who want to know more about a dog before they add one to the family. How big will he get? Will she have long or short hair? Is he good with children? Knowing a pet’s breed can also shed light on possible health issues the dog may face. So, if a dog does not come with a paper trail outlining his ancestry, his breed can be identified with some degree of accuracy. Even if a dog has a long lineage, a DNA test can verify the breed or combination of breeds.

The Wide World of Dogs

After generations of targeted breeding, the dog genome is more varied today than it was 14,000 years ago when the dog was first domesticated and intentionally bred. But most breeds are the result of breeding practices that spanned only the last 200 years.

In his time, Darwin probably did not envision so many different dog breeds evolving from a single wolf. But, he knew that canines would evolve. And, evolution is an ongoing event. Who knows what new breed will be added to the canine family tree next?