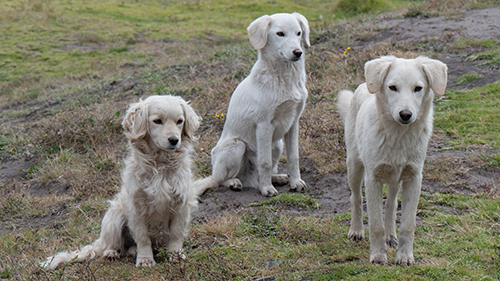 What determines an animal’s genetic makeup?

Inherited traits or disorders are passed down in an animal’s genetic code. This genetic code is found in the animal’s DNA, a long molecule that is present in every cell in the body (see handout "Genetic Basics: Understanding DNA"). The DNA contains thousands of genes. A gene is a specific DNA sequence that leads to the expression of an inherited characteristic. For example, there are genes that determine eye color, coat color, and other body characteristics.

How does an animal inherit a trait?

"When an egg is fertilized by the sperm, the new offspring will receive one chromosome from each parent."

When an egg is fertilized by the sperm, the new offspring will receive one chromosome from each parent. This will result in the offspring’s cells again having paired sets of chromosomes, with two copies of each gene. Each copy of the gene is referred to as an allele. For example, in the eye color gene, there may be a blue allele, green allele, brown allele, or other color. Each animal receives one copy of each allele from his mother and one copy from his father.

With two potentially-different alleles present for each gene, how does the body know which allele to express?

The result of each combination of alleles is determined by a trait’s mode of inheritance. Some alleles are dominant, meaning that only a single copy of that allele is necessary to express the trait. This is referred to as an autosomal dominant trait. Other alleles are recessive, meaning that both alleles must be the same in order for the disorder to be observed. This is called autosomal recessive inheritance.

What is autosomal dominant inheritance?

For an autosomal dominant disorder, only one copy of a given allele is necessary to produce the trait. If an animal receives an abnormal allele from one parent and a normal allele from the other parent, the abnormal trait will be expressed. Affected animals may express the trait to varying degrees, but all animals who carry a copy of the gene will be affected by the trait. Autosomal dominant genetic disorders are uncommon in breeding, because there are no asymptomatic carriers. All affected animals can be readily detected and removed from breeding programs.

"For an autosomal dominant disorder, only one copy of a given allele is necessary to produce the trait."

Polycystic kidney disease (PKD) in Persian cats is an example of an autosomal dominant trait. In this condition, hereditary kidney abnormalities can lead to premature kidney failure and death. Historically, as many as 50% of Persian cats were affected with this condition. After recognizing that this is an autosomal dominant disorder, meaning that there are no healthy carriers of this condition and any affected cat must have at least one affected parent, careful breeding efforts have now significantly reduced the prevalence of this disease. Initially, cats who were intended for breeding were evaluated by ultrasound; cats who had normal kidneys were suitable for breeding, while cats with abnormal kidneys were not bred. More recently, DNA tests have been developed that can detect affected cats with a simple cheek swab. By not breeding affected cats, breeders have significantly reduced the prevalence of PKD in Persian cats.

With an autosomal recessive genetic disorder, an animal must receive two copies of the abnormal gene (one from each parent) in order to show signs of the disorder. In most situations, this occurs when both parent animals are asymptomatic carriers of the disorder.

"Autosomal recessive disorders are more likely to be seen when closely related animals are bred..."

Autosomal recessive disorders are more likely to be seen when closely related animals are bred, such as in the case of purebred dogs and cats. This occurs due to similarities in the genetic makeup of closely related animals. Additionally, autosomal recessive traits are hard to eradicate from the breeding pool. Many carriers show no outward signs of disease, making them difficult to detect. When bred with another carrier, the appearance of genetic disorders in offspring may appear random without an understanding of the factors that result in the expression of a recessive genetic disorder.

One example of a recessive genetic disorder in dogs is progressive retinal atrophy (PRA). A dog who is affected with PRA may have parents who did not develop PRA, but instead served as carriers of the disease. In order to avoid creating offspring with PRA, dogs belonging to high-risk breeds should undergo genetic testing prior to breeding. This testing will determine whether one or both parents are a carrier of the disease. If so, these dogs should be removed from the breeding program to decrease future incidence of PRA.

What is sex-linked inheritance?

"Sex-linked disorders are genetic disorders that are carried only on the X chromosome."

Is inheritance always so straightforward?

Unfortunately, no. Some traits are considered to be polygenic traits, associated with a number of genes. Expression of these genes is complex, related to interactions between multiple genes and often environmental factors (such as nutrition, rate of growth, exercise, etc.). These traits are often expressed on a continuum, with animals being more or less affected based on their particular genetic makeup and environment. Elimination of these traits is nearly impossible, but improvements in the overall genetic pool can be made by breeding animals at the more desirable end of the continuum.

One example of a polygenic trait is hip dysplasia. Hip dysplasia is controlled by a number of genetic factors, but there are also environmental factors at play in the development of disease within a given individual. Despite over 50 years of efforts to control hip dysplasia, the condition still remains a problem in many large dog breeds. However, screening tests such as radiographic examinations can be used to help decrease the likelihood and severity of hip