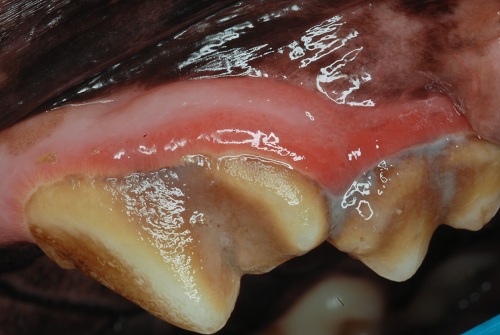 Halitosis is an offensive odor coming from the oral cavity.

What causes halitosis in dogs?

Halitosis is caused by:

Contrary to common belief, neither normal lung air nor stomach aroma contribute to halitosis in dogs.

The most common cause of halitosis in dogs is periodontal disease arising from plaque (biofilm) and tartar build-up. The plaque biofilm forms over a freshly cleaned and polished tooth as soon as the dog starts to salivate. Within days, the plaque becomes mineralized, producing rough tartar (calculus) which accumulates more plaque and causes gum inflammation (gingivitis). As plaque ages and gingivitis progresses into periodontitis (tooth support loss), the bacterial flora changes from good bacteria to destructive bacteria.

"The most common cause of halitosis in the dog is periodontal disease arising from plaque (biofilm) and tartar build-up."

The primary cause of bad breath in dogs is bad bacteria causing decay that creates smelly sulfur compounds. Volatile sulfur compounds may also play a role in periodontal disease affecting the integrity of the tissue barrier, allowing endotoxins (a part of bacteria) to produce periodontal destruction, endotoxemia (endotoxins in the blood), and bacteremia (bacteria in the blood).

Small and flat-faced breeds are more prone to oral disease because the teeth are closer together, smaller animals live longer, and their owners tend to feed them softer food.

How is halitosis treated?

Treatment of halitosis in the dog involves eliminating the cause(s). First, the teeth need to be thoroughly cleaned and polished under general anesthesia (see handout "Dental Cleaning in Dogs" for more information). Cleaning removes plaque and tartar (calculus) above and below the gum line (with the help of hand instruments and scaler tips designed to be used under the gum line). 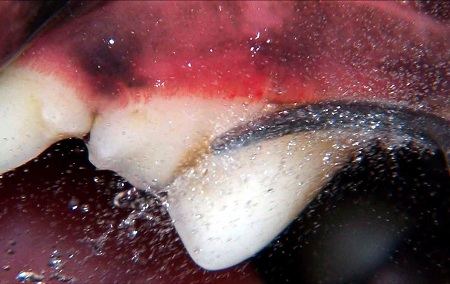 After teeth cleaning, a tooth-by-tooth examination for periodontal support loss is conducted. Intraoral dental X-rays are inspected to complete the oral assessment.

Often, those teeth affected by advanced periodontal disease need to be extracted.

How can halitosis be prevented?

Oral care products containing metal ions, especially zinc, can inhibit the formation of odor through their natural attraction to sulfur; zinc and hydrogen sulfide combine to form the insoluble compound zinc sulfide. Zinc also interferes with microbial growth and calcification of microbial deposits that can cause halitosis.

After the causes of halitosis have been identified and eliminated, daily plaque control is an essential part of controlling and preventing halitosis from recurring. Fortunately, there are products available that decrease the accumulation of plaque once the teeth are clean. The Veterinary Oral Health Council only accepts dental products that are safe and proven to reduce the accumulation of plaque and tartar based on scientific studies; accepted products are listed at VOHC.org, or ask your veterinarian for recommendations.

Tooth brushing at least twice a week is highly recommended.