Heartworms are a blood-borne parasite called Dirofilaria immitis that reside in the heart or adjacent large blood vessels of infected animals. Female worms are 6 - 14" long (15 - 36 cm) and 1/8" wide (3 mm). Males are about half the size of the females.

Heartworm disease is much more common in dogs than in cats. However, recent studies of cats with heart and respiratory diseases have found an incidence of heartworms that is far greater than previously thought. Cats are relatively resistant to heartworm infection when compared to dogs, with the infection rate in cats reported to be 5-20% of the rate in dogs in the same geographic location; however, infection can still occur. Typically, cats have fewer adult worms than dogs, usually less than six. Many pet owners are surprised to learn that approximately 1/3 of infected cats live indoors only.

How are heartworms transmitted to a cat? 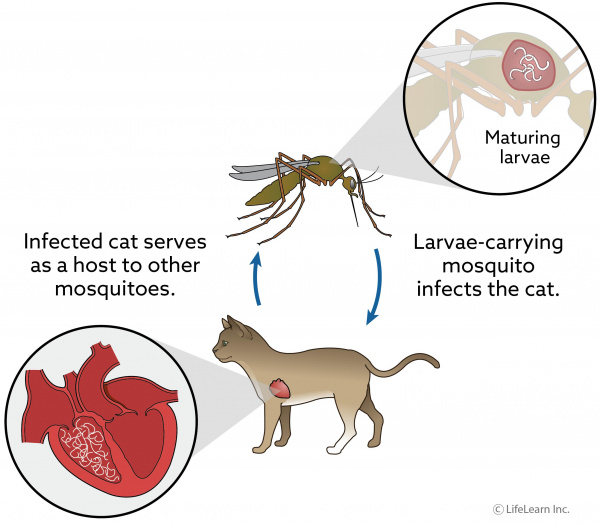 The life cycle of the heartworm is complex and requires two host animals in order to complete it. Heartworms require the mosquito as an intermediate host and as many as 30 species of mosquitoes can act as this host and transmit heartworms.

Mosquitoes ingest immature heartworm larvae, called microfilariae, by feeding on an infected cat or, more commonly, an infected dog. The microfilariae develop further for 10 to 30 days in the mosquito's gut and then enter its mouthparts. When an infected mosquito bites a cat, it injects infective larvae into the cat.

The larvae migrate into the bloodstream, ending up in the right side of the heart and the pulmonary arteries. There they mature into adult heartworms capable of reproduction within about 6 to 7 months. Shortly thereafter, at around eight months after infection, they begin to produce a new crop of microfilaria that will live in the cat's blood for about one month. Cats are resistant hosts, and few circulating microfilariae are generally found.

Because of this life cycle, it is necessary for a cat to be bitten by an infected mosquito in order to become infected with heartworms. Heartworms are not transmitted directly from one cat to another or from a dog directly to a cat.

The risk of infection is greatest when mosquitoes are actively feeding. This typically requires temperatures over 50°F (10°C). 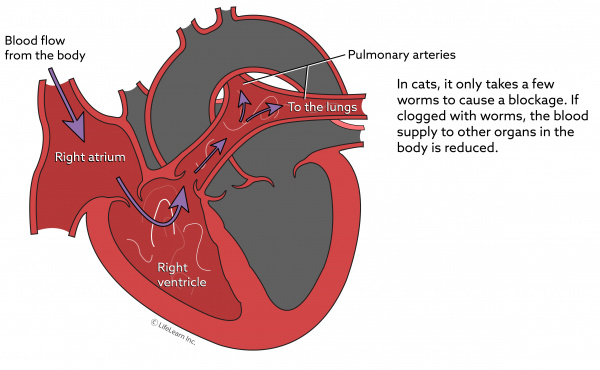 How are heartworms diagnosed?

There are several methods used in diagnosing heartworms; unfortunately, none are 100% reliable, so a combination of tests is often needed. The diagnostic sequence usually progresses as follows:

One of the most challenging aspects of diagnosing feline heartworm disease is that there are no specific clinical signs. The most common signs are a sudden onset of coughing and rapid breathing, signs that can also be caused by several other diseases.

"One of the most challenging aspects of diagnosing feline heartworm disease
is that there are no specific clinical signs."

Other common non-specific clinical signs include weight loss and vomiting. On occasion, an apparently normal cat may be found dead, or may develop sudden overwhelming respiratory failure, and heartworm disease is diagnosed on a post-mortem examination. Sudden death is thought to be due to a reaction within the lungs to the young heartworms, or to a reaction to dead or live heartworms entering the pulmonary arteries and obstructing the flow of blood to the lungs.

1. The heartworm antibody test determines if the cat's immune system has been exposed to heartworms. A positive test may indicate that an active infection is present. However, cats who have had heartworms but whose heartworms have died will also have antibodies for an unknown time. Cats with late stage larvae that are not yet adults, and cats with adult heartworms in places other than the heart, may also test positive with the antibody test. This test is relatively sensitive, so it is used first. If it is positive, the next test is performed.

2. The heartworm antigen test detects the presence of adult female heartworms. It is very specific, but not as sensitive as the antibody test. A positive test indicates that heartworms are present, but a negative test does not mean that they are absent. Because the cat must have at least two adult female worms present to have a positive test result, a negative test may mean that the cat has only a small number of worms or that all the worms present are male. The low worm burdens often seen in infected cats results in a high number of cats testing false-negative on antigen tests.

In summary, a diagnosis of feline heartworm infection is confirmed when both the antibody and antigen tests are positive, but not all infected cats will test positive on both tests.

3. A blood sample can be tested for the presence of microfilariae. However, less than 20% of cats with heartworms have microfilariae in their blood, and microfilariae are only present for one to four weeks. Although a positive test is diagnostic, a negative test means little.

4. An eosinophil count can be measured in cats suspected of harboring heartworms. Eosinophils are a type of white blood cell that occur in increased numbers when certain parasites are present. They are elevated in the presence of heartworms, but this elevation only occurs for a few months. This test is not specific, since cats with allergies or other parasites (e.g., intestinal worms, fleas) also commonly have increased eosinophil counts. An eosinophil count is often performed with a complete blood cell count (CBC) and serum chemistries during the initial diagnostic workup.

5. Radiographs (X-rays) permit your veterinarian to view the size and shape of the heart. They also allow measurements on the diameter of the pulmonary arteries. Many cats with heartworms have an increased size of the pulmonary arteries, or the arteries may appear blunted (suddenly come to an apparent stop) on their way to the lungs, due to worms obstructing them. However, many other cats with heartworms have no abnormal findings on their radiographs, especially early in the infection.

6. Cardiac ultrasound or echocardiography allows the internal structures of the heart and surrounding vessels to be directly viewed and the condition and function of the heart to be assessed. In some cats, adult heartworms can actually be seen; this finding confirms the presence of heartworms. However, because most infected cats have a low number of worms this does not occur often.

Can feline heartworm disease be treated?

There is no drug approved for treating heartworms in cats. One of the drugs used for treating dogs has been used in cats, but it causes significant side effects.

To complicate things further, when the adult heartworms die during this treatment, they pass through the pulmonary arteries to the lungs where the reaction to the dead and dying worms can cause sudden death. Thus, there is a dilemma when a cat is diagnosed with heartworms. One of three choices must be made:

1.  Treat with the drug designed for dogs. However, this drug can have serious side effects in cats including acute pulmonary (lung) failure and death. For this reason, this approach is not recommended.

2. Treat the symptoms of heartworm disease and hope the cat outlives the worms. Since heartworms live in a cat for about two to three years (as opposed to five to seven years in dogs), several months of treatment are needed. When cats are in a crisis, they are treated with oxygen and corticosteroids (cortisone) to relieve the reaction occurring in the pulmonary arteries and lungs, and, if needed, drugs to remove fluid from the lungs (diuretics). When they are stable, they are treated continuously or periodically with corticosteroids. In many cats, this treatment will reduce clinical signs and improve their quality of life. However, the threat of an acute crisis or sudden death always exists.

3.  Surgical removal of the heartworms is currently the recommended treatment for cats with severe signs of heartworm disease. This procedure must be performed by a specialist, often at a college of veterinary medicine. Studies have shown that up to 40% of cats may die during or after this procedure, so surgical heartworm removal is typically reserved for those cats who have severe disease and a poor prognosis without surgery.

Is there a way to prevent heartworms?

The reasons that heartworm prevention is now recommended for all cats are:

1. Diagnostic Difficulty. Diagnosing heartworms is not as easy in cats as in dogs.

2. Unknown Incidence. Heartworms are not nearly as common in cats as they are in dogs. However, they are probably more common than we realize. As we look more aggressively for heartworms in cats with better and better tests, we expect to find that the incidence is greater than previously thought. Studies have shown that up to 15% of all cats in certain locations, regardless of whether they are indoor or outdoor cats, have been exposed to heartworms.

3. There Is No Good Treatment. There is simply no good treatment for heartworm-infected cats. Effective drugs are not available, and cats that seem to be doing well may die suddenly. Treating heartworm infections in cats is risky at best, and not treating these cats is just as risky. It will take about two years for the parasitic infection to be eliminated in the cat, and serious clinical signs can suddenly appear at any time during this period.

4. Prevention Is Safe and Easy. Cats given heartworm prevention drugs have not shown signs of toxicity. There is a wide margin of safety, even in kittens as young as six weeks of age.

5. Indoor Cats Get Heartworms Too. Exposure to mosquitoes is required for transmission. Cats do not have to be exposed to cats or dogs infected with heartworms. Obviously, cats that go outdoors are more likely to be exposed; however, an infected mosquito can easily get into the house and infect the cat.