Hemophilia A & B in Dogs

What is Hemophilia A? 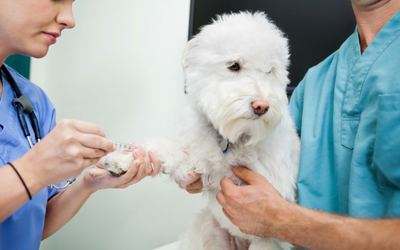 Hemophilia A is the most common of the inherited blood clotting disorders in dogs. It is the result of a mutation of a specific gene, causing a deficiency of blood clotting Factor VIII (8). Factor VIII is important for normal blood clot formation. A dog with this mutation is incapable of producing functional Factor VIII, which interferes with the blood clotting cascade.

How are dogs diagnosed with Hemophilia A?

The laboratory test called APTT (activated partial thromboplastin time) is a screening test for clotting disorders, but cannot distinguish among the various types of hemophilia. The APTT must be performed on a specially prepared blood sample. Beyond the APTT, a specific diagnosis of Hemophilia A is made by measuring the activity of Factor VIII.

Can a Dog with Hemophilia A be bred?

A male with the abnormal Factor VIII gene on his only inherited X chromosome will himself have Hemophilia A and will transmit the abnormal gene to all of his daughters but none of his sons (the male offspring get their single X chromosome from the mother).

A female dog with one normal and one abnormal Factor VIII gene will not exhibit Hemophilia A, but will pass along the abnormal gene to ½ of both male and female puppies, on average.

Most commonly, when Hemophilia A is expressed in a line of dogs, it is passed along when asymptomatic females breed with normal males. From these pairings, about 50% of male offspring will have Hemophilia A and about 50% of females will be carriers. Because of the heritability pattern of Hemophilia A, a laboratory analysis should be combined with a pedigree analysis in order to develop breeding recommendations. Newer genetic tests exist that screen for the mutation in certain breeds.

What about Hemophilia B?

Like Hemophilia A, Hemophilia B is a sex-linked recessive trait. The gene for Factor IX is carried on the X chromosome, so the inheritance pattern is the same as that for Hemophilia A. The blood level of Factor IX can be measured in order to make the diagnosis of Hemophilia B.

Carriers of Hemophilia A and B do not themselves exhibit symptoms of blood clotting deficiencies, but they should not be used in breeding programs. Affected dogs cannot be cured. Following trauma or surgery, these dogs may need blood transfusions of whole blood or blood products that provide clotting factors. Hemophilia A and B are diseases that are best prevented, so screening of potential breeding animals is important.