What is acute hemorrhagic diarrhea syndrome? 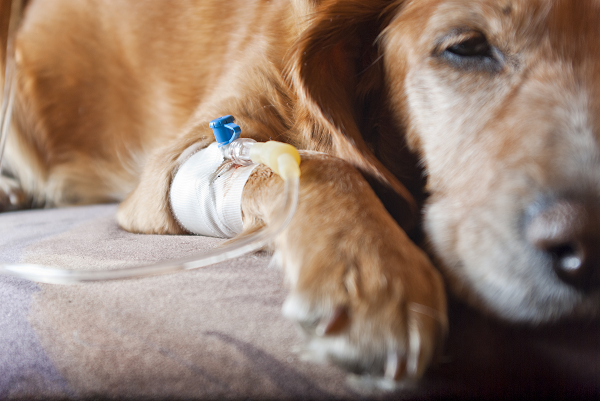 Acute hemorrhagic diarrhea syndrome (AHDS), also known as hemorrhagic gastroenteritis (HGE), is an acute (sudden) disorder of dogs characterized by vomiting and bloody diarrhea. Some dogs may have a painful abdomen, decreased appetite, lethargy, or fever. Most cases occur without warning in otherwise healthy dogs.

AHDS can affect any breed, age, size, or gender but it is most common in small and toy breed dogs. Young Miniature Poodles, Miniature Schnauzers, and Yorkshire Terriers seem to be more commonly affected. Other breeds commonly affected include the Pekingese, Dachshund, Maltese, Cavalier King Charles Spaniel, Bichon fries, Shetland Sheepdog, and Poodle.

Other possible causes of AHDS include:

Recent research indicates that AHDS may be an allergic reaction (food or inhaled). Dogs who experience AHDS may be more prone to developing AHDS again in the future.

How is AHDS diagnosed?

The diagnosis of AHDS can be challenging and may ultimately require intestinal biopsies in persistent cases. Because there are so many possible causes of AHDS, evaluation usually requires a complete blood count (CBC), biochemical analysis of the blood, urinalysis, radiographs (X-rays), coagulation tests, fecal evaluation, and ultrasound or endoscopic examination of the gastrointestinal tract.

"Diagnosis is often a process of eliminating other causes of bloody stools and gastrointestinal distress."

The packed cell volume (PCV) or hematocrit (HCT)—a measurement of the proportion of red blood cells in the blood—is often greater than 60% in dogs with AHDS. Most dogs have a normal HCT of 37% to 55%. An elevated HCT in combination with a low or normal total protein is an important clue that a dog may have AHDS. Blood bicarbonate levels, blood pH levels, and serum chemistries also give indicators that AHDS may be present.

Diagnosis is often a process of eliminating other causes of bloody stools and gastrointestinal distress.

How is AHDS treated?

Dogs with AHDS will appear severely ill and, if left untreated, may die. In most cases, the disorder appears to run its course in a few days if the dog is given appropriate supportive care. Intravenous fluid therapy with potassium and electrolyte supplementation provides the foundation of AHDS therapy. Subcutaneous fluids (fluids given under the skin) are not usually considered adequate to meet the significant fluid requirements of most dogs with AHDS. Most dogs are not fed during the first 24 hours of treatment and are often given antibiotics to combat potential secondary intestinal infection.

Additional therapy for AHDS may include gastrointestinal protectants, such as sucralfate (Carafate®, Sulcrate®), and anti-vomiting medications, such as maropitant (Cerenia®). In severe cases, plasma (the liquid portion of blood) or colloids may be needed to correct severely low blood protein levels. Probiotics and pain medications are also sometimes used in the treatment of this condition.

"If intravenous fluid therapy is not given, the dog’s red blood cell count will continue to elevate because of dehydration."

If intravenous fluid therapy is not given, the dog’s red blood cell count will continue to elevate because of dehydration. In this situation, the dog is at risk for a potentially fatal clotting disorder called disseminated intravascular coagulation (DIC). Once DIC has begun, it is often irreversible and may result in death.

Can AHDS be prevented?

Since the cause is unknown, it is difficult to give advice on prevention. However, reasonable suggestions are to feed a high-quality commercial diet, refrain from giving your dog extra foods or treats your dog is not accustomed to, use parasite preventive medications as directed by your veterinarian, and generally provide a low-stress environment.