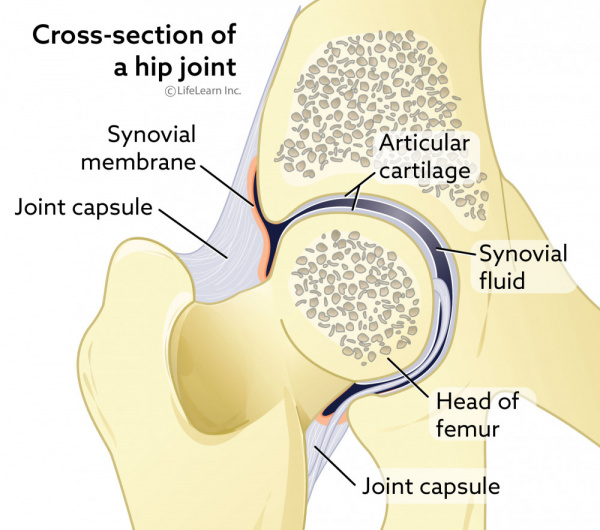 normal hind limb movement. The joint itself is comprised of the acetabulum which is a cup shaped depression in the pelvis (this forms the ’socket’) and the femoral head which is part of the femur (thighbone). The femoral head forms the ’ball’ of the ’ball and socket’ joint. The stability of the hip joint comes from the joint capsule, a short ligament that connects the ball to the socket and the muscles that surround the hip.

What is meant by hip dislocation?

"The most common cause of hip dislocation is blunt force trauma such as a fall or an automobile injury."

An increasing number of cats, especially pure-breed cats, are being diagnosed with hip dysplasia (poor hip joint conformation) similar to that seen in dogs. Hip dysplasia may predispose an individual cat to hip dislocation.

What are the clinical signs of a dislocated hip?

With some traumatic injuries, your cat may have been missing from home for a few days because it may have had difficulty returning home. In addition to having a dislocated hip, there may also be other injuries, some of which may be more serious. Most cats with a hip dislocation will have severe hind limb lameness and may not be able to put any weight on the affected limb. The affected limb is often carried in a flexed (folded or pulled up) position and may appear shorter than the other limb.

How is a hip dislocation diagnosed?

"A diagnostic X-ray will show the direction of dislocation, and whether a fracture of any part of the hip joint has occurred."

The diagnosis is confirmed by a radiograph (X-ray). A diagnostic X-ray will show the direction of dislocation, and whether a fracture of any part of the hip joint has occurred. If a fracture is present, it may be more difficult to repair the dislocation. If your cat has other, more serious or life-threatening injuries, these will be treated before your veterinarian will even consider addressing the dislocated hip.

What is the best treatment for a dislocated hip?

In most cases of hip dislocation, it is desirable to replace the femoral head in the acetabulum. The only time when it may be reasonable not to do this is if your cat has some other illness or if there are other factors that make anesthesia too risky to undertake. If the hip is left dislocated, a false joint will form, but the cat will have a permanent lameness.

In many cases, it is possible to replace the femoral head in the acetabulum by manipulation under general anesthesia (closed reduction). The success of a closed reduction increases if the dislocation is recent (i.e., the injury is less than 72 hours old). After the dislocation is reduced or replaced, a supportive wrap or bandage will be applied to immobilize the leg and prevent the hip from reluxating (popping back out). This bandage or support wrap will remain in place for 4 to 14 days. The occasional cat may not tolerate this bandage well. The cat must be closely supervised, and its activity must be severely restricted, and to ensure that the bandage is not too tight and that the cat is not too distressed by the support wrap.

In some cases of hip dislocation, either it will be impossible to replace the femoral head in the acetabulum or it will keep slipping out of the socket. In these cases, surgery is indicated to repair the injury. The specific surgical repair technique will depend on the nature of the injury and the preference of the veterinary surgeon.

What post-operative care does my cat need? 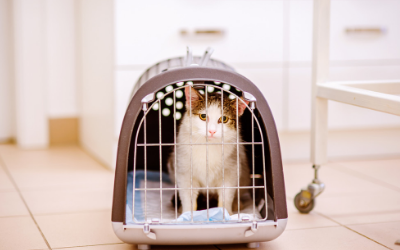 If it has been possible to replace the femoral head back into the acetabulum without surgery, your cat will most likely be prescribed a short course of pain relief medications to be administered by mouth.

"Your cat will need to be confined to strict cage rest."

In addition to this, your cat will need to be confined to strict cage rest. During this time, your cat may have a bandage on the affected leg, which should be carefully inspected daily to make sure that there are no problems with it. Your veterinarian will give you specific instructions for the care and monitoring of any bandages that were placed.

If your cat requires surgery, there are many techniques that might be used to repair the dislocation. A bandage will likely be placed and it will be necessary to confine your cat as directed by your veterinarian.

What is the long-term prognosis for my cat?

If the femoral head has been successfully replaced and the correct post-operative treatment has been adhered to, it is unlikely that the hip will redislocate. In many cases, the hip joint will regain full function and will require no further treatment. However, some cats may develop a stiff or arthritic hip months or years after the dislocation, and this may require additional treatment. Cats that were unable to have the joint successfully replaced will often limp or have limited use of the limb. Most of these cases will eventually require treatment for osteoarthritis due to their injury.