What is Horner's syndrome?

Horner's syndrome is a common neurological disorder of the eye and facial muscles. The condition usually occurs suddenly and typically affects one side of the head but can be bilateral (affect both sides of the head) in rare cases.

What are the clinical signs of Horner's syndrome? 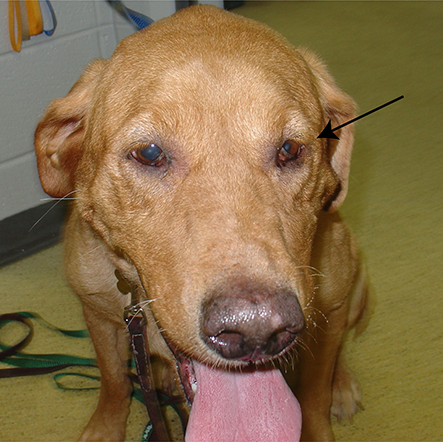 The most common clinical signs of Horner's syndrome are:

Horner's syndrome is due to a dysfunction of the sympathetic nerves of the eyes and surrounding facial muscles. This is part of the autonomic nervous system, which helps to control normal functions such as blinking, muscle tone, etc.

"Horner's syndrome is often classified as idiopathic, which means it is without known cause."

There are many reasons for Horner's syndrome. The dysfunction may be caused by damage to the sympathetic pathway as it runs through the neck or chest. This may be due to an injury such as a bite wound or blunt trauma, a tumor, or intervertebral disc disease. Middle or inner ear disease (otitis media or otitis interna) can also cause Horner's syndrome. Other causes for an elevated or protruding third eyelid gland include: tetanus, facial nerve paralysis, facial muscle atrophy, and dehydration. However, Horner's syndrome is often classified as idiopathic, which means it is without known cause.

The onset of Horner's syndrome can be sudden and without warning. In some cases, the dog may have eye symptoms, as well as excessive salivation and/or difficulty eating on the affected side.

Does it affect any particular breed or age of dog?

Any dog can develop Horner's syndrome although Golden Retrievers and Collies have a somewhat higher incidence.

Most cases of Horner's syndrome will resolve spontaneously; however, it is important to treat any underlying disease. There are several diagnostic tests that will be performed to determine if there is an underlying cause in your pet including an eye and ear exam, radiographs (X-rays) of the skull and chest, and possibly advanced imaging such at CT scans or MRIs. Pharmacologic tests may include phenylephrine drops placed in the affected eye to help localize the source of the problem.

What is the recovery rate?

If the lesion is not due to any pathological cause, a slow recovery lasting up to several weeks to 4 months can be expected.

What is the outlook?

The outlook is very good, if there is no underlying pathological cause present. The condition tends to be self-resolving, but may take weeks or months depending on the severity.