How Dogs Use Smell to Perceive the World
By Lynn Buzhardt, DVM

The nose is a prominent canine facial feature…long, short, black, pink. Noses vary, but they all have one thing in common. Noses are key to canine survival.

Why are noses important to dogs? 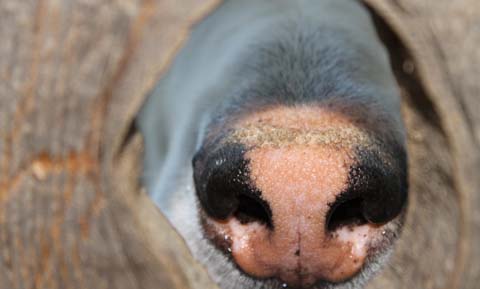 The canine nose does more than smell the roses. While humans primarily depend on their vision, dogs use both sight and smell to assess their surroundings and communicate. People spend more time interpreting visual data than olfactory information. Dogs are just the opposite.

Dogs devote lots of brain power to interpreting smells. They have more than 100 million sensory receptor sites in the nasal cavity as compared to 6 million in people, and the area of the canine brain devoted to analyzing odors is about 40 times larger than the comparable part of the human brain. In fact, it’s been estimated that dogs can smell anywhere from 1,000 to 10,000 times better than people.

While noses don’t actually speak, they do communicate. With a single sniff, noses interpret an entire story without words by using amines and acids emitted by dogs as the basis for chemical communication. The chemical aromas communicate what a dog likes to eat, and identify gender and mood. By simply smelling, a dog can determine if a new friend is male or female, happy or aggressive, healthy or ill. Dogs get a general idea about each other with a quick sniff, but get more detailed information by getting up close and personal. That’s why some dogs sniff private parts of the anatomy!

Dogs also have a good scent memory that can identify other dogs they haven’t seen for years – and can remember which of them was the dominant member of the pair. When dogs belonging to the same family are separated for a while, they use sense of smell to catch up on things. Changes in odors may convey where the dog went, what he ate, and what he did.

When in a new territory, a dog can sniff a tree and determine what other dogs live in the neighborhood. They can smell a visitor’s pant-leg and get a good impression of where the person lives and whether he has pets at home.

Dogs also have a great homing instinct that depends on their ability to smell. Since dogs move their nostrils independently, they can determine the direction of an odor and use their sense of smell like a compass.

"The dog’s sense of smell is so adept that a
blind dog has much less difficulty adjusting
to the loss of vision than a human does."

Humans each have a unique innate scent that enables dogs to tell one person from another. Our dogs don’t need to see us to identify us. The dog’s sense of smell is so adept that a blind dog has much less difficulty adjusting to the loss of vision than a human does.

Dogs also sense fear and anxiety via their noses. When we are stressed or scared, we secrete the fight-or-flight hormone, adrenaline, which dogs detect even though we can’t smell it. Also, when we are anxious, we have increased heart rate and blood flow which carries body chemicals to the skin surface where dogs can pick them up more easily. So, it’s no use trying to mask your true feelings from your canine companion. His sense of smell will not be fooled.

Why do dogs “smell better” than humans?

Unlike humans, dogs have an additional olfactory tool that increases their ability to smell. Jacobsen’s organ is a special part of the dog’s olfactory apparatus located inside the nasal cavity and opening into the roof of the mouth behind the upper incisors. This amazing organ serves as a secondary olfactory system designed specifically for chemical communication. The nerves from Jacobsen’s organ lead directly to the brain and are different from the other nerves in the nose in that they do not respond to ordinary smells. In fact, these nerve cells respond to a range of substances that often have no odor at all. In other words, they work to detect “undetectable” odors.

"With a quick sniff, a pup placed between two
females will migrate to the mother that gave birth to him!"

Jacobsen’s organ communicates with the part of the brain that deals with mating. By identifying pheromones, it provides male and female dogs with the information they need to determine if a member of the opposite sex is available for breeding. It also enhances a newborn pup’s sense of smell so he can find his mother’s milk source, and allows a pup to distinguish his mother from other nursing dogs. With a quick sniff, a pup placed between two females will migrate to the mother that gave birth to him!  Pups also have heat sensors in their noses that help them locate their mothers if they wander away.

The two separate parts of the dog’s odor detection system, the nose and Jacobsen’s organ, work together to provide delicate sensibilities that neither system could achieve alone. When the dog curls his lips and flares his nostrils, he opens up Jacobsen’s organ, increases the exposure of the nasal cavity to aromatic molecules and essentially becomes a remarkably efficient smelling machine.

Why do dogs have wet noses?

The canine nose works best when it is damp. The wet outer nose and mucus-covered nasal canal efficiently capture scent particles. Moisture is so important to the canine sense of smell, that dogs will lick their noses when they become dry. Smart canines don’t want to miss out on important information due to a dry nose!

So, the bottom line is….we love our dogs and their cute faces with warm, wet noses. But part of why we love them is their unique ability to relate to their world and to us through their sense of smell.